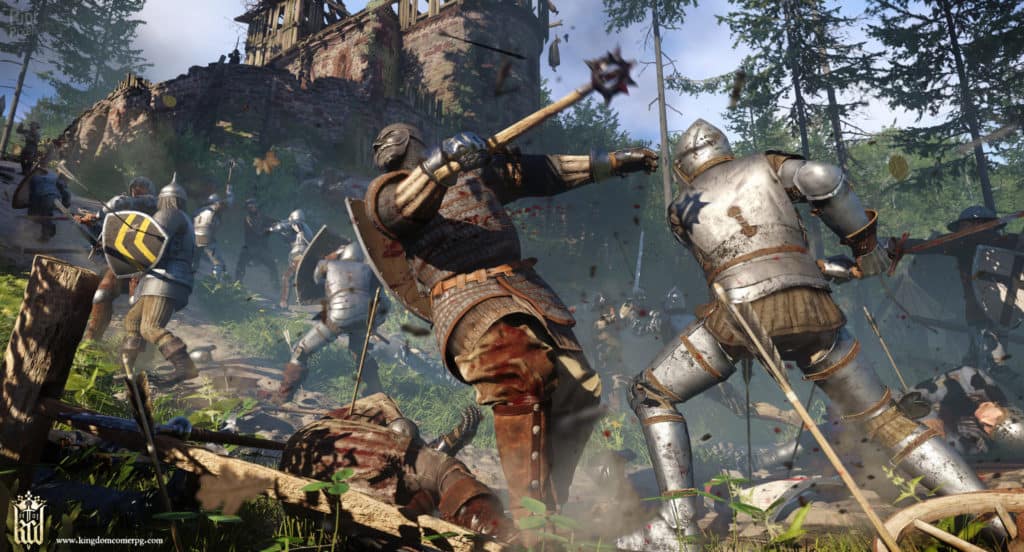 Reader, I am bored. Because, despite the lead dev having more edge than U2, Kingdom Come: Deliverance isn’t offensive or radical, it’s just boring. This is partly because in Kingdom Come: Deliverance you are roleplaying living in a medieval setting, which was by all accounts a pretty terrible period to live in. We didn’t even do wars in a civilised way with drones, or have nice things like air conditioning or Mr. Kipling cakes, and all the beds were made of straw. Other games with a similar setting introduce mages and dragons to inject some excitement, at least. Bohemia in 1403 is an unforgiving mistress: it rains a lot, your clothes get muddy, and you must eat and sleep regularly or suffer the consequences (being tired and hungry).

This is also partly down to protagonist Henry, a sentient loaf of farmhouse white who manages to go from scrub to knight in little more than a month, if he really applies himself to the main storyline and doesn’t spend too much time doing the (more interesting) minutiae in the villages around the place. Hal to his friends, Henry is a clearly defined character that you inhabit, and that clearly defined character is a God-fearing peasant with a bad haircut, left to fend for himself after his entire village is razed by a marauding army. There may be some conflict between how you want to play Henry, for which you are given a fair amount of freedom, and how Henry himself acts. When you start the game you have approx. rack all to your name and are in a bad way, so my Henry started to pragmatically loot from the dead bodies of his former friends and family and, in a cutscene that followed almost immediately, railed against another man for, er, looting from dead bodies.

The game doesn’t really start until a few hours in, when Henry has escaped to a neighbouring city with other refugees from his town, and ends up in service to his Lord, starting off odd jobbing and ending with decidedly more critical missions. The main quest is where you’ll encounter quite heavy incidents of combat, which uses a similar system to Ubisoft’s For Honor: choose a direction to swing in with a heavy or a light attack, and choose a direction to block in by paying attention to your opponent. You can chain attacks by pressing swing just as your first attack hits, feint by switching the direction of your attack, block, parry, and dodge, you can choose weapons based on what your opponent is wearing (a mace works better against heavy armour than a sword, for example) and aim for their exposed body parts)…

… but none of it really matters because the most effective tactic in the game is to run backwards from the enemy in front of you twatting arrows into their face until they fall over. This is similar to how you can ignore the nourishment system and not bother carrying any food because every town has several pots of food bubbling in the open. You can even walk into people’s houses and eat from their hearth. They are less perturbed by this than you might expect or the game suggests they would be. KC:D puts in detail that it then renders almost irrelevant. People might remark on the state of Henry’s clothes, but they’ll still give him quests to do.

Some of the more billed-as-realistic parts of the game are very nice ideas. You get better at things the more you do them, like in an Elder Scrolls game, but these include not just the expected fare like combat, stealth, strength and so on, but skills at specific weapons or things like Herbalism and Reading. For Alchemy you have to follow a strict set of instructions at a workstation, but to read the instructions you have to first learn to read, which made me go ‘Huh. Cool.’ The more helpful you are to a town, the more the residents will like you, and will start greeting you by name when next you ride through, which is nice, and more fun than Hal’s main, grim, quest for vengeance.

Still, though, the most fun you’ll have in Kingdom Come is when it embraces that it’s a video game and stops leaning on being this magnificent work of realism set in 15th Century Europe. There’s a bit, as part of the main quest, where you can end up getting smashed with a priest who throws up off his own bell tower, and the pair of you wake up in the morning ferociously hungover. He yells, ‘Mass! I have to do mass!’ and then you have to help him do mass because he can barely stand up straight. It’s possibly the best bit in the entire game.  Sadly, quite a few quests are padded by placing successive objectives far apart from one another. I should go there right away, says the quest log, referring to a town currently half a day’s travel away at maximum one horsepower.

Bohemia as a country is actually a nice place to travel through, especially around dawn (which is accompanied by a piece of music that I very much enjoyed). The forests feel realistically foresty and it’s quite nice galloping along a path through fields of waving grass and flowers. Unfortunately the game struggles a bit when you’re travelling at speed because it shipped in a bit of a state, and the longer I’ve played the game the more problems it has. I’ve encountered frequent freezing and a few annoyingly placed crashes, a truly hilarious amount of pop-in (especially on NPCs’ hats, which is very funny), and invisible walls appearing and disappearing in seemingly random places. Your horse will get stuck in some but not all bushes, and all but not some fences. There is only one kind of dog and one kind of pig in the whole country, and they often stand around in pairs looping through the same animation simultaneously. NPCs can be found walking in circles in a room for (in-game) days.

Kingdom Come: Deliverance will probably be finished in about six months of patches time. If you’re selling a game on it being super historically accurate, which is why you haven’t put any black people in it, it’s advisable to make sure it has fewer bugs than the Amazon basin. It won’t make the bugs better or worse, but it does make them a lot funnier if you don’t. But even without the technical problems, the idea that Kingdom Come: Deliverance is new or refreshing seems, appropriately enough, old fashioned.

Available on: Xbox One (reviewed on), PC, PS4

Kingdom Come: Deliverance has some nice ideas and pretty countryside, but is ultimately still buggy, broken and, perhaps worst of all, boring.
4 Some cool ideas buried in there My God, it's full of bugs Most of Henry's life is boring Henry is boring