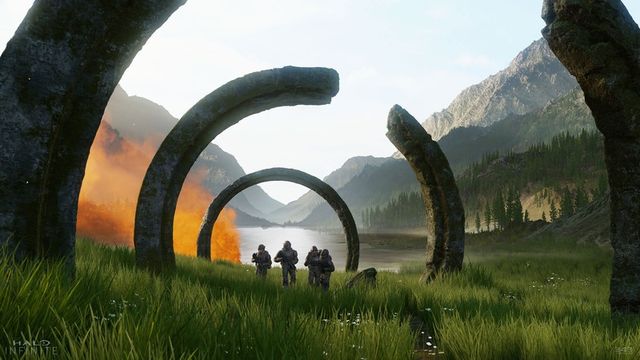 Halo Infinite, Spider-Man, and PUBG are your top gaming stories this week

Never mind France winning the World Cup on Sunday, everyone’s only really talking about one thing this week: The new X-Factor UK judges lineup. Yep, Simon Cowell’s karaoke circus has booted out Louis ‘You look like a popstar, you sound like a popstar, you are a popstar!’ Walsh and Sharon Osborne, instead replacing them with the least famous member of One Direction and Mr. and Mrs. Robbie Williams. And it’ll still probably get battered in the ratings by Strictly Come Dancing.

Elsewhere, The Walking Dead bosses have finally confirmed that Andrew Lincoln is leaving the show, which pretty much puts the nail in the coffin as far as I’m concerned. With Lauren Coen also poised to leave in Season 9, and only boring Daryl Dixon left to pick up the leading role, the show’s decomposing at a faster rate than its own zombies.

Finally, Love Island’s Sam and Georgia have abandoned ship. In case you forgot, Georgia is the one who thought that carpentry was a job about laying carpets. Such a great loss.

Sony Bend is staffing up for a new AAA project

I’ll be honest, Days Gone is looking a little underwhelming right now. While there’s clearly oodles of talent at Bend, the game looks like a Frankenstein’s Monster of ideas plucked from every open-world game that’s been released in the past five years. It’s a stunner, but something’s missing. Still, regardless of how its not-zombie actioner shapes up, it looks like the studio is wasting no time in knuckling down on its next project, which a job listing confirms is a new IP. Not sure what this says about their confidence in Days Gone – I figured Sony was hoping for another franchise here, much like Horizon  – but it looks like a sequel is not in the pipeline.

For many, Nathan Fillion IS Nathan Drake. He’s got the acting chops, looks kinda similar, and as this fan film proves, can rock a Henley shirt like few others. Okay, so he’s apparently not appearing in the actual Uncharted movie with Tom Holland, but for me (and a lot of other people, apparently), the 15 minutes of action proves unequivocally that Fillion could helm a proper Uncharted movie. It’s just a shame it’s probably ten years too late.

Looks like Crackdown 3 will definitely be out in February

The road to Crackdown 3 has been a bit bumpy to say the least. Originally announced in 2014, the Terry Crews-fronted destruction-’em-up was meant to be out in 2016, although it’s since been pushed back more times than a Guns ‘N Roses album. Fortunately, Eurogamer sources have revealed that Microsoft isn’t tolerating further delays, although that’s only really good news if Crackdown 3 is in a half-decent state when it ships. Make no mistake: this is a game that needs to deliver the goods, as Camp Xbox is hurting for a massive exclusive right now.

Okay, let’s be honest; this most probably is a new God of War. Unless Sony Santa Monica is planning God of War: Storytime with Kratos DLC (to be fair, I’d buy it; I love hearing Kratos waffling on about frogs giving backies to scorpions), we’re definitely getting a sequel. And why not? God of War was a monster success, shifting millions of copies and becoming a critical darling in the process (we also loved it). Plus, we already know that Sony is keen on continuing the whole Kratos/Atreus dynamic, with the Norse setting also probably coming back. Make it happen, lads.

Battle Royale is already pretty ubiquitous thanks to Fortnite and PUBG, and with the likes of Battlefield V and Call of Duty: Black Ops 4 jumping on the bandwagon, I’m actually relieved that Halo Infinite isn’t going along for the ride too. The Halo games already have a killer multiplayer component, and so I’d much rather 343 continue to innovate in this respect than simply cough up a battle royale mode just because every Tom, Dick, and Harry is doing it.

Guerrilla Games has had a pretty stellar 18 months or so, with Horizon: Zero Dawn emphatically proving that single-player games still have a place in the industry, not to mention the fact launching a new IP isn’t automatically a death sentence. Evidently spurred on by its success, the company is now looking to trim its development time for major titles (it outlines both new and existing properties, so presumably that means Horizon 2 and another Killzone). If that means getting a slice of the triple-A pie from the Amsterdam studio every two-three years, then I’m game.

Spider-Man is getting a Limited Edition PS4 Pro bundle

Let’s be honest here: Most custom skin PS4s are either 1) ugly as sin or 2) totally underwhelming. Or possibly a combination of both. The Spider-Man Amazing Red PS4 bundle though, to be fair, looks the dog’s bollocks. You’ve got the iconic Spidey logo on a red background; simple, but effective. What more could you want? It’s stylish while not being ostentatious just for the sake of it. Good job, Sony.

I’m not a PUBG player. I don’t get the whole battle royale craze, and I’m already getting enough chicken dinners as part and parcel of my daily caloric intake. However, a charity stream with a $1 million pool prize is something I can doff my cap to, as I imagine is the case with anyone regardless of how you feel about the last-man-standing shooter. It’s not for a predetermined cause either; the winners can donate the prize to the organisation of their choice, which is bloody brilliant. Fair play to PUBG Corp./Bluehole for this one.

Have a spiffing weekend, people!