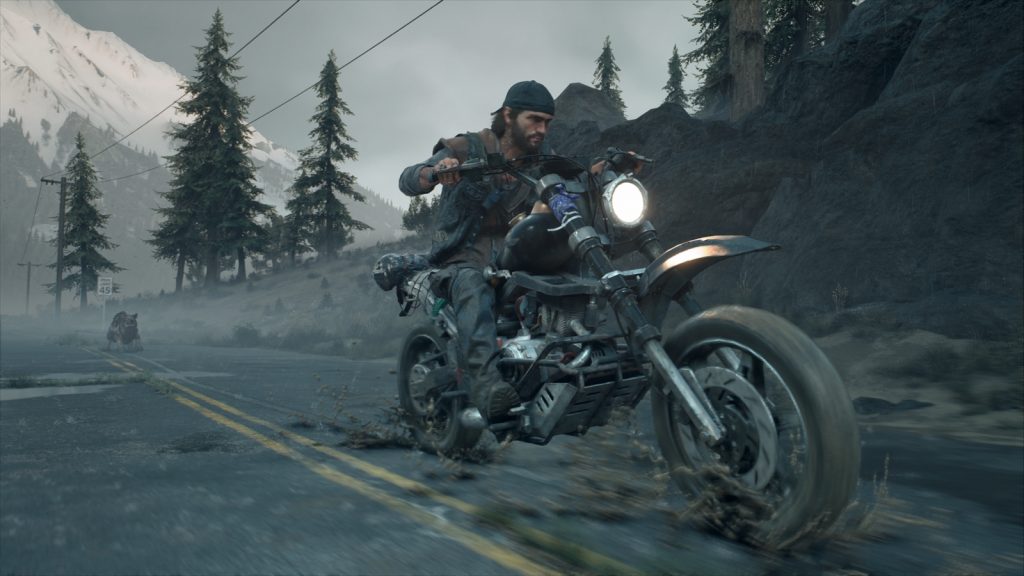 It’s the end of the world in Oregon, and by the looks of things it came not with a bang, nor a whimper, but under a great set of churning tyres. Days Gone, the new game from Bend Studio, is a muddy one. Its open world is spread out in splashy tracts of woodland, and the zombies ravening through it are hairless, pale, and pink, like worms sprouting from the soil. The hero is a biker called, believe it or not, Deacon St. John – a choppy scramble of sounds and syllables, none of which approach what you’d call a name. At first, he seems the dour and determined sort. ‘Do you know why we keep going?’ he asks, trying to encourage an ailing ally. ‘Because what the hell else are we gonna do?’

Well, fortunately for us, the answer is: plenty. Days Gone chews off chunks of inspiration from a horde of worthy sources: Far Cry’s outpost-capturing sandbox, the teeming throngs of Left 4 Dead, and the combat and dramatic salt of The Last of Us. And it borrows well. The action is set, rather fittingly, in a place called Farewell – a fictitious wilderness scattered with settlements. These range from ramshackle hamlets snarled up in barbed wire to military-style barracks fortified with log fences (think Croydon and you’re halfway there), and they bustle with job opportunities. Folks have need of Deacon’s talents, which consist of (a) finding someone/something, (b) killing someone/something, and (c) sneaking around someone/something.

Things are occasionally spiced up with a bike chase, or a tracking minigame that sees Deacon in the dirt, sniffing around like a gundog. But the good news is that the action doesn’t need much spice; the weapons are punchy (with special notice given to the baseball bat, which can be fitted with an optional buzz saw blade), and the whole thing is furnished with ingenious flourishes. There’s the slight zoom when Deacon clicks into cover; the subtle visual language that’s built up without any UI (there’s crafting scrap under most car bonnets, melee weapons in the backs of trucks, and police cars almost always have ammo in the boot); and the way you swipe the DualShock trackpad to navigate menus – a touch that’s lofted above the charge of gimmickry through its sheer usefulness. 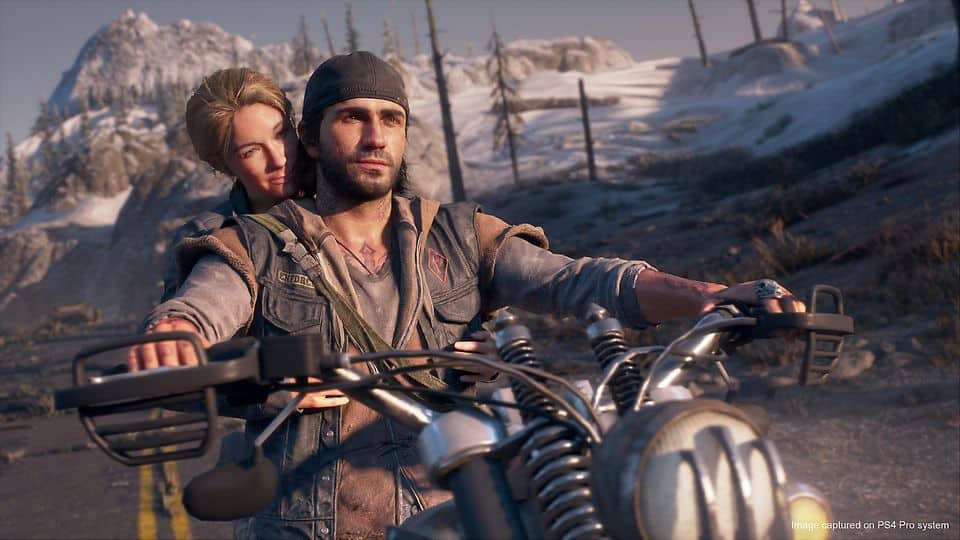 The more I played, the more I thought to myself, ‘This is actually rather good!’ But why the snobbery and condescension? Perhaps it’s because, in the months before its release, there seemed a mounting apathy for Days Gone, springing, perhaps, from its cynical-sounding pitch. The game looked to lean on two popular shows, Sons of Anarchy and The Walking Dead, both of which shuffled onwards, victims of renewal, into a state of undeath – hardly the freshest wells to draw from. On top of all that, its constituent parts have all been done to death; it’s only when they are combined, in execution, that the game’s appeal, and its originality, sets in. It has the pulpy power of a B-movie: granting pleasures that make us feel twinges of guilt.

None of which should come as a surprise; Bend Studio has always been the purveyor of brilliant B-games: portable versions of Uncharted and Resistance, to say nothing of the Syphon Filter series, which has long prowled in the shadow of Splinter Cell. Here you sense a developer that’s been given a degree of finance and freedom. Not since Syphon Filter has Bend commanded its own IP, and with Days Gone you can feel the strain of sensibilities – between the intimate focus, composed of small, smart mechanics and the big-budget, open world blockbuster.

As the action unfolds, we learn that Deacon is looking for his lost wife, Sarah, after the pair were separated at the first rasp of the outbreak. This plot is plaited with side stories – each camp crammed with its own dramas – all of which are wrapped around Deacon’s rough plan to ride North with his partner, Boozer (a fellow as gentle as his name suggests, whose skull is scrawled with tattoos). I found myself getting stalled and restless as the narrative hit a wheelspin halfway through. It feels as though someone had informed the game’s writer, John Garvin, that the pacing needed slackening to allow for a beefing up of content – a 15-hour story diluted down to a waterlogged 30. 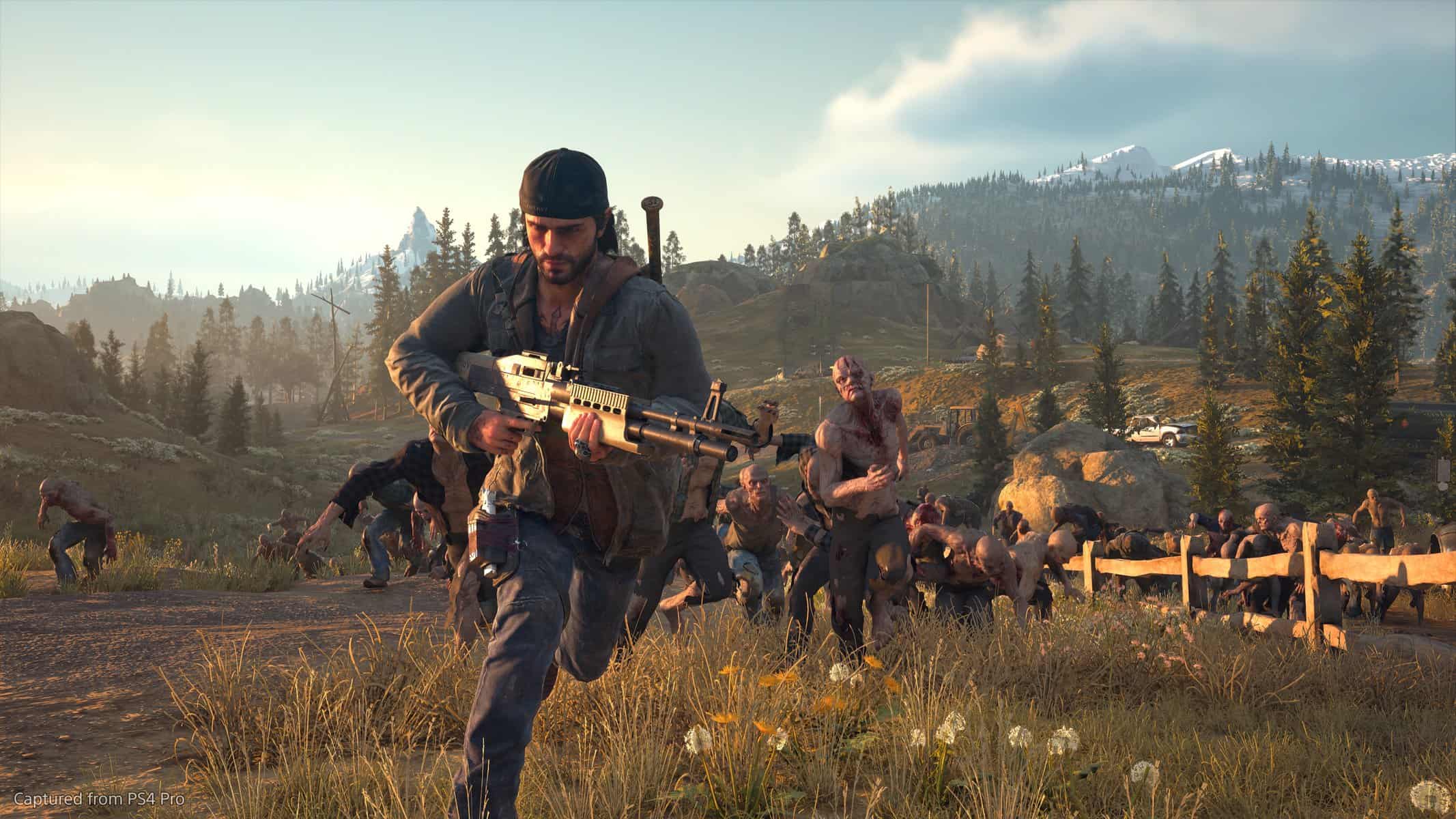 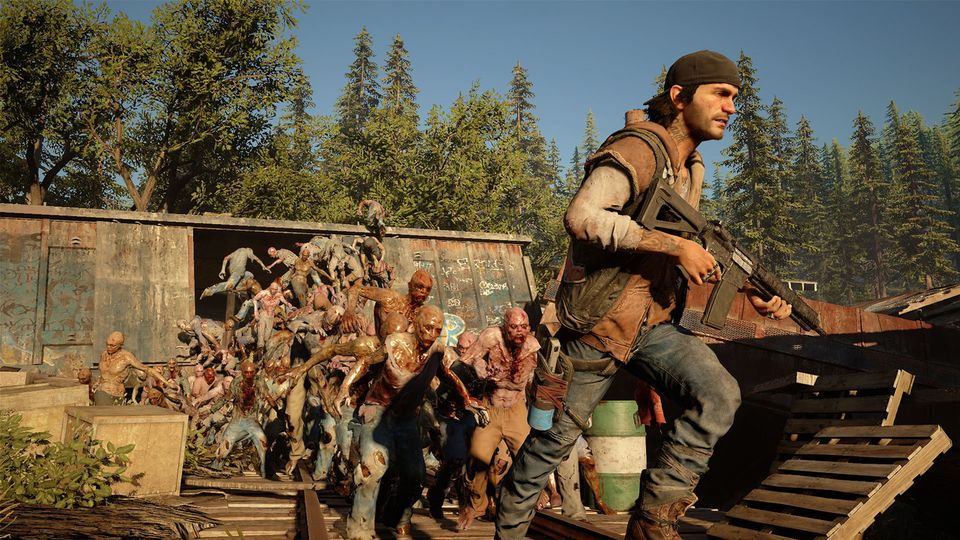 Further stresses of scope are apparent in performance. The action rumbles along at a rough and ready 30fps, frequently stuttering when things get fast or crowded – bad news in a game with a motorbike and a sea of ghouls. Elsewhere, there are bugs abound, one of which saw an NPC stood on a desk with his back to Deacon, as if he were talking out of his arse; the character in question is a conspiracy theorist, so the glitch wasn’t without its share of poetry. The initial 5GB patch was followed, a few days later, by a hefty 17GB update, which has salved – but not solved – the problem. After two delays, Bend must be relieved to get the game out the door, but it’s still disheartening to see its edges scuffed on the way out.

But then, of course, come the benefits of going big. The game’s world – called ‘The Shit’ by its characters – is proof of how fruitful gazing out the window can be. The artists at Bend, an Oregon-based developer, are clearly transfixed by the Pacific Northwest, and the game is rich in dungy browns and sap greens; there are snowy peaks, and plains of dusty desert. And there’s a plague-pit charm about it; nothing punctures rural beauty like realising you’re standing on a mound of half-buried plastic body bags, or bumping into an encampment of Rippers – a cult of zombie-worshipping loons with scarified flesh, who have a hobby of splaying people on spikes. Well, what the hell else are they gonna do?

Now, to any passing zombologists, my apologies. The creatures in Days Gone are not typical zombies; they run, for one thing, and they come in numerous forms. There are hulking brutes that sponge bullets; infected adolescents, called Newts, that scavenge like vultures; and the virus also infects animals, with wolves, birds, and bears all taking on more aggressive forms. The game’s centrepiece is the Horde: a hive-minded mass of stray freakers that cluster together like plaque and swarm you like a tsunami of skin. Seeing one approaching is a thrill, forcing you to either take up arms or get on your bike. 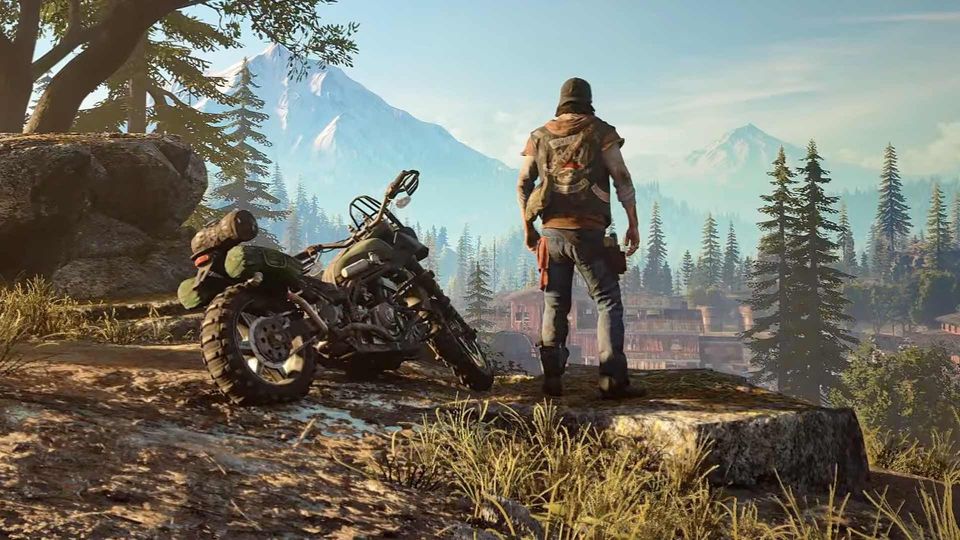 Exploration is undercut with wiry tension, as your freedom is measured by your fuel gauge. You can either alight at a petrol station pump or cast about for a jerrycan amidst the roadside wreckage. Getting off the bike feels risky, lest you attract unwanted attention in your rummaging. I recommend upgrading the beast – a muffler to quieten the engine, say, or a can of nitrous to blast you out of dodge. It’s all very satisfying, and whilst I may not abandon the London Underground in favour of a motorbike any time soon, I can’t promise I won’t peruse the tie-in fashion range, courtesy of Diesel.

If you’d have told me a few months back that I’d grow fond of a man called Deacon St. John, who wears a backwards cap and biker jacket, I’d have laughed you out the room. It helps that he’s portrayed by Sam Witwer, who has a clammy naturalism about him; it’s a relief to have a hero who shifts gears from hesitant to headstrong in a heartbeat. If you cast your mind back to Star Wars: The Force Unleashed, you might remember Witwer played Starkiller – an angry scion of the Galactic Empire, slashing his saber to uphold order. I’ll always remember him as a stricken soldier in The Mist, holed up in a supermarket as society crumbles around him. Here, he’s somewhere between the two, skirting the border between structure and chaos and belonging to neither camp. A biker at the end of days.

We have seen this figure before. As with most anything zombified, it has its roots in Romero. It’s impossible to forget the sight of Tom Savini and his squadron of bikers screeching through the drab halls of a shopping mall, in Dawn of the Dead. What happens to Hell’s Angels when there’s no more room in Hell? They didn’t seem to notice much difference. Rest assured, Deacon would consider them a disgrace; despite his image, he’s a fresh figure, as is Days Gone. ‘Don’t buy into all the biker stereotypes you see,’ he says early on. ‘We are actually quite charming.’ He’s right. 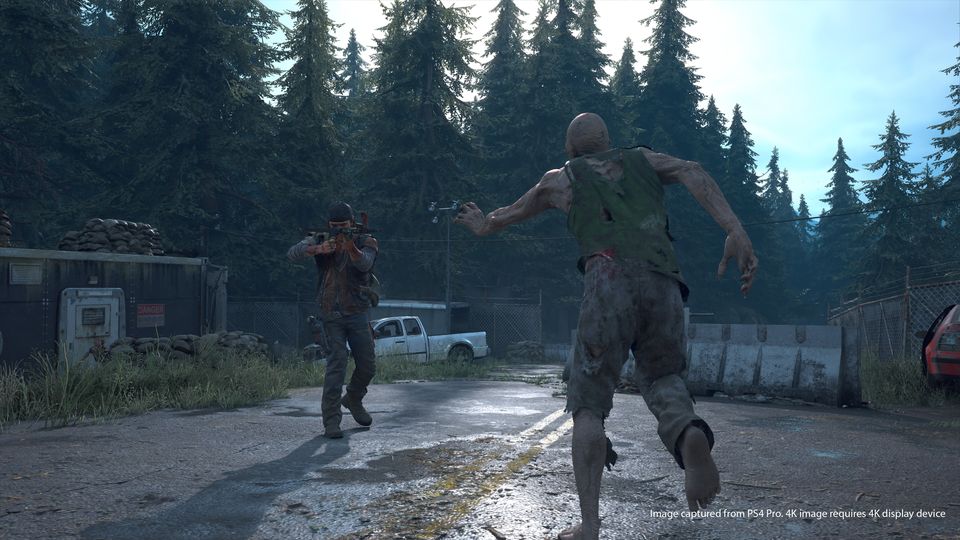 Days Gone is a grim, beautiful B-movie; its action and writing are full of pulpy thrills, and by the end of it, I found myself liking a character called Deacon St. John – an achievement in itself.
8 Beautiful, grim world Satisfying combat with clever touches Warmly-written hero Narrative drags in the middle acts Bugs and performance issues