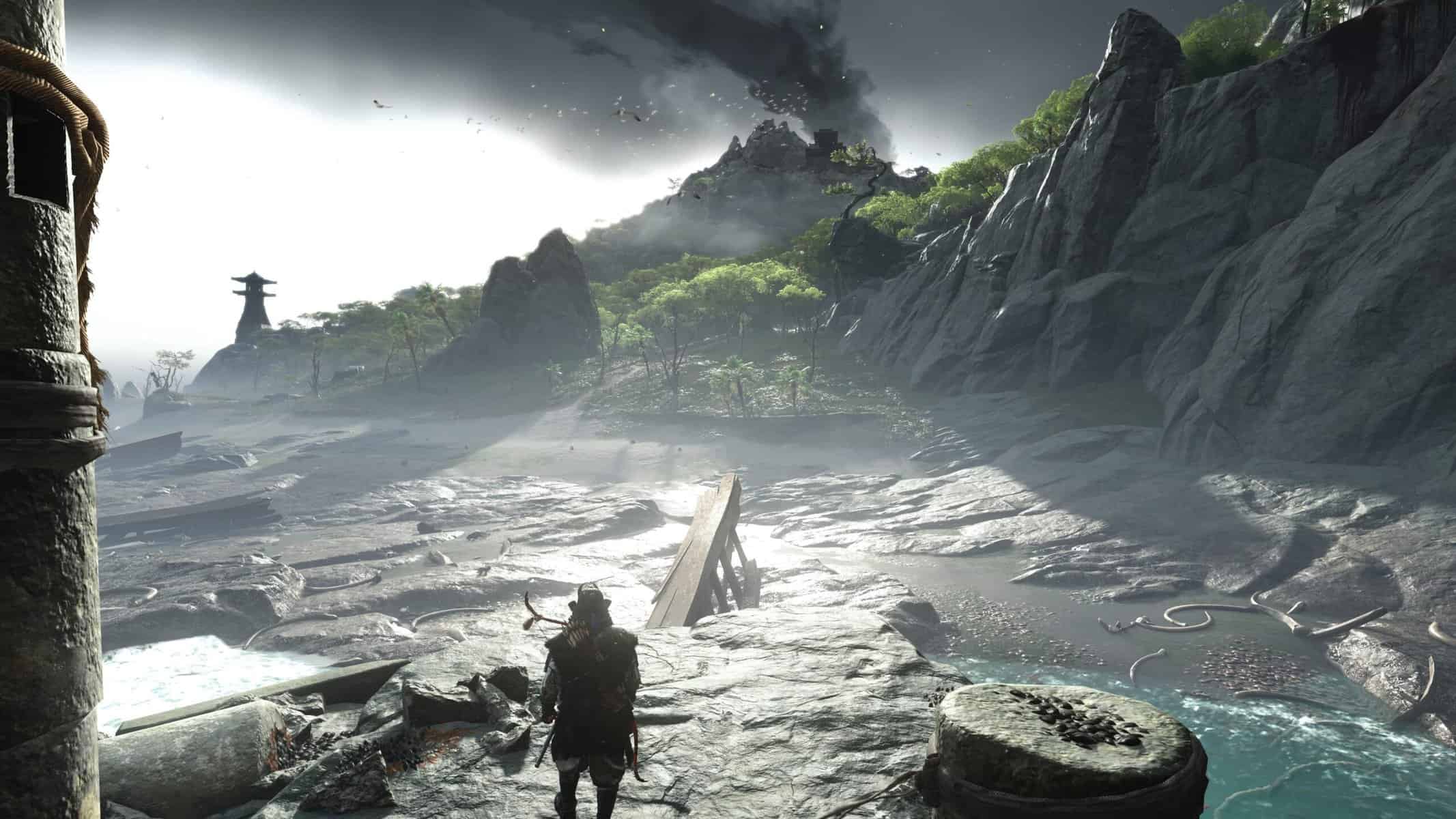 No game in which one character says to another, “Be careful. The monkeys are watching,” should go unacknowledged. This sombre warning is uttered on the chalk-white cliffs above Iki island, which lies to the southeast of Tsushima, lapped by stormy waters. You are only able to hear it in the director’s cut of Ghost of Tsushima, available now on PlayStation 4 and 5. When you do, you may wonder why on earth such essential pleasures were denied to us when the game first released, in July of last year. The answer is that the term “director’s cut” has been applied in slightly precious fashion here (as, indeed, it has for the upcoming PS5 port of Death Stranding). Though we might wish to imagine the director, Nate Fox, going ape shit at the head honchos of Sony, trying to reclaim his original, untamed vision, the reality is rather more plain.

On PS5, we get the same game as before, now in sixty frames-per-second, with a raft of new tricks crammed into the controller, and a fresh island upon which to monkey around. On top of that, all players will receive a new patch, adding a selection of features in response to community feedback, and picking a few bugs out of the game’s fur. Iki, meanwhile, is home to a band of pirates who are more than happy to offer community feedback to our returning hero, Jin Sakai. Years ago, Jin’s father—whose gurgling death we glimpsed last time round—put down a rebellion on Iki, and his questionable deeds during that savage campaign have stained the memories of the islanders, and of Jin. Consequently, no one on Iki respects samurai; in fact, the only reason they don’t kill him is that they don’t know that he is a Sakai. 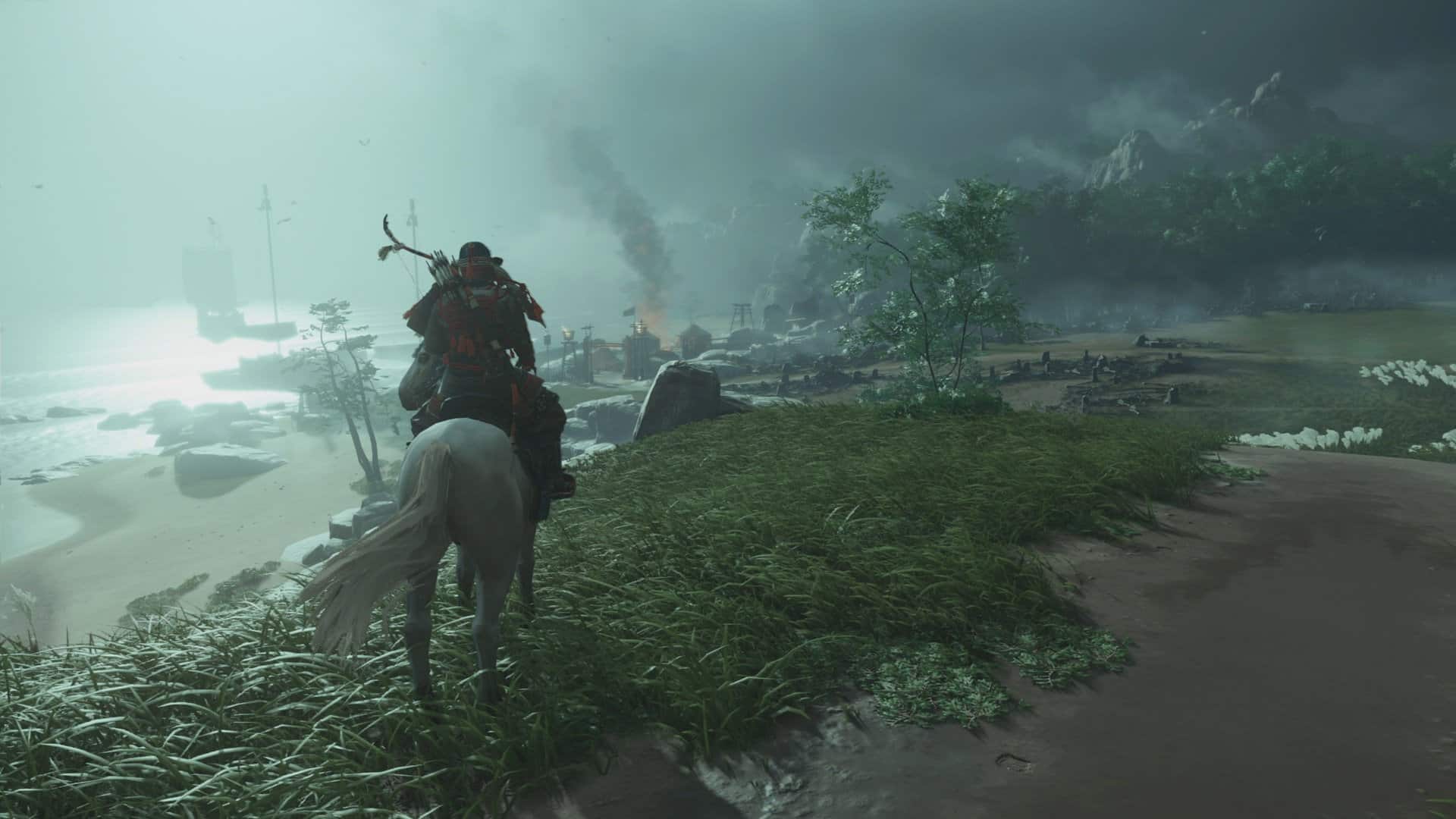 The Mongol invasion, we soon find out, has also reached these shores, in the freaky form of the Eagle: a woman with ash-grey hair and a cloudy eye, whose tactic of choice is to pour a psychotropic potion down the throats of her captives, stirring their innermost fears. I have to admit, when Jin was subjected to this, shortly after reaching Iki, I worried not for his mind but for my own. Ever since Batman: Arkham Asylum, wherein Bruce Wayne was forced to patrol the private corridors of his trauma, after being pricked by an hallucinogenic fear toxin, a strain of blockbuster games, seeking a shortcut to character development, have adopted a similar strategy—stranding their protagonists on icky islands in their own heads. What’s more, Jin’s guilt at being unable to save his father was already firmly planted in the plot, and surely any further watering would wilt the theme?

I needn’t have worried. True, we do get a few trippy sequences—where the screen ripples, like a disturbed pond, and Jin stumbles through an empurpled vision of torment. But these passages swirl happily into the flow of the story, and they recontextualise some of what we already know about Jin, and about his father. Outside of the narrative, the Eagle’s presence has some neat effects on combat, too. Her troops include foes who swap their weapons mid-clash, meaning you have to keep pace by pouncing into the corresponding stance on the fly. We also have shamans, who act like the thirteenth-century equivalent of those portable phone chargers; they hang back but stay plugged in to every battle, and they love nothing more than chanting while their comrades fight, keeping them fizzing over with stamina. 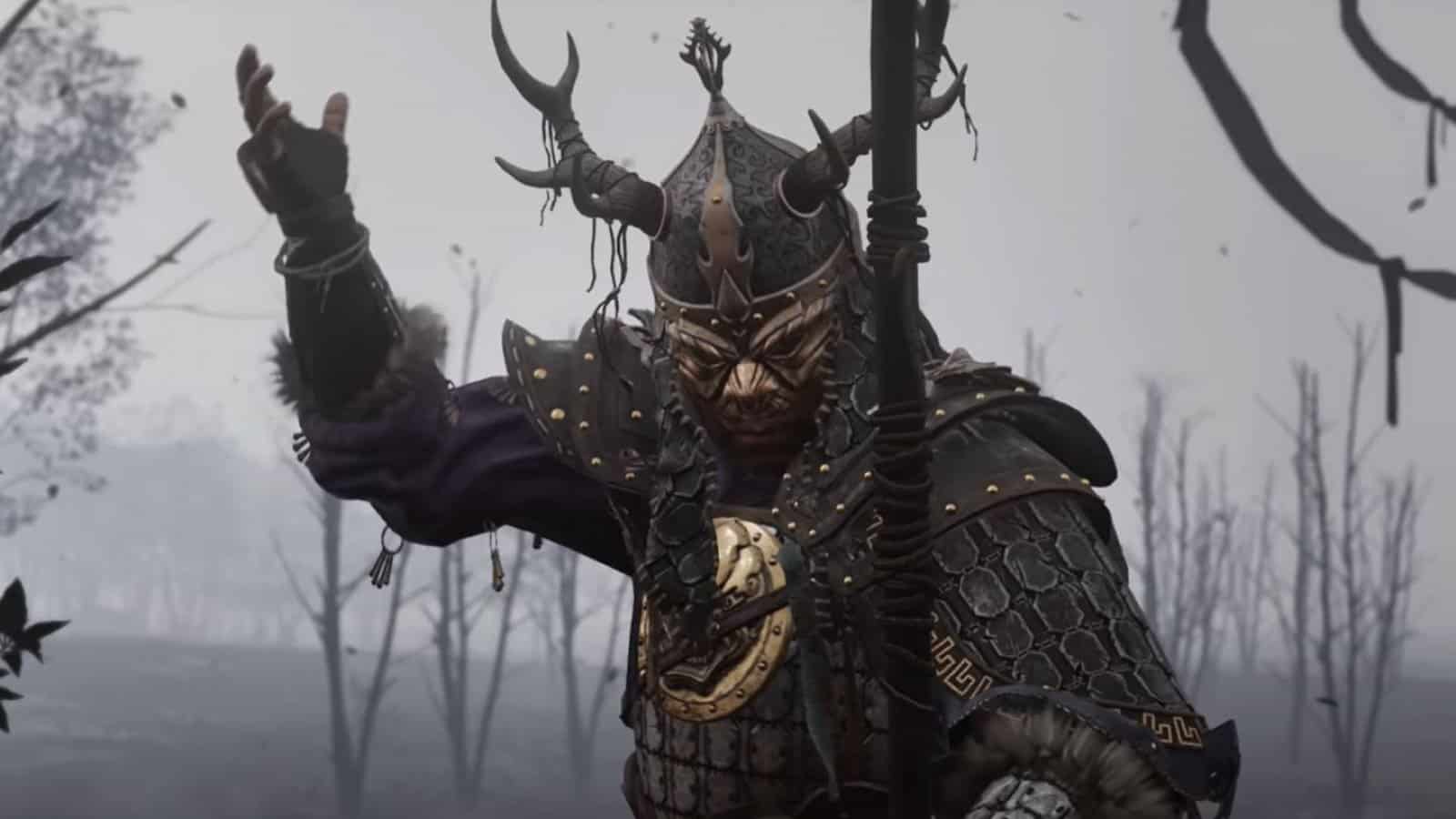 The question is, have the shamans at Sucker Punch Productions, the game’s developer, done enough chanting to stoke our stamina for more Ghost of Tsushima? Well, that depends on how tired you were of its chief thrills. Personally, a year is more than enough time to justify a return journey; my memory of the art style, doomed to dry and fade, was no match for being reacquainted with the real thing—like holding a painting up to the humming pane of a liquid-crystal display. Elsewhere, the clutch of fresh mechanics is welcome. There is now a lock-on in combat, should you desire it, as well as the option to hide the bow and quiver on Jin’s back—the better to preserve the classical look of the lone swordsman, who prefers to meet his opponent’s gaze. Furthermore, the grapple hook can now be used to wrench gates off their hinges and to pull down trees, cracking their trunks and flattening them into makeshift bridges.

The PS5 controller is put to good use in moments like this: ringing as your sword is drawn into the air, clicking lightly as you pick locks, and sending hoofbeats thundering through your hands at full gallop. Sucker Punch has always been creative with Sony gimmickry; think of Infamous: Second Son—the way that you would tip the PS4 controller vertically, mimicking a can of spray paint, and feeling slightly drippy. Here we get animal sanctuaries, giving Jin a chance to reflect on his childhood, and giving us a chance to play Flute Hero—waving the controller to hit the right notes, as they breeze toward the camera, and keep his tune from blowing off-key. 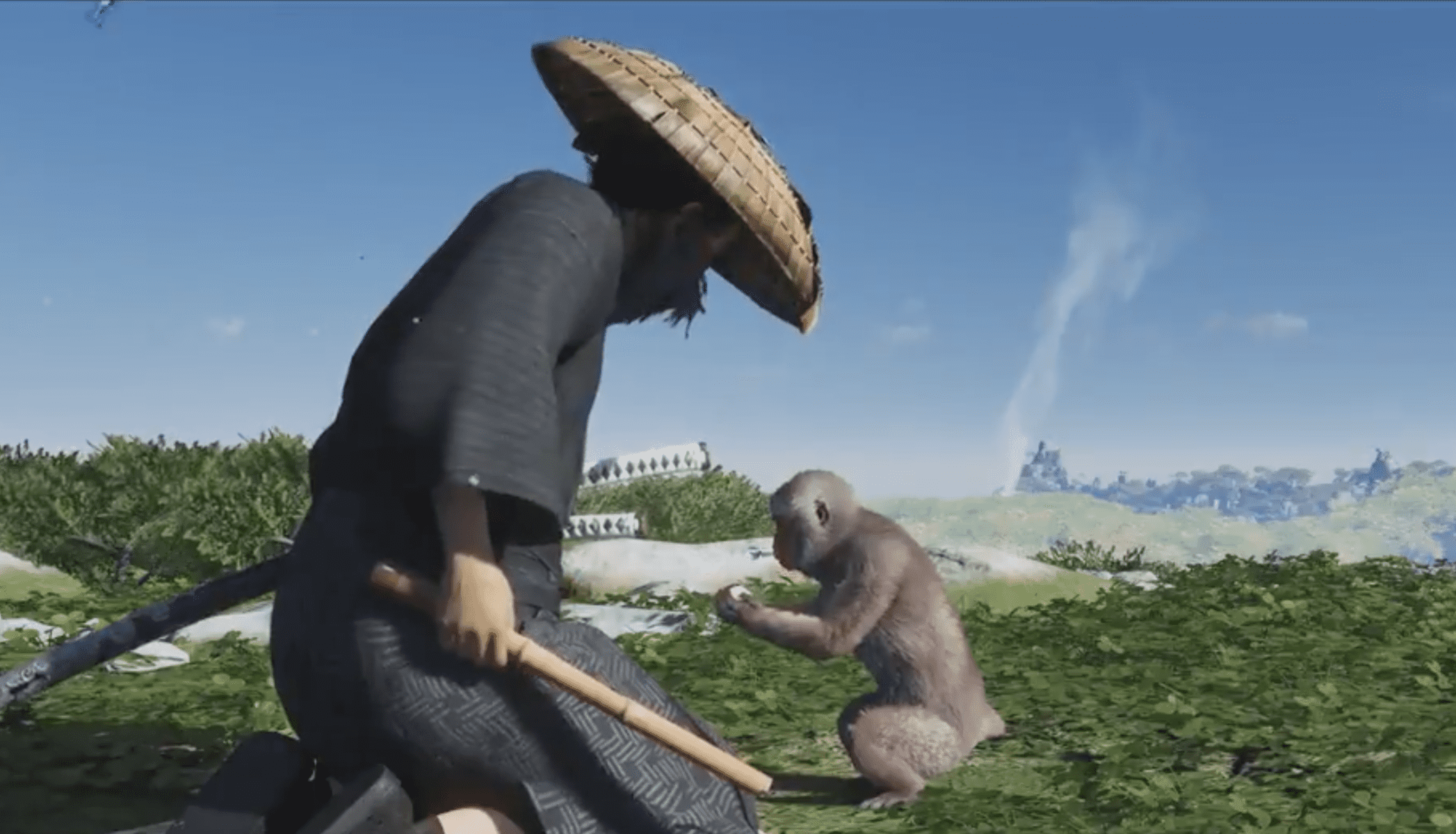 As was the case with the Spider-Man remaster, on PS5, the most freeing improvement is the cutting of load times. (Swinging on a length of web, it turns out, has nothing on being liberated from the sticky trap of a loading screen.) Being able to fast travel, in the long blink of a black fadeout, to anywhere—on Tsushima or over on Iki—is a joy. Having finished the DLC (it becomes available as you start Act II), I now plan on nipping back to the main narrative encased in fancy new armour and wielding nifty abilities. Such is the essential draw of this “director’s cut”: to replay one of the better open worlds of recent years with a handful of upgrades, bolstered by an unbreakable frame rate, with an untrodden chunk of land to explore. If you played Ghost of Tsushima a year ago, and you are wondering whether to revisit your old haunts—or if you’re balking at the price (£24.99 for the next-gen upgrade, £15.99 for the last-gen upgrade)—my advice would be to throw care to the wind. But what about those monkeys, you ask? Play it and find out.