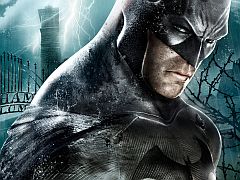 Super heroes appeal because they are usually men and women who are capable of extraordinary things. There’s an element of wishing you had those abilities, whether it be Spider-man’s tingling spider-sense, Superman’s flight or Wolverine’s regeneration, but some super heroes aren’t really so super. Batman is just your average, rich, man who’s made himself into something better, using his intellect, detective skills and the latest gadgets to give him an edge over his foes. So if he’s just an ordinary man why has it been so hard to make a successful video game about the Caped Crusader? We’ve had the odd flash in the pan down the years, but only now with Eidos and Rocksteady’s Batman: Arkham Asylum do we have a game that really does Bats justice.

If you haven’t been following Arkham Asylum over its development, the set up couldn’t be simpler: Batman is transporting arch enemy The Joker to the asylum, with the grinning one tightly secured in the back of the Batmobile. On entering the secure facility, in an opening sequence reminiscent of that seen in Starbreeze’s excellent The Chronicles of Riddick: Escape from Butcher Bay, there’s a sense of unease. Surely nothing can help The Joker get out of this one… or can it? It seems it was all a devious plan and soon enough The Joker is free, running Arkham Island with a whole load of goons doing his bidding.

As we touched on earlier, Batman isn’t a man with great strength. He can’t fire lasers from his eyes and he doesn’t have the ability to stretch; he’s a man who uses his smarts to find clues at crime scenes, uses gadgets to traverse the environment in ways normal men can’t, fights with the skill of the best martial artists and lurks in the shadows while stalking his foes. This all had to be part of Arkham Asylum in order for the game to be a true Batman experience, and it is. No game before has let you step into the shoes of Batman like this.

Combat is as good a place to start as any, with hand-to-hand brawling making up a large portion of the overall experience. Rather than overcomplicating things with a God of War or even Ninja Gaiden-style system, Rocksteady has implemented a simple control scheme that is easy to pick up but takes some time to get truly great at. It’s worth noting that while the game is entirely playable using a keyboard and mouse, the melee combat benefits immensely from using a game pad, such as the Xbox 360 controller. All other aspects of the game function perfectly with the traditional PC control setup, but fighting feels a bit more complicated. Punches and kicks are mapped to one button or key, counter attack to another, and stun to a third. Enemies come at Bats from all sides, so it’s essential to direct his attacks in combination with an attack.

Early on you’ll need little more than the main attack and the odd well-timed counter – enemies handily display a clear marker above their heads when they’re about to attack assuming you’re not playing on the hardest difficulty setting. It’s all about timing rather than button mashing, and soon you’ll settle into a rhythm and pull off some stunning moves, ending in glorious slow motion finishers. As you progress you’ll gain new moves, unlocked in the upgrades menu in exchange for points earned through general play. One key ability is the takedown, which lets the Dark Knight incapacitate fallen enemies so they don’t get back up. What matters is that it feels great, fitting snugly between the slightly too basic counter combat in Assassin’s Creed and the best examples in the hack ‘n’ slash genre.

Fisticuffs is just one aspect of combat in the game though, with a wealth of gadgets at Bats’ disposal should you want to use them. The Batarang is the first you’ll get your hands on, with the game offering a quick throw that auto targets the most significant object or enemy on screen and a manual aim. In its most basic form it’s good for temporarily knocking down enemies and cutting down objects that are out of reach, but later on you’ll be able to upgrade to get hold of Sonic Batarangs that send goons off searching for them, and multi Batarangs that allow Bats to target numerous enemies at once. Towards the end of the game you’ll have so many gadgets and weapons that you won’t always see the obvious solution to a problem even if it’s staring at you in the face. The Batclaw lets you pull down ventilation shaft grates that are just out of reach, but this is eventually upgraded to pull down weak structures, and there’s a slight variation that forms a zip rope between two solid walls – oh, and you can also use the claw to pull enemies off their feet, too.

There’s just an abundance of options. When assessing any situation, Batman’s main tool is his detective vision – an enhanced viewing mode that highlights key objects that can be interacted with, the location of enemies (even if they’re behind walls), and whether or not an enemy is carrying a weapon. By using this info you’re able to plan your attacks, whether it is a straightforward assault through the front door or a more considered series of stealthy swoops down from the rafters, dispatching foes one at a time. A favourite technique of ours is to swoop down and knock out an enemy, spray some explosive gel on his location, retreat to cover, wait for his buddies to investigate and then blow the gel. It’s sneaky, but it gets the job done.

For the most part stealth is handled really well, but from time to time evading enemies can cause a few problems. Batman isn’t able to jump at all times, with a single button/key having different uses depending on the position he’s in and what he’s next to. If he’s stood in front of a platform he’ll climb it, if he’s on the ground he’ll roll and if he’s in the air holding it down will spread his wings and let him glide. Issues crop up when you’re desperately trying to run from gun-carrying enemies (a few shots and it’s an early bed time for Batman) and you need to hop over obstacles – unless you time it well he’ll just roll into the wall, and it’s very easy to get caught in a frustrating loop of almost-guaranteed death.

Enemy variety is excellent, with the standard goons coming in a spread of forms (standard goon, club-carrying goon, knife-carrying goon, electric-prod-carrying goon and gun-carrying goon), and you’ll need to use different tactics on each if you’re going to fuel your combo meter and take them down without being hit. It’s the numerous bosses that really steal the show, though. Rocksteady gives you time to get to know each of your main foes before having a final confrontation, with some having lengthy periods of build up spread across numerous rooms. You’re rarely just thrown into a fight without any prior encounters, making the showdowns far more entertaining. The majority of villains are completely outshone by The Joker, but that’s not to say they’re bad – he’s just one of the best video game characters we’ve seen in some time.

Boss fights themselves aren’t hugely original, but they do make sense for each enemy, and you’ll often need to use their strengths against them in some way. Scarecrow is also worthy of a special mention, although his sections are split between some utterly superb altered-reality scenarios and some dated and less-than-thrilling “don’t get caught by the spotlight” gameplay. When you’re playing through areas as Batman high on Scarecrow’s gas you’ll likely be surprised by what Rocksteady has thought up. At times it’s scary, unsettling and upsetting, but then you’re transported to another world in which you need to play through the basic stealth sections that are more or less repeated throughout the game.

Using the Unreal Engine 3, Rocksteady has created a stunning looking game. Arkham Island is incredible to walk around, the characters are highly detailed and emotive, and it all runs without any noticeable slowdown. Few games manage to seamlessly switch between fast-flowing combat and considered sleuthing, but Rocksteady has been able to do it here with aplomb. If there’s a criticism of the presentation, and we’re really being picky here, it’s that some of the world feels a bit lifeless, without many objects that can be physically interacted with. This has been lessened somewhat in the PC version, thanks to some neat PhysX support that introduces moving smoke/fog, swaying sheets of plastic and broken tiles that fly about when large enemies smash into them. It doesn’t add a great deal to the game as a whole, but PC gamers with the right hardware will appreciate the effort that’s gone into the game, on top of the expected better textures and increased resolution the game allows for.

No doubt we’ll be on the end of some hate here, but the acting is also a bit varied. While all the villains are top class, headed by Mark Hamill as The Joker, Batman suffers from some wooden delivery and iffy lines. The musical score can’t be faulted though, setting the mood and never feeling out of place.

It’s a shame that the game has to end, but when it does you’ll no doubt have more to see and do. For one, there are a tonne of collectable items to find that will keep you exploring for ages, with Riddler trophies, inmate interviews and more to be found. There’s also a set of challenges that test your combat and stealth skills, with scores registered on worldwide leaderboards for all to see and compete against. While not as engaging as the campaign, for many these challenge rooms will offer the same amount of play time, if not more, and Eidos has already released a free add-on pack.

Batman: Arkham Asylum is everything you’d want from a Batman video game. It takes the licence and uses it in ways that make sense both for the character and for a game, giving players the chance to become one of the most popular super heroes of all time. There are a few niggling issues, but nothing that gets in the way of what is undoubtedly one of the best games of 2009. Whether you fancy skulking in the shadows, smashing slow motion fists in into a goon’s skull, or simply using some cool gadgets, you can do no wrong with what is Eidos’ best game in years.

Whether you fancy skulking in the shadows, smashing slow motion fists in into a goon's skull, or simply using some cool gadgets, you can do no wrong with what is Eidos' best game in years.
9 Great mix of gameplay styles Loads to collect Superb presentation Not being able to jump causes problems