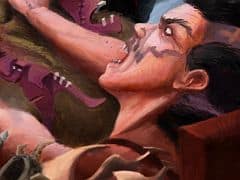 I’ve never taken hallucinogenic drugs, but I’d imagine the results of doing so would be largely similar to playing Zeno Clash. ACE Team’s first-person brawler is delirious combination of bizarre character models, unpronounceable names and a narrative that was (probably) conjured up during an intense drug induced trip. And yet at the same time, the game world is incredibly cohesive, delivering an outlandish story that works as the perfect complement. Few games nail such a unique atmosphere, and Zeno Clash’s is one of the most unique I’ve had the pleasure of experiencing.

If you recognise the name, it’s probably because Zeno Clash was first released on Steam last year. Since then, the game has arrived on PC in a more tangible DVD form, and now on XBLA with the improved and tantalisingly named Zeno Clash: Ultimate Edition. Although it’s based on Valve’s Source engine, and does feature the odd ranged weapon, the game is predominately melee based, and will have you up close and personal with the oddball inhabitants of the deranged world.

Explaining the narrative without sounding mentally unhinged is a challenge for the best of writers, but I’ll certainly give it a stab. In the world of Zenozoik, a young man known as Ghat is run out of his hometown after killing his hermaphroditic parent. Father-Mother – as the creepy, bird-like creature is known – had many other children, who have taken it upon themselves to find and kill their murderous sibling. Quite why Ghat decided to kill his parent is shrouded in secrecy, but a surreal trip through the vivid wilderness of Zenozoik eventually reveals (nearly) all.

It plays out like a childhood nightmare, not the horrific Freddy Kruger type stuff, but the fantastical, nonsensical kind. It might not have you waking up screaming in the middle of the night, but it does leave you with an uneasy feeling for the rest of the day. Thankfully, Ghat knows how to look after himself, and with his female companion Daedra at his side, the dangers of the Zenozoik outback don’t seem so daunting. Still, the violent wildlife, hunters, assassins and psychotic loons out for his blood still put up a good challenge, and ultimately you’ll be relying on his fists to stop them.

The combat system takes a little while to become acquainted with, not due to any short comings in its execution, but because brawling in the first-person is such a seldom used mechanic. Normal punches are mapped to the right-trigger, whilst more powerful blows are on the left. Combine combos constructed from these with grabs, blocks, dodges, counters and a wide range of blunt weaponry, and you have a fairly in depth combat system on your hands. There are long range weapons too, but more often than not you’ll be pummelling some dreadful creature’s face in with nothing more than your blood stained hands.

Things start to get more difficult when taking on multiple enemies, who will take advantage of the fact you can’t see behind you at every opportunity. Learning how to separate enemies and stay out of harm’s way in the midst of a three-way brawl is a skill you’ll quickly need to pick up. A quick tap of the Y button can be used to lock onto an enemy, but frustratingly, this is the same button used to pick up items and weapons. With a camera that snaps to the nearest enemy every time you try to pick up a dropped weapon or vital healing item, I found my patience was quickly tested. Bar this and a few issues I had with aiming ranged weapons, I was surprised at how robust the combat system was given the first-person perspective.

On the whole, combat is perfectly satisfying, but where the game really shines is in the world that ACE Team has brought to life. The unearthly environments are organic and primitive, designed with a ‘punk fantasy’ theme in mind. It reminded me of Oddworld, in a sense, but others may argue differently. The characters that inhabit this world are the real stars of the game, however, ranging in their deviation from the human form. Feathers, horns, trunks and tusks all blend to create bipedal hybrids that are genuinely unnerving. I like to think they’re the kind of characters Guillermo del Toro would have designed if he ever ventured into game design.

It’s not just the creatures’ outward appearances that prompt raised eyebrows – but their deranged perspectives on life too. In the wilderness, Ghat comes across psychotic savages known as Corwids of the Free, who are driven by strange instincts and rituals. Ghat explains that these beings are ‘not slaves of reality’ and thus their lunacy is justified. One, for example, is obsessed with walking as far as possible in a straight line, while another removes the eyes from all he encounters so that he is ‘invisible’ to them. Another still, known as Erminia, urinated on her own body before intentionally starving herself to death.

At times, the brash madness of it all can be quite scary, not in the haunting way that say Alan Wake is, but in a disturbing, uncomfortable Silent Hill kind of way. It’s the way the characters stare at you with their wild eyes, or the harsh tones of their voices. Father-Mother, the evil hermaphrodite at the heart of the story is particularly unnerving; a character whose harrowing image I’ve been struggling to keep out of my thoughts. But, the fact a game can get under your skin so effectively deserves nothing but praise. I honestly revelled in the abnormality of it all. A review of the original PC version (quoted on the box-art, no less) mentioned how the game stays with you long after you’ve played it, and I wholeheartedly agree.

Being the ‘Ultimate Edition’, the revamped Zeno Clash comes with a bevy of fixes and improvements. The graphics have been spruced up, some of the more monotonous voice acting has been re-worked, and some new weapons have even found their way into the game. You also get Tower challenges, which allow two players to team up co-operatively for a series of increasingly difficult, floor-based stages. This can be done both split-screen, and over LIVE, but either way it felt too detached from the concept of the main game for me to really enjoy.

Zeno Clash is incredibly hard to explain; it’s so off-the-wall that it demands to be experienced first-hand. For a very reasonable 1200 points, it will whisk you away to a land that pushes the boundaries of bizarre. If you decide to drop the cash on it, don’t be put off by the intense obscurity of it all; embrace it – as this is exactly what defines the game, and what you’ll remember about it years down the line.

For a very reasonable 1200 points, Zeno Clash will whisk you away to a land that pushes the boundaries of bizarre. It's so off-the-wall that it demands to be experienced first-hand.
8 Well delivered first-person brawling Incredibly unique setting and atmosphere Control layout could be better Tower challenges feel detached

The game is set in the fictional fantasy world of Zenozoik, and…

The game is set in the fictional fantasy world of Zenozoik, and…