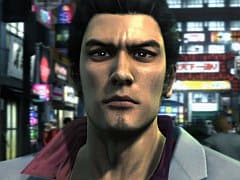 The Far East has an undeniably huge influence on video game design; from quirky role-playing experiences such as Shin Megami Tensei and Disgaea, to huge, million-selling franchises such as Final Fantasy and Pokémon. No other country has such profound ties to our beloved industry as Japan. As a setting itself however, Japan is a fairly under represented location in games, with but a handful of titles set in a virtual land of the rising sun. The Yakuza series is perhaps the most notable of those titles, and the third instalment offers the most faithful representation yet. And for that, we must say ‘Arigato’ to SEGA for bringing it to European shores.

Yakuza 3 welcomes back Kazuma Kiryu, an ex-Yakuza who has escaped the criminal underworld of Tokyo to run an orphanage in the tropics of Okinawa. The drastic career change is reflected in the picturesque location and opening few hours of gameplay, both of which are far calmer than the turbulent transactions of Tokyo’s Yakuza scene. Sunshine Orphanage comes with a few problems of its own, however, including school bullies, stolen pocket money and playground romances. While at first the kiddie emotional guff seems unnecessary, I found myself becoming increasingly attached to the eclectic mix of orphans, who give the story that unfolds a real backbone.

The comparatively pleasant melodrama of Kazuma’s new life doesn’t last long. An eviction notice threatens to put the orphanage out of business, but Kazuma – an orphan himself – refuses to let that happen. After looking into the eviction, he discovers the politics behind it lead back to Tokyo, and the Yakuza, forcing him back into the life he thought he’d left behind. Ditching the Hawaiian shirt in favour of his trademark suit and crocodile-skin shoes, Kazuma embarks on a quest that returns to the very roots of his sordid past.

The narrative is built on a solid foundation laid by the first two games, with a cast of returning characters and recurring themes. Thankfully, SEGA realised that some prior knowledge was required to enjoy the game properly, and have been kind enough to furnish the main menu with cutscenes from the original two games. These can also be viewed from safe-houses throughout the game, meaning there’s always an opportunity to clear up any confusion. Newcomers to the series shouldn’t be put off by jumping in at number 3; even without watching the recaps, the game isn’t particularly hard to follow, and remains enjoyable through well orchestrated cutscenes and engaging characters.

For those unfamiliar with the formula, Yakuza 3 is an action RPG in a very similar vein to the critically acclaimed Shenmue series. Players wander around a fictional area of Tokyo known as Kamurocho, finding (and often beating the stuffing out of) the relevant people to advance the plot. Along the way, street punks, gang lords and the Yakuza themselves will try and put a stop to your efforts, interrupting your business without a moment’s notice. These are much like the random battles found in more conventional JRPGs; everything stops, an excitable crowd appears out of thin air and the control scheme switches to that of one more suited to battle.

The combat system itself takes the form of a traditional brawler, particularly reminiscent of the aforementioned Shenmue. Hammering the Square button will launch a flurry of punches with a kick thrown in at the end for good measure. Throwing a Triangle button into the mix will include heavy attacks, giving some variety to combos. A Heat gauge at the top of the screen gradually builds as you fight, allowing for more powerful environment sensitive moves. These, more often than not, simply involve slamming a head into a wall, although there are a variety of more interesting (and brutal) moves depending on the location. Boss battles are particularly entertaining, primarily because the characters involved are unable to fight without first removing their shirts. These half-naked confrontations give rise to merciless finishing moves that prove just why the game deserves an 18-rating.

With Yakuza 3, a much greater emphasis has been placed on items, and enemies can be dispatched with a plethora of interesting weaponry. Katanas, knives and baseball bats can be easily mapped to the d-pad where they can be brought into battle at the tap of a button. They don’t last long, however, and after a few swings will break, rendering them useless. Degrading weapons have always been a pet hate of mine; how can a steel baseball bat possibly break after bashing a few heads in? In an otherwise realistic game, this mechanic sticks out like a sore thumb, or perhaps more appropriately, a broken nose. Still, it gives the game’s weapon vendors a purpose, who can repair and upgrade weapons in exchange for a few Yen.

The role-playing mechanics don’t stop there; Kazuma has a range of attributes that can be improved with experience earned from battle and side-quests. By allocating points to the Soul, Tech, Body and Essence disciplines, Kazuma becomes a far more worthy adversary in combat, with improved statistics and all-new moves. By the end of the game, there’s a huge list of moves at your disposal, giving numerous options to combat.

It’s not all about violence and bloodshed though, and if the stresses of Yakuza life start getting you down, there are a wealth of subplots and mini-games to take your mind off things. Golf is a particularly effective way to let off some steam, offering a surprising level of depth for a mere mini-game. There’s also baseball, darts, fishing and even an arcade with working cabinets of retro SEGA titles. Literally hours can be sunk into these seemingly pointless pastimes, but they give the game a rich and full quality to it.

Another way Kazuma likes to unwind is by blogging. Yes, you read that correctly. Armed with his trusty mobile phone, Kazuma can take photos of certain events in the game. Timing the shots well enough will lead Kazuma to an epiphany, which he will proceed to blog about using his phone. This in turn leads to new skills and abilities which can be used in combat. Blogging has some benefits after all, it would seem.

There’s never a shortage of things to see and do in Yakuza 3, and everything is tied into the game world so convincingly. This, in fact, is the game’s greatest achievement; its living, breathing and totally believable environments. For otakus and fans of Japanese culture, wandering around the gorgeous locations of Yakuza 3 is a real treat. It’s all in the details; the vending machines, bicycles, toy machines, arcades, neon lights, the general bustle of city life. The Japanese voice-track adds to the authenticity too, giving rise to believable characters and a realistic hubbub of background noise. I’ve never been to Japan, but after playing Yakuza 3, I can honestly say that I feel like I have.

Games with a scope as large as Yakuza 3 seem to be burdened with a few inevitable flaws however. Invisible walls rear their ugly head with alarming frequency; how these still find their way into modern game design is beyond comprehension. Navigation is problematic too, with whimsical destination markers that are never there when you need them. All too often you’ll find yourself ambling around without the foggiest idea where you are, or where you’re heading.

These flaws only really stand out due to the quality of the game as a whole however; Yakuza 3 is still a remarkable achievement. Kamurocho might be a fictional location, but it’s quite possibly the most well realised city in video game history. Yakuza 3 combines visual splendour with superb sound design to create an unparalleled atmosphere. Although the dated combat might take a back seat to these environments, Yakuza’s first outing on the PlayStation 3 feels suitably next generation. While the first two titles in the series were both overlooked and underrated, Yakuza 3 demands to be taken notice of. This isn’t only the best game in the series, but possibly the genre as a whole.