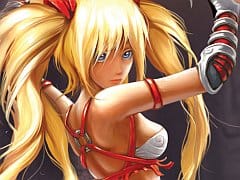 We can’t have been the only ones to have concerns about Southpeak’s X-Blades. The central focus has always appeared to be the main female character’s lack of clothing. Perhaps it’s just us being cynical, but there’s always been a big question mark over the actual gameplay and presentation. Having finally got our hands on the retail game, X-Blades is actually a more competent hack ‘n’ slash than we expected, but is let down by some extreme repetition and less than spectacular visuals.

After an epic struggle between the two rulers of the world (the Enlightened and the Dark One), the Enlightened managed to put an end to the war by imprisoning the power of the Dark One inside an artefact, but in doing so lost his own power. This created two artefacts that were hidden inside a huge temple, a temple that action heroine Ayumi travels to. It’s not the most enthralling storyline you’re likely to find, but sets up the action that’s to come.

Despite an illusion that you’re on this grand adventure, searching for these artefacts, X-Blades is essentially an arena-based brawler, similar in a way to Sony’s Heavenly Sword. Ayumi will enter a new level, take a few steps, all exits will be sealed shut with a strange red mist and enemies will swarm on you. A life bar pops up in the corner of the screen and you can’t leave until you’ve completely depleted that bar. In some cases this corresponds to simply killing all the enemies, but in others a big boss creature stands in your way.

The core combat is split between Ayumi’s melee attack with her blades and ranged combat, again with her blades. Yes, the aptly named Pistol Blades are more or less the Swiss army knife of the hack ‘n’ slash world, functioning as death dealing blades and rapid shooting guns. Over the course of the game you’ll find pieces of artefacts which combine to upgrade your basic moves (adding combos and the like), and various magical abilities can enhance your basic attacks, but the game still feels very much like you’re simply repeatedly hammering on mostly one button.

To say things become repetitive is perhaps one of the biggest understatements of the year so far. Early on you simply stand in the middle of a group of enemies, bash the attack button and repeat that until everything is dead. Defeated enemies and smashed objects release collectable souls, which can be used to buy new magic abilities, each with specific attributes such as fire, ice, light or dark. The twist is that enemies often have weaknesses that you’ll need to make the most of in order to take them down – something that adds to the tedium as you progress.

You might come across a fire-based creature that is particularly vulnerable to ice attacks, or a dark monster that will succumb to the power of light magic, but even when using what seems to be the most suited attack it often takes an age to take these enemies down. One boss fairly early on was supposedly vulnerable to attacks from Ayumi’s blades, something that didn’t appear to be the case a good 20 minutes later when it finally bit the dust.

A fairly clumsy inventory management system doesn’t help matters. You can map up to four magic abilities to controller buttons, but things like health and rage replenishment (what you need in order to perform magic) have to be activated inside the pause menu. It’s incredibly fiddly and gets in the way of an otherwise quite frenetic action game that always moves at a breakneck pace.

At times X-Blades looks quite decent, especially on the Xbox 360 where the frame rate holds a little more steady than it does on PS3, with plenty of enemies on screen and some pretty nifty lighting effects, but at other times it’s really quite average. The levels tend to share a certain visual style, with one blending into another as you move through the game, and the enemies move like drones rather than having any sense of individuality. It’s a shame that the more cel-shaded presentation seen during cutscenes wasn’t more successfully reproduced by the in-game graphics.

Despite a lead character that isn’t the most likeable we’ve come across and some pretty repetitive gameplay, X-Blades still manages to be decent fun. This isn’t enough to elevate it to must own status though, especially with plenty of better alternatives available on each platform. By no means a terrible effort, but X-Blades has too many problems to ignore.

By no means a terrible effort, but X-Blades has too many problems to ignore, especially with plenty of better alternatives available on each platform.
6 Lots of enemies on screen Combat is quite fluid Far too repetitive No sense of adventure

Hack ‘n’ slash from the developer of RPG Two Worlds.

Hack ‘n’ slash from the developer of RPG Two Worlds.