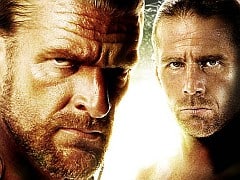 Earlier in the year a fellow video game journalist remarked to me that the WWE SmackDown vs. Raw series was its own genre. It’s not a fighting game series, like Street Fighter or Tekken, and it’s not a sports game series, like FIFA or PES. Indeed SDvR cannot be compared to any other title on the market, so unique is its gameplay. Well, that may have been the case in years gone by, but this year things are different.

And that’s because Midway offered THQ its first competition in years with TNA Impact!, released in September to a solid 7/10 review score. So, with Kurt Angle’s trash talking still ringing in our ears, has SDvR’s Japanese developer Yuke’s met the challenge?

This year Yuke’s has clearly concentrated its efforts on piling on the features rather than revolutionising the game engine. Even if you’re a seasoned SDvR fan, the sheer number of features and gameplay options are guaranteed to impress. All the create modes return, online support is once again robust and the career mode makes an appearance, although it’s still very basic. There’s over 60 wrestlers to choose from, including well known superstars from across the three main WWE brands, SmackDown, Raw and ECW. So you’ve got everyone from the well-known (Orton, Triple H), to the less well known (Elija Burke, Paul London), and some more in between, including a healthy dose of Divas (the ridiculously named Kelly Kelly is a personal favourite) and plenty of unlockables, but there are no Legends – an omission which is sure to disappoint and even anger some fans (THQ is saving them for the upcoming WWE Legends of WrestleMania game).

There are a whopping 70 match types, including the new and very silly Inferno match, where the edge of the ring is on fire and you need to burn your opponent into oblivion via a simple mini-game. There’s an easy to use but largely restrictive Create-A-Finisher mode, which allows you to import your own finishing moves into existing superstars’ move lists or into your created wrestler. There’s a cool Highlights Reel feature, which allows you to save clips from matches as they happen, then edit them together with added effects (EA and Konami take note – this would be a great feature for FIFA and PES). You can now edit the roster, changing what brands wrestlers are signed to and messing with established tag teams. Speaking of tag teams, it’s largely the same as before except for a few new illegal man moves, including a forced tag, referee distraction, an apron grapple, a pull down manoeuvre and a climb the turn-buckle move. The headline new feature here though is the overpowered new Hot Tag special move, which, once you’ve built up your momentum meter by holding up or down on the d-pad, sends you steaming into the ring clearing out everyone and their dog with quick time event-fuelled punches. This pretty much guarantees a win and, although it can only be used once, it’s too easy to build momentum and feels like a cheap one hit kill with no counter.

Best of all the new features, however, is the Road to Wrestlemania story mode, which provides a surprising amount of fun despite not actually giving you full control over the story. Here, you pick from seven superstars – Triple H, CM Punk, Undertaker, Cena, Chris Jericho and the Batista Rey Mysterio tag team – and battle your way through a number of matches on the 79 day road to… you guessed it, Wrestlemania. The good thing is that each superstar has his own original storyline, with original cut scenes and voice over work that do a great job of recreating the camp, ‘it’s behind you!’ pantomime nature of the TV show.

Every now and again you’ll get a voice message on your mobile or a note that adds some spice to the testosterone-heavy mix. As Batista I received a trash talking voicemail from The Miz after I’d beat him to a pulp in a previous match. Later, Rey left me a note giving me the optional goal of making sure John Morrison got a beating during a tag team match – payback for a chairshot Rey took a few weeks back. Complete optional goals like this and you unlock new characters and arenas to fight in.

Each storyline will take a couple of hours to work through, depending on the difficulty level you’re playing on, so times that by six and you’ve got a decent dose of story action to work through. Some fans will be disappointed that only seven superstars are included, but hopefully THQ will release new stories via downloadable content post release.

Beyond these added features it’s pretty much as you were, which is SDvR09’s biggest problem. The game engine has been left largely untouched, and fans will notice only a few tweaks. Signature moves and finishers are now triggered by a simple press of the Triangle button (on the PS3, the version tested), and there’s a new defensive manoeuvre – L2 and R2 – which allows you to roll away when attacked as you get up, but movement is still controlled by the left thumbstick and quick grapples, strong grapples and ultimate control grapples are still triggered by combining R1 with the right thumbstick.

While we’re sure many fans of the series will be delighted that Yuke’s hasn’t revolutionised the WWE game engine, we were hoping for more. It still feels clunky to play, with often bemusing collision detection and laughable clipping. Yes the wrestler models look fantastic, with almost photo realistic faces and brilliantly detailed skin, but when you trigger a Hot Tag and the game forces your partner to crawl along the canvas in a desperate attempt to reach out and touch your outstretched fingers, despite him not being in any trouble whatsoever and standing right next to you mere seconds earlier, it shatters the illusion that you’re watching a realistic virtual representation of the TV show. The crowd isn’t up to much either, with rehashed figures jumping about like headless chickens just like they did in the last game. You can’t escape the feeling when playing a bog standard match, which is going to form around 90 per cent of your time with the game, that it’s a tad archaic. I applaud the new features, but it’s probably time for an engine reboot.

So, we return to the challenge Kurt Angle and TNA Impact! posed at the top of the review. SDvR09 is better than last year’s effort, no question, and it’s a better game than TNA Impact! on account of it being yet another iteration of a tried and trusted game engine and packed full to bursting with features old and new. So yes, on the whole it has met the challenge. In a way, however, the true test is yet to come. Next year Midway’s TNA Impact! follow-up will have had a solid debut under its belt, and, hopefully, will pile even more pressure onto THQ. Fingers crossed Yuke’s not only copes with it, but revels in it.

SDvR09 is better than last year's effort, no question, on account of it being yet another iteration of a tried and trusted game engine and packed full to bursting with features old and new.
8 Road to Wrestlemania mode is great fun Packed full of features and game modes Graphics are inconsistent More of the same

The series returns with new co-op storylines and DLC.

The series returns with new co-op storylines and DLC.