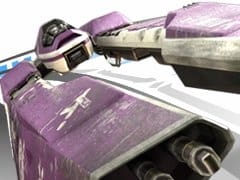 We can’t help but get excited about a new WipEout. We know the series had a troubled time on PS2, but recent PSP games have been brilliant and zooming around futuristic tracks in super high-tech racing craft takes us right back to the beginnings of the PlayStation – one of the most exciting times to be a gamer. So, the first WipEout on PS3 understandably has us and many others rather hot under the collar. The question here is whether or not WipEout HD’s fancy new graphics and repackaged tracks are enough to satisfy until we get a proper sequel.

Let’s start off by pointing out that WipEout HD costs £12. That might seem a tad expensive compared to many downloadable titles, but compared to a full-price retail release it’s incredibly good value. If the cost still seems too high then know that this isn’t you’re average downloadable game and it shares almost none of the trademark signs that you’re playing a game developed on the relative cheap. WipEout HD features incredibly slick 1080p visuals, a brilliant soundtrack, online multiplayer support for up to eight players (our online games proved to be nicely lag free), two-player split-screen, numerous game modes and eight tracks. That £12 is starting to look like quite a bargain.

It’s easy to get carried away with WipEout HD. We’ve gone through a period of gaming where you can pay upwards of £40 for games that last less than seven hours, so when we’re given a good deal we take notice. Things aren’t quite as amazing as they seem though. WipEout HD is effectively a compilation of the best tracks from PSP WipEouts Pure and Pulse, and also some of the innovations, such as the mag strips that stick your vehicle to the track as it hurtles around gravity defying tracks.

If you missed the PSP games this won’t matter one bit, especially as some of the tracks in Pure and Pulse rank among the best the series has offered, but anyone overly familiar with those games might feel short changed. From Pure WipEout HD includes Chenghou Project, Sol 2, Vineta K, Sebenco Climb, Anulpha Pass (from the “Delta” expansion pack) and Ubermall (from the “Gamma” expansion pack). That leaves Moa Therma and Metropia from Pulse. These are also available in reverse and in Zone mode.

Zone mode is pretty much one of the best things that’s happened to racing games in years. It actually originated in WipEout Fusion but it’s so much cooler here than it was then. It’s really nothing more than you piloting a craft around a track with its top speed increasing as you move through the zones (speed levels). Key to making it so brilliant in HD is the incredible presentation. Although the tracks you race on are those you’ll have already seen, they’re completely stripped of textures. What you get is a track painted almost entirely in one colour, with a different coloured wave that whooshes in from behind you and changes the colour once again. Combine this with displays around the track that move to the beat of the music and you have an audio visual experience like no other on the PS3.

Other events, like standard races, GP events and fastest lap challenges seem rather sedate in comparison, mainly because they are. It’s not until you’ve moved through the classes that standard events have the same adrenaline fuelled excitement of Zone mode events. For newcomers this is probably a good thing, as the speed encountered later on verges on unplayable. WipEout has always been about racing faster than your reactions are able to cope with and HD is no exception.

Structurally things play out much as they did in Pulse, with a grid system housing numerous events, with a set number of points needed before you can move on to the next grid. On the track things are very similar too, even down to some of the special moves you can perform, such as the barrel roll in mid-air, and the weapons you pick up – yes, old favourites like the shield, mines, turbo and auto pilot are back. You can even absorb a pick-up in order to replenish your craft’s health as you could in the PSP WipEouts. As we said, HD is a collection of previous PSP games rolled into one, and the same is true of how it plays.

That’s not a slight on the game, seeing as both Pure and Pulse play exceptionally well, but just a warning to not expect anything new. Something the PSP games didn’t have is motion control – play in bonnet cam for best effect – but this is something for hardcore only. We tried to master the nuances of tilting the Sixaxis but it just isn’t for us. We’ve heard reports of it actually allowing for incredibly smooth cornering, so it’s certainly worth a go if you’ve got the patience.

For what is essentially a budget release Sony Liverpool hasn’t skimped on extras. WipEout HD includes some superbly integrated custom soundtrack support, trophies and optional DLC in the future (the PSP games received tons of support post release). It really is an excellent package. It’s also worth noting how great it is to see a game running at 1080p. Although we’ve seen these tracks before seeing them in such sharp detail is a sight to behold and shames many full price releases.

At £12 you’ve probably already made your mind up about WipEout HD, but in case you’re on the fence we whole heartedly recommend you download it as soon as it hits the PlayStation Store. This isn’t really WipEout’s PS3 debut, being a collection of things we’ve seen before, but as a teaser to what is surely to come it’s a highly polished and tremendously exciting game. If Sony keeps churning out PSN games like this they’ll put the retail industry out of business.

At £12 you've probably already made your mind up about WipEout HD, but in case you're on the fence we whole heartedly recommend you download it as soon as it hits the PlayStation Store.
9 Incredible HD visuals Great sense of speed Bargain price Nothing really new here

Wipeout comes hurtling onto the PS3 in glorious high definition.

Wipeout comes hurtling onto the PS3 in glorious high definition.