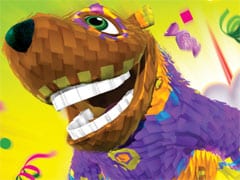 The Xbox 360 can’t be called the system of choice for younger gamers, but Microsoft certainly looks to have a winner on its hands with the Viva Piñata franchise. The garden management title that launched the cutesy piñata animals onto Xbox 360 perhaps wasn’t best suited for the audience the 4Kids cartoon attracts, but the latest candy-filled offering is certainly better placed for success.

From the moment the game loads players will be bombarded with over-the-top happiness. The franchise’s theme tune plays with a host of loveable piñatas from Piñata Island on hand to brighten up your day. It’s perfect for getting players into the party mood and even the most hardened of gamers would be hard pressed not to raise a smile.

Set inside an episode of the animated series, players take control of their favourite Piñata character – eight in total including Franklin Fizzlybear, Hudson Horstachio, Paulie Pretztail, Fergy Fudgehog, plus two all-new characters Hailey Horstachio and Petunia Pretztail. You’ll be competing against three other Piñatas for fame and fortune in the Party Animals Championship Challenge, a massively popular TV show for inhabitants of Piñata Island.

What follows is a series of race and mini-game challenge events, each dishing out points to the contestants depending on how well they perform. You can choose to play a short, medium or long game, against up to three further player-controlled opponents – either split-screen or over Xbox LIVE. There’s no single-player mode to speak of, with the remaining player slots under control by some questionable AI.

Each round begins with a race – the game features 14 courses based on various themes with seven only accessible once unlocked – each packed full of classic racing power-ups such as speed-ups (Supercharged Peppermint Candy), missiles (Fiesta Missile), and invincibility (Fizzy Bloater). The courses also feature shortcuts and speed up pads and who wins is often down to what power-ups you receive and how many speed pads you run across. Judged as a racing game against other genre classics such as Mario Kart, these sections of the game fall well short, but for younger gamers the simple racing is excellent fun. The option to keep races artificially close also makes it ideal for players of mixed skill levels to compete. Your finish position in the race provides bonus points for the challenge rounds that follow, so you’ll want to place highly if winning is your goal.

Depending on your game options a varying number of challenge events await players before the next race event. There are over 40 challenges in total, but each is based on one of six principles: Move & Collect, Aim & Fire, Smashing, Smash & Collect, Rhythm and Reflexes. Each category has more than its fair share of duds, but there are some stand-out challenges – Piñata Mess-terpiece, in which you must spread your colour paint over as much floor space as possible, deserves a special mention. At the end of each challenge points are awarded not only for the challenge just gone, but also the previous race event. Race bonus points stick with you for each challenge event and you only get the chance to improve your bonus points at the next race.

For the most part Party Animals’ problems lie with the controls, which while simple enough for the majority of young gamers are repetitive to the extreme, with very little in the way of skill required. Even the apparently skill-based challenges, such as target shooting, are best played by hammering the fire button to spray cannon balls at the moving targets. While younger gamers might be happy to play, parents forced to play with their children will find very little to enjoy.

One area in which Party Animals can’t be criticised is the presentation, with bright and colourful visuals bringing the world of Piñata Island to life with great effect. Character models are excellent and on the whole it really does feel like you’re playing a game inside the animated series. With split-screen play during race events there is some obvious slowdown, but rarely does this prove so severe to hamper gameplay.

The inclusion of online play is pleasing to see, but with a game of this type the best moments are those when four-players are huddled around a single screen. It’s implemented well enough with lag never a problem, but it feels wrong to play a party game sitting on your own.

For all its charm and my early enthusiasm for Party Animals, there simply isn’t enough creativity to make this a title families will keep coming back to. Perhaps the biggest tell of my disappointment came when I realised how fun the game could be if played on the Wii. In fact at this time in the life of the Xbox 360, the Viva Piñata franchise seems much better suited to the Wii than the hardcore gamer focused Xbox 360.

For all its charm and my early enthusiasm for Party Animals, there simply isn't enough creativity to make this a title families will keep coming back to.
5 Lots of games on offer Beautiful graphics Lack of creativity