With Virginia there’s a handy litmus test that we can get out of the way, right off the bat. You will probably not like Virginia if you disliked the majority of the following games:

Conversely, if you enjoyed all or the majority of those games and others like them, then you may well be interested in Virginia. This is not a value judgement in either direction. I’m just laying down a lot of context early on because I liked Virginia, but I’m aware that a lot of people will hate it. If the litmus test tells you you might be interested in this game, this review continues below. If not then just continue playing games that you enjoy, no harm, no foul.

Virginia is the sort of game that people will say isn’t a game, and it’s true that the levels of interaction in it are low. In a preview video of the beta VideoGamer’s Simon Miller described it as an “un-game”. To progress from scene to scene is often as simple as finding the object in the room you need to interact with. Sometimes all you need to do is walk forwards. Virginia is guiding you through a story, and I suspect how much you enjoy it depends on how much you like that story. It’s set in 1992. You, from a first person viewpoint, play as a newly graduated FBI agent named Anne Tarver, paired with a more experienced agent named Maria Halperin, and are sent to investigate a missing person case in the small town of Kingdom, VA. As you uncover more and more suspects Anne must juggle this case with an internal one: investigating Maria. Anne wears peach coloured nail varnish but has hands that look rough from hard work. She frowns in the mirror when she puts lipstick on, and has intense, prescient dreams that you navigate with her. The whole story is played out without dialogue or speech of any kind, so a lot of it is coloured by your own interpretation.

The line between reality, dreaming, and, later, impromptu acid trip, becomes deliberately blurred. If Virginia is a whodunnit it’s one where you never explicitly learn the who, or even really the dun (it has a ‘based on true events’ style line in the opening credits, but one assumes that it’s similar to the one in, for example, Fargo, i.e. mostly a lie), which is incredibly frustrating but probably part of the point. Even when you know Anne is asleep it’s never clear if what she’s seeing is what actually happened or just what she believes happened, as she tries to untangle a familiar cast of small town characters: the pastor and his wife; the teenagers hanging around the observatory; the man campaigning for mayoral election, van with loudspeakers and all. The investigation takes place over a week, and on most days you go to the same diner and drink hot, black, coffee. You get glimpses of Anne and Maria’s pasts, and how they struggle with them. Maria takes off her wedding ring to go dancing, but she lives alone. Anne keeps a broken key and dreams of watching herself.

Virginia is openly inspired by 90s TV shows like Twin Peaks and The X-Files, and it’s very successful in recapturing their atmosphere. You transition between scenes with hard cuts or dissolves to black, which is jarring until it clicks that you’re playing an episode of television. For me this happened when I was going down to my new partner’s office for the first time. I was walking to the top of some stairs when the screen suddenly jumped to halfway down them, and then again to the end of a corridor. You don’t have to drive to every location, or walk down the whole flight of stairs: the game gives you only enough context to know what’s going on. It’s a stripped back way to tell a story, which can be interpreted either as elegant or empty. A single play through only takes a couple of hours. The visuals are stripped back too. It’s low on polygons but high on striking imagery, like the scarlet songbird which becomes a motif. More striking still is the fantastic score, which is orchestral and full of swelling violins that reach their peak at the most dramatic or significant moments.

As a whole, and occasional framerate drops aside, Virginia is wonderfully cinematic, and a fantastic story to inhabit as it unfolds. It’s just not for everyone. Which is true of everything that’s ever been made, I suppose, and in this case at least what has been made is new and different, and incredibly stylish.

As a whole Virginia is wonderfully cinematic, and a fantastic story to inhabit as it unfolds.
8 Stylish, stylised visuals and excellent score Intriguing story Successfully captures the spirit of 90s TV Short; walking simulator; the usual 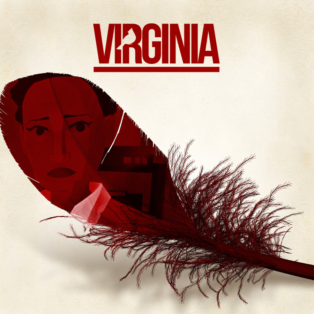