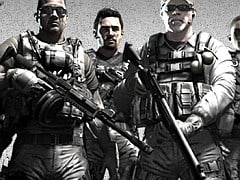 I can imagine the design briefing Zipper had with Sony before starting development on Unit 13. No doubt a very strict development cycle was given, along with the stipulation that the game must cater towards breezy bursts of gaming that you can do whether you have 10 minutes or two hours free. The good news is that for the first time a handheld platform could make use of two analogue sticks, and there’s a handy touch screen to put extra controls on.

The result, whether or not it came about like that or not, is a third-person military shooter that doesn’t bother trying to tell a story or develop characters, instead giving the player 36 missions spread over four mission types: Direct Action, Covert, Deadline and Elite.

Each mission comes with a difficulty and length rating, so you know roughly what you’re getting into before you attempt it, but it’s the mission type that will ultimately determine how much fun each is to play. Direct Action is easily the most entertaining, by virtue of being the least frustrating. You have objectives (disarm this, blow up that, rescue hostages, etc), but the only failure criteria is death.

The other three types can still be fun, but numerous ways to fail and increased difficulty make them extremely hit and miss. Covert missions are instantly over if a guard raises the alarm or a security camera spots you (and you don’t take it out quickly), and this makes for some extremely frustrating moments. Despite the best efforts to make the game play like a home console title, I simply wasn’t able to take down foes anywhere near as quickly as I can on a PS3 pad, resulting in guards getting away when they really shouldn’t have.

Deadline is frustrating due to the ticking clock nature of the missions. Time after time I’ve failed a mission while being agonisingly close to the finish. While I’m sure an argument here is that I’m simply not good enough, repeated failure at such a late stage in a mission becomes hard to tolerate. And Elite missions are a true test of willpower. Without any regenerating health, no checkpoints and tougher enemies you’ve got to be incredibly careful while moving through levels or else it’s back to start for you – which is fine if you die early on, but failing near the finish line is maddening.

All of these problems might not seem like big issues, but it’s how they’re encountered that hurts the game the most. Annoying AI (including grenade spammers – one of the most infuriating enemy behaviour ever) is a constant cause of death during Elite missions, and the not quite precise enough dual analogue controls allow guards to raise the alarm. I had a constant sense that many of my frustrations were brought about in an unfair manner.

Each mission can be tackled by a number of different soldiers, each with their own skill set, and XP is earned as you play which levels up your characters. In theory this would allow you to tackle levels in a variety of ways, but I found most classes to be inferior to the gunner in almost all situations – and once you’ve levelled up a character (and unlocked kill and streak bonuses) I don’t see why you’d want to try out someone new.

Tying together the missions is a leaderboard system that shows you how you’re doing in each challenge compared to friends, people locally (via Near) or globally. This is all well and good, but I never felt compelled to strive for high scores. Compared to the other Vita title currently offering a lot in terms of social integration, MotorStorm RC, Unit 13 simply doesn’t make a big enough deal out of its leaderboards. They are there, but the game doesn’t make you care about them.

Each mission can be tackled cooperatively with a friend, which in many instances does improve the level of enjoyment you’ll get from the game by virtue of making things a lot easier – and voice chat works surprisingly well. It doesn’t make what you do any more exciting, though, with the basic list of mission objectives becoming rather samey way before the final mission.

Extra challenges are offered through the High Value Targets missions, unlocked after earning a certain number of gold stars through the main 36 levels. While these play out in much the same way as before, the overall goal is to assassinate a certain NPC and getting there means killing an awful lot of grunts.

There are also daily challenges, which is the one thing the game seems to make a big deal out of in terms of the social networking. The idea of a new daily event is a good one, and its time-limited nature and one-shot mentality instantly makes it more appealing to take part in, but the general re-use of maps will surely make this less appealing in the weeks to come.

Visuals might not mean as much to Unit 13’s overall goal than its social features, but it’s still a shame that the game doesn’t look a bit more impressive. Occasionally your decently modelled character will be stood in a room with the light hitting in just the right way, his shadow being cast across the ground, that you’ll think, “actually, this isn’t a bad looking game,” but then you’ll head outside and find a drab level populated so sparsely that the whole thing feels unfinished – which is more or less a statement about the game as a whole.

As the first military shooter on PS Vita, Unit 13 has the market more or less to itself, but it’s a game that comes some way short of delivering on its portable gaming promise. Certain key aspects of the game don’t feel like they’ve had enough time spent on them, so the result is a game that is on the right tracks but more of a taster of things to come than something Vita owners should celebrate.

As the first military shooter on PS Vita, Unit 13 has the market more or less to itself, but it's a game that comes some way short of delivering on its portable gaming promise.
6 Can be fun with a friend Decent portable gaming philosophy Frustrating far too often Feels like it needed more time in the oven

A third-person shooter for PS Vita

A third-person shooter for PS Vita