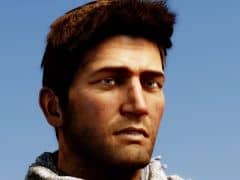 The Nathan Drake Collection is a Bluepoint remastering project, and as such it is excellent. Well, technically at least: we’ll address the content of the games in a moment, but for those of you with an inclination to love Naughty Dog’s trilogy no matter what, even if Drake himself had snuck into your house and choked your dad to death before nicking your mum’s pearls and calling your dog ‘pal’, you’ll be delighted with how his adventures have been rejigged and upgraded for PS4.

The series was already known for substantive quality leaps between instalments, particularly the first and second, but Bluepoint has worked hard to introduce a consistency across the three, adding certain attack animations (the ‘baseball’ grenade throw) while tweaking less obvious issues. Drake’s Fortune is still by far the worst-looking, but much of that is to do with its samey jungle environments and rigid, right-angled level design. Texture and lighting work upgrades are very good, given the base game: not PS4-level quality, rather flat and pre-baked looking in fact, but, far, far better than before: clean and clear and solidly presented.

Elsewhere, updated character models help no end, and the elimination of screen tearing has a huge impact. While in retrospect you’ll no doubt be bored of Drake’s Fortune long before you see the credits – it has aged terribly, far more so than the others – that it can even stand side by side with the other games in the collection and not stick out like a sore thumb is testament to the work put in.

Uncharted 2 saw huge improvements, both in visual fidelity and almost everything else, over its predecessor, and Bluepoint builds on that well. The three games’ art design and direction always saw them stand out among a sea of ‘military grey’ shooters, and both the density and diversity of the foliage and other flora found in the Borneo chapters is superb. (Compare and contrast to the vibrant if samey jungle environs in the original Uncharted.) Texture work is again one of the most impressive elements of the upgrade, especially in the ‘Urban Warfare’ chapter, where you’re fighting through the rubble of ruined streets and shattered building facades.

Get close enough and you’ll see that it’s not quite current-gen level, looking flatter, less dynamic. But this is, of course, the nature of the beast: while the upgrade to 1080p and sterling texture/lighting buffs make the game look better overall, they highlight that Bluepoint are working from old games: there’s little to hide behind here. Given how sharp and colourful everything now looks, it’s more cartoony than ever, and some characters now look rather like Thunderbirds than real people, but it’s a fantastic effort nonetheless.

As expected, Drake’s Deception is by far the most modern-looking game, fine-tuning the excellent effects work of Uncharted 2 (that game’s hazy, hanging fog is worth mentioning: it’s amazing how static Drake’s Fortune looks next to the later two). There’s the benefit of a strong template to work from, with deft use of lighting both natural and man-made and its strong principal character models. Remasters are balancing acts, and it’s been handled well. Put UC3 next to Drake’s Fortune and you can see what a great job a) Bluepoint has done bringing the original anywhere near in line with it and b) Naughty Dog did in the original instance.

Technically then, this is the best version of the Uncharted trilogy you’re ever likely to see: an intelligent and well-crafted update, one which also adds in a new mode built around speedrunning, with an onscreen clock and everything, for those who want it. Sadly there’s not much that Bluepoint can do to update the core mechanics, some of which are creaking badly, with the shooting in particular being annoying at best and terrible at worst.

Sony has claimed Bluepoint has improved the feel of the shooting across all three games, but it’s still poor. Drake’s reticule sweeps S L O W L Y, like the hands of a clock, rather than snapping to enemies, even with the sensitivity turned way up. This makes the lack of strong aim-assist maddening, given that you’ll want to be in and out of these sections with the minimum of fuss. More galling is the fact that the shooting just isn’t any fun, which is rather dispiriting considering there’s so much of it.

The combat, although weak, could have been somewhat forgiven if you felt any urge to shoot anyone at all, but there’s no drama to proceedings, no tension, no real need for any of it (barring enforced mechanical variety). Drake himself seemingly takes no pleasure in killing, so you have whole sections where he’s going ‘whoa, easy, don’t shoot’ before shooting and killing tens of people. Your bullets carry no weight, landing softly on enemies who then botch a cartwheel to their deaths, and your melee attacks feel like Drake is hitting enemies with a wet sock. There is nothing at stake here: a killbox is closed off and you shoot some people, badly, before going on your way.

The platforming elements fare better: never really challenging, but enjoyable all the same, especially when scaling large natural structures. But even these are hamstrung by some insane over-animation (which isn’t helped by the leap to 60 frames): Drake can’t simply turn, he must pirouette, dashing about in the frame, making for some comical three-point turns, his arms flailing, legs jutting, head wobbling. It all feels so loose: he moves, under even the simplest instruction, like a frog in a fire, a FIFA player model out of time and place.

Odd too, in retrospect, are some of the other climbing sections, especially when they don’t take place in the jungle/other appropriate places. Does Drake really need to climb over a bombed-out building when engaged in a street-fight with some baddies because a wooden door is locked? Why doesn’t he just throw one of his grenades at the door? The rest of the house is fucked anyway. The answer, of course, is because it’s a closed set, and there’s not much to actually do in these games but climb and shoot, no matter how strange it seems to do so. At its best, the series hides this superbly. At worst, its obvious you’re an actor on a stage. Don’t get me started on the Young Drake section near the beginning of Uncharted 3.

Time has not been kind to Uncharted, then, but the latter two games are still enjoyable, despite their many flaws. The obvious influence of Saturday serials of the 50s (and the films which were inspired by them from the 80s) is interpreted well, dragging players through to the next big set-piece, and while he is a serial killer and mad war/conflict profiteer, Drake is also a somewhat charismatic shit-eating grin of a man, as are his friends. It’s like an ultraviolent travel show, presented by three or four people who seem to be having a great time. It’s just a shame the player has to slog through so much nonsense to join them.

Note: if you’re just here for an appraisal of the remaster, feel free to make yourself feel better and add two points to the score.

A sumptuous remaster, but the games themselves have aged badly.
7 Superb remastering job Has some excellent set-pieces Drake is over-animated Shooting is still terrible