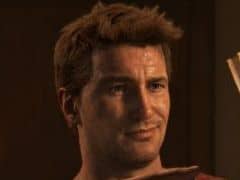 There he is, Nathan Drake, the aww-shucks gee-wizz smart-ass mass murderer of yore, back again for another adventure, except now he’s older, retired, and – for reasons best never explained – has pictures of people he’s killed over the years attached to bits of string in his attic. He has a wife he loves and a life he hates, an office job and a troubled if romantic past. If Uncharted and its two sequels were a hyper violent Whicker’s World fronted by a clapback-addled Abercrombie and Fitch model, then Uncharted 4 is a more introspective reckoning with the (supposed) end of an era, albeit one which also happens to feature more ventilation than Nakatomi Plaza.

That it manages to make Drake’s plight – his indulgent nostalgia and sense of loss, in all its many forms – marry well with swinging from a grappling hook and shooting people in the face is down to two things. The first is the game’s phenomenal performance capture, which is capable of genuine expression and, while sometimes veering into the valley, manages to communicate tone and intent in a way that takes the weight off the dialogue. The second is that Naughty Dog is, in a post-The Last of Us world, confident enough to take on these themes at all, channeling their own feelings on the end of an era into Drake himself.

And so while there is spectacle, and a lot of it – a winched jeep getting knocked about like a petrol station football, a clock tower escape which is up there with the best the series has to offer – there’s also more room for character to go along with the action. Dialogue choices are rare but well-placed, and there are what seems like fewer killboxes. Instead there’s more exploration, more adventure.

Which is welcome, as much-improved visuals aside you’ve been here and done all this before, many times now. There’s the jungle bit, obviously, and the bit where you have to infiltrate a heavily guarded, ostentatious building while a smug man with a haircut chides you. Oh, and the bit where you climb a mountain to reach a snowy fortress at the top of the world. And how could we forget the bit where you get chased by a big armoured truck-thing while the camera looks at you from the front while you run away? Almost as good as the bit where you take to a dense urban environment to have a little shootout and destroy the whole place.

It’s familiar, then, but it also feels a little different in its approach, and a lot more refined in some of its systems. Wider play areas help this, as does rudimentary stealth and long, picture-perfect travelogue-style gaps between the shoot-bang, which in and of itself is much, much improved: faster, more responsive, and with some clever UI tricks (firing quickly sees a wild but somewhat predictable reticule appear within the default sight, giving you some semblance of where your shots are going to group). Amazingly, for a series best known (and remembered) for its good looks and expert set pieces, Uncharted 4 is at its best in its quieter moments for a lot of its runtime.

Still, let’s not get too carried away: I don’t mean to say that Uncharted 4 is fucking Magnolia or anything, and there are several missteps along the way. Some are more severe than others: Samuel Drake’s (re)appearance – and Nate’s reaction to it – is bizarrely underplayed, and Elana joining Drake and co on location (as it were) is cheap and reeks of deus ex machina. In fact, her absence from the middle third of the game is adverse to the success of the overall story: it’s simply stronger when she’s around, a grounding force to go alongside the Boys Own adventuring (with interspersed bickering).

At least the narrative justification for her absence does enable the developer to pick at the relationship between Nate and older brother Luke Perry, played with weary charm by Sam Drake. The development of this relationship is one of the game’s core appeals, ranging from them as young boys to middle-aged men, and at times it is a somewhat tender look at how people grow apart, forced or otherwise. Supporting characters fare less well: Sully is, well, Sully, and Jake Gyllenhaal’s haircut turns up as privileged, deranged CEO/explorer Rafe Adler. The pick of the bunch is Nadine Ross, the real power behind Adler. Owner of a PMC, she’s smarter than the boys (by virtue of emotional distance to the mission) and stronger than them (by virtue of being a lot fucking stronger), and spends most of her screentime beating the shit out of one or all of them. A shame, then, that she doesn’t appear more often.

That the story is so unusually (for the series) well-rounded also helps to mitigate, if not outright disguise, the game’s failings elsewhere. Most of these are related to Uncharted 4’s worst crime: padding, of which there is more here than a police dog training centre run by the Stay Puft Man based in Paddington. The levels themselves are a joy to be in: a freezing Scottish mountain, sun-baked Madagascar, and a secret pirate jungle retreat are expansive, beautifully rendered, and boast not only a sense of immense scale but of breadth and width, that you’re exploring them rather than using them as a set dressing.

So it is a little more than frustrating to have your progress through these locales constantly interrupted with maddening, artificial roadblocks. This is a game which, despite Nate having a grappling hook that he uses (in some of the game’s best moments) to swing from place to vertiginous place, won’t allow him to climb up eight feet of wall. In its stead are more boosts than a British newsagent: Drake constantly has to help a support character up and over obstacles (all of which could easily be surmounted by Drake himself), before they invariably push a wheeled crate off from the top so he can climb it.

Uncharted 4 does this, roughly, approximately 600 times in 12 hours, and it’s old and tired by the third go around. It is needless, and interrupts the flow of seeing Drake hang, jump, swing and piton his way across vast environments. Other mechanics are also drastically overused: there are so many slipey-slidey sections, where Drake and co barrel down to certain death on their butts, that I fear Dave Perry may get PTSD should he ever play it. That the characters comment on the frequency of these slides is enough evidence that even the developers themselves probably thought it was a little overdone.

Naughty Dog could have lost two-thirds of these sections and the game would have been all the better for it. The same goes for the needlessly indulgent epilogue: as the game spirals from a satisfying, pathos-laden conclusion into its third or fourth ending it’s difficult to care anymore, as the developer struggles to let go in a game about a character who struggles to let go.

So there goes Nathan Drake, off into the sunset, and with him a whole generation of memories and other lies. The first three games haven’t aged well, and so it’s a relief that Uncharted 4, base similarities aside, feels markedly different to them. It’s a confident, assured, and rather more intelligent game than it first appears, and a strong end to the series.

If you like the sound of Uncharted 4 you should pre-order it now from Amazon for launch day delivery.

It's a confident, assured, and rather more intelligent game than it first appears, and a strong end to the series.
8 More Uncharted