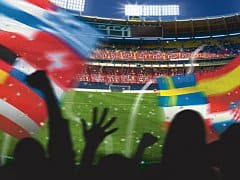 We had great plans for this summer in the VideoGamer.com office. We’d already agreed that we’d be stopping work to watch England games during Euro 2008, set up a makeshift bar, wear our England shirts and shout a lot – presumably at the ref. These plans were of course scrapped when our pitiful nation failed to even make it into this summer’s biggest football tournament, but this hasn’t stopped EA from releasing a tie-in a few months ahead of kick-off. Can some improvements to the FIFA 08 game engine stop the tears?

The first thing to note about UEFA Euro 2008 is that it plays very similarly to FIFA 08, no matter which version you opt for. On PSP, PS2 and PC you get a game that plays remarkably similar to Pro Evolution Soccer, whereas on Xbox 360 and PS3 you get the completely new next-gen engine that we’ve had for a few years now. It’s the next-gen versions that seem to have received most attention, with the gameplay now flowing better than in FIFA 08. It still doesn’t feel quite there (at times you’ll be knocking the ball about in midfield like you’re playing pinball) but EA is certainly one step closer to nailing it – excellent news for footie fans seeing as PES seems to be going in the opposite direction.

So, on the pitch things are really rather good. Long-time PES players can once again choose to play using a control layout that mimics Konami’s classic series, so the learning curve isn’t as tough as it once was. Being an officially licensed product of UEFA Euro 2008, you won’t find any of the club teams that you get in FIFA, or the likes of Brazil and Argentina; this is strictly international teams from Europe, including those that failed to make it into the tournament proper. Cough, England, Cough.

Core to the game is what EA calls Battle of the Nations. On starting for the first time, you’re asked to choose your favourite nation, with all your performances in the game’s various game modes then counting towards an overall ranking for your nation. The team you actually play as in the game doesn’t have to be this nation, with strong performances as weaker teams actually benefiting your nation’s position on the leaderboard more. It’s certainly a nice feature, and in keeping with the competitive nature of this summer’s tournament, but isn’t likely to keep you hooked for too long.

The game mode that is likely to be of interest to many players is the Captain Your Country mode. Here you play as an international player (either from the current squad or created by you) and that player only. If you’re a defender you’re going to be defending for the majority of matches, whereas strikers spend a lot of the time on the shoulder of the last defender waiting for their opportunity to get a shot on goal. Played from an almost third-person point of view, you feel far more immersed in the action, and you can even signal if you want your team mates to pass to you, play a through ball or shoot. On the pitch it’s essentially the same as the Be a Pro mode from FIFA 08.

Your goal, as the title suggests, is to become the captain of your country. You start off as a player in the B team, but perform well enough and you’ll get your shot in a proper England friendly. Your player starts with basic stats, and you’re able to increase these using points gained from successful performances. Do well enough and eventually you’ll get the captaincy role that you’ve been playing for. You’re not alone going for this though, with three other players, either AI or human controlled, also competing for the attention of the manager.

Outside of this mode you’ve got the usual suspects: Kick-Off allows you to play one-off matches against AI or a friend; UEFA Euro 2008 recreates the entire tournament experience, including qualifying if you want to be that hardcore; Euro Online Knockout Cup lets you play in 16-player online tournaments; and Story of Qualifying lets you replay or rewrite moments in European Championship history. On top of this there’s the usual array of online game options, including one-off friendlies and leagues.

On PSP, PS2 and PC you do miss out on a number of features. Most significant is the Battle of the Nations, which is completely missing, as is online play of any sort in the PS2 and PSP games. On PSP you also miss out on the Captain Your Country mode, but this is replaced by some mini-game-like events. The PC and PS2 games also include Kick Stick, a feature which allows you to take set pieces with more precision and power. Overall though, we’d still take the Xbox 360 and PS3 versions due to the next-gen gameplay engine, stunning visuals and enhanced online features.

One area in which FIFA has always excelled over PES is presentation, and Euro 2008 is no different. The last-gen versions look decent, but on Xbox 360 and PS3 the level of detail is on a whole other level. Things like players planting a foot just before a change of direction and the way a volley animation actually varies depending on the height of the ball often make Euro 2008 stunning to watch. It’s far from perfect though. Both next-gen versions suffer from some slowdown (worse on the PS3) and there are numerous glitches that see players popping into view during non-gameplay moments. The commentary is also pretty terrible, with the duo of Martin Tyler and Andy Townsend often completely ignoring the in-game action in favour of their own stories.

The big question hanging over Euro 2008 is if it’s worth its price tag, given that it’s essential a tweaked FIFA 08 and FIFA 09 is only a few months away? The core gameplay has been tweaked enough to make FIFA 08 feel slightly dated, but chances are FIFA 09 will improve on this even further. If you support a team that actually made it into the tournament then the hype over this summer’s footie is likely to win you over, but for everyone else it might just be too much of an unpleasant reminder.

The core gameplay has been tweaked enough to make FIFA 08 feel slightly dated, but chances are FIFA 09 will improve on this even further.
8 Superb visuals Captain Your Club Online functionality Only small changes over FIFA