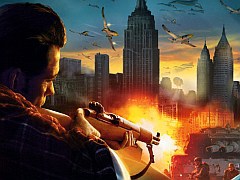 Take a hugely successful genre (FPS in this case), use a well established and advanced game engine (Unreal Engine 3), throw in a storyline with a twist to make it different to the norm (a world where the Germans invaded America during World War II) and you’d expect good results. Sadly Codemasters’ alternate history WWII FPS Turning Point from developer Spark Unlimited falls a long way short of its potential and finds itself languishing near the bottom of the currently available next-gen shooters.

Things start off interestingly enough. You’re working as a builder atop a tall skyscraper in New York, 1953. From the sky suddenly comes a German assault, with planes zooming in and giant zeppelins soaring above the New York skyline. Despite the less than spectacular visuals on display, it’s exciting enough and sets the tone well. You’re just an ordinary guy who’s been flung into combat, so soon you meet up with the military guard and become part of the resistance. Turning Point’s biggest problem is how inept you are with a gun, something we presume wasn’t a deliberate design choice made to add realism to your plight.

After Turok’s overly twitchy controls which we just couldn’t get to grips with, it’s hard to imagine another game being worse, but Turning Point has managed it. As in most WWII shooters you get better aim by looking down your sight, but whether you use that or aim freely from the default view, targeting and shooting Nazi soldiers is a nightmare. For whatever reason the aiming in Turning Point kills whatever hope the game had of being entertaining.

The rest of the game is rather meaningless considering the most vital component is so heavily flawed, and it doesn’t do much to assist anyway. Linear games are fine (Call of Duty is a series built on linearity), but in Turning Point it feels far too signposted. Your route is always made abundantly obvious thanks to every other possible path being blocked, usually by rubble or fire, and there are far too many corridors, even when you’re outside. Narrow streets and underground tunnels are the order of the day, and it becomes tiresome very quickly.

You’ll also encounter numerous non-shooting bits, like when the camera switches to a third-person view when you climb objects or shimmy along ledges (something that’s slow and tedious), and planting bombs on tanks is a mini-game in itself. Had the core game been fun these sections might have felt like decent diversions from the frenetic core gameplay, but they simply feel tacked on and not worth the development time. As is the melee combat system, which gives you a choice as to how you’re going to dispatch your targeted enemy soldier. You can even take one as a human shield, but in practice going alone (and moving faster) was a much better option.

As if it wanted to take Turok as an example and out do it in the badness stakes, Turning Point even features some ridiculous checkpoints. I lost count of the number of times I swore I’d give up if I had to play through the same section again. Of course, I soldiered on, but I doubt most people would have the patience. It’s just another obstacle in the way of getting any enjoyment out of the game.

Venture online to take part in any of the included multiplayer game modes and you’re unlikely to have much fun either. Finding a game is hard enough, and when we did manage to get a decent group together the lag was so bad it was hardly worth the effort. Considering the flawed control system from the single-player campaign is present in multiplayer, it’s a mode that’s just not worth the effort.

If the gameplay isn’t enough to put you off, the visuals definitely will. Turning Point uses the Unreal Engine 3, but it certainly doesn’t look like it. The environments are bland and full of muddy textures, there’s an abundance of sharp lines and angular objects, character models seem a generation old and animations are terrible – you have to follow an ally and watch his ridiculous clunky running animation to see one of the most awkward animations we’ve ever seen in a video game. All this isn’t helped by a consistently poor frame rate, which stutters more than it has any right to.

It feels a little wrong to be so down on a game that seemed genuinely interesting when it was first announced, but Turning Point is so devoid of the qualities needed in a modern FPS that it’s impossible to sugar coat. It’s just a very bad game, plain and simple.

Turning Point is so devoid of the qualities needed in a modern FPS that it's impossible to sugar coat. It's just a very bad game, plain and simple.
3 Decent idea Controls are overly twitchy Terrible visuals Online is awful