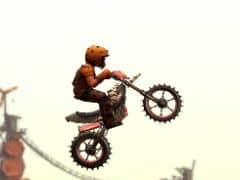 There’s a well-known tenet of making smartphone games. Quite simply, direct console ports seldom dazzle. They need re-appropriating, reimagining and rebuilding. A ‘three Rs’ of smartphone game design, if you like.

Red Lynx has certainly embraced that mantra in taking its series – a long time occupant of the 360 – to iOS. Though the familiar physics-heavy motorcross-platformer that has long-defined the series lurks at the core of Frontier, it’s a game significantly tweaked and tuned. The results of that tinkering present a mixed bag, and a release aggressively sculpted by free-to-play mechanisms.

At a basic level, it is Trials all over again. Leaning back and forwards, along with jabs at accelerate and brake, allows for tearing through towering 2.5D stages built from ramps and ledges.

But gone is the difficulty and nuance of control seen in previous titles. Similarly, the variety of level design has been constrained, focusing on undulating rollercoaster-like offerings. It may not sound like progress, but for short burst play on a touchscreen device it’s absolutely a smart spin on the established formula, and well implemented.

So far, so Trials. But this is a free game with a powerful thirst for cash. As such, Frontier has been fleshed out, not just with a storyline and characters, but with numerous elements that serve as currencies. Fuel, coins, and gems together form a tangled web of part upgrades, level unlocking and grinding for special items.

Ultimately, it boils down to one thing: Trials Frontier will make those that don’t pay wait. There is a lot of game in there for those who refuse to pay, but they will be limited to a few ten minute sessions a day. ‘Pay to win’ it isn’t, and there’s nothing wrong with free-to-play per se, but here its implementation is tremendously intrusive.

Frontier ultimately stands as a fun, polished motorcycle game bloated by its own free-to-play filler. It has plenty to offer – including some brilliantly spectacular visuals. Things are a little too repetitive, however, and something special is lost through Frontier’s particular capitalist make-up.

A fun, polished game bloated by its own free-to-play filler.
6 Polished visuals and audio. When you do get to ride, it’s great fun. Too much need to revisit stages. Monetisation elements hugely disruptive.