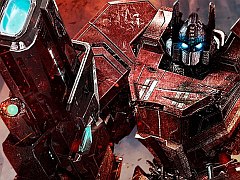 There were two types of people born in the 80s; those who played with Transformers toys as a child, and girls. Transformers: Fall of Cybertron, High Moon Studios’ third stab at the iconic license, often feels like it’s aimed squarely at the kind of people who knew the pain of owning four out of the five Combaticons required to construct Bruticus. I never did get that bloody Swindle.

That might mean nothing to you, but you should know this game wasn’t made with you in mind if you’ve managed to get through your life without going gooey for Stan Bush’s Touch at least once a year.

A large chunk of Fall of Cybertron is designed as pure fanservice, with the game taking great pleasure in showing you moving, shooting versions of all the toys you had (and did not have) as a child, which much of the game emanating from the original 1984 series that’s been twisted, splayed and rebooted numerous times over the last two decades . Hurrah, then, as you get to square off against both Autobot (goodies) and Decepticon (baddies) in a third-person shooter with a cast dense enough that your mother would never, ever buy this many toys for you, even if you got all of your spelling tests right for months. And, yes, Bruticus is here – voiced by none other than Nolan North – and this brief calamitous level filled me with a buzzing high powerful enough to make me check how much Swindle was going for on eBay (about £10).

Like its precursor War for Cybertron, the game doesn’t really make much out of its transforming heritage. High Moon Studios opts to spend most of its resources making a third-person blaster, with a nicely taut campaign that revolves almost entirely around wheeling out a procession of characters for their one act in the spotlight. Each level is themed around the special ability of that character, and just as you’re starting to get used to their gimmick it’s time for the next. This creates a punchy game, the campaign switching things around a dozen times across a fairly brief but ornately constructed six-hour campaign, and the variety of characters helps take your focus away from the fact that a lot of what you’re actually doing feels rather rote and repetitive.

A third-person shooter is a hard thing to sell these days, but High Moon manages to get away with it thanks to its clever bait-and-switch presentation. Fall of Cybertron manages to sell its variety with more gusto and individuality than its predecessor, which just had you running and gunning around the same metallic environments as the same trio of robots shooting the same identical goons. Fall of Cybertron is a shooter through and through, but it’s one that sparkles thanks to a decent script, clever characters and the fact it steers well clear of the territory most other shooters are aiming for.

The class-based multiplayer adds an additional thrill to the proceedings, and it’s worth a go just for the joyous first time you haul ass between spawn point and firefight by transforming into a bloody plane. But with a limited selection of pretty crappy maps, this is a multiplayer mode that’s unlikely to soar after an entertaining but ultimately empty fortnight. There’s a solid bedrock of good ideas at play here, but the game lacks the technical proficiency to make it work.

Transformers: Fall of Cybertron doesn’t come close to recapturing the magic of fighting Autobots and Decepticons in the bedrooms and playgrounds of our youths, but High Moon Studios has created something that allows us to fondly recall those bygone times.

Fall of Cybertron sparkles thanks to a decent script, clever characters and the fact it steers well clear of the territory most other shooters are aiming for.
8 Loads and loads of Transformers Makes you feel like a child again Multiplayer won't last you too long Won't hold much appeal if you're not into Transformers