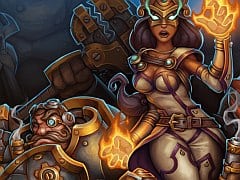 This comparison is not meant to be taken negatively; many have been waiting for another game like Diablo II for 12 years, and Torchlight II is the closest you’ll get to Diablo II without actually going to the effort of inventing a time machine and going back to the year 2000. But even though Runic Games’ sophomore effort often manages to upstage its iconic inspiration, it’s hard to shake off that lingering sense of deja vu in a game where even the conceit – a former hero from the original game has turned bad – is identical.

So, yes, after the murky field comes a desert trek, a swampy romp and then a brief sojourn to an altogether more demonic environment. But Runic Games just about gets away with it, mainly because Torchlight II comes trussed up with kind of saturated colour palette that will likely cause the eyeballs of those who protested about Diablo III’s art direction to dissolve in a fit of indignant rainbow-tinged fury. But, really, I think it’s impossible not to fall for Torchlight II’s striking display of rich hues and bold shapes, as you run about biffing and boffing thousands of beaming monsters and colourful nasties that look like what Satan might conjure up after a sugary Skittles binge.

Torchlight II is a game where you don’t just kill monsters; you smash them into colourful crimson puffs of viscera and splatter their insides across ornate, previously undisturbed architecture. Everything dies eventually, but in Torchlight II you charmingly expedite the process for about 10,000 nasties over the course of 20 hours, all the while looking for a tasteful new set of booties that manages to boost your core stats while maintaining the upper echelons of style your mute character demands. Or maybe that’s just me.

Your enemies are piñatas stuffed with gold and gear, and while Runic Games hasn’t mastered Blizzard’s all-encompassing mastery of the incremental and statistical, it has rather wonderfully realised that giving the player resplendent items from the very beginning of the game is loads of fun. Within a couple of hours of play you’ll find yourself trumpeting around with the perky bonuses conferred from matching armour sets, mulling over which of your many unique hats you want to adorn your bonce with, and agonisingly deciding which of the game’s many weapons you want in your primary and secondary slots. My answers: one with pointy horns, and two claw weapons for my sassy Berserker with a bow as backup.

Many have criticised Blizzard’s choice of closed systems in Diablo III, though for its obvious weaknesses such a system confers considerable bonuses; the developer has complete control of the game’s systems, and these are very much gameplay experiences designed entirely around mechanics. Torchlight II, on the other hand, embraces an open platform. Runic can’t hope to compete with such a tight focus on mechanics, or that perfectly tuned progression of loot and stats, but its game positively welcomes crazy modifications with open arms, even if it does mean the game’s harsh respec options will be effectively made redundant as soon as someone makes the inevitable potion to handle it. I imagine by Christmas I’ll be running around on my quest to hit level 100 while dressed as Conan the Barbarian.

Torchlight II’s world is randomly generated, and whoever coded the algorithm to seed this world really did a lovely job, and it’s all done so seamlessly you might be fooled into thinking these corridors have been individually authored. Each of these rolling environments are liberally dotted with emergent events and enough interesting side-quests that you’ll find yourself naturally exploring every dead end in the off chance of stumbling across another thread to a new quest, and the jubilant promises of bounty and riches such incidents entail.

Your conduit to this wanton destruction is via one of the four endearing character classes, with the Embermage proving the early favourite for most players with his (or her) high-damage output of the elements. Then there’s the canny combination of the Berserker, who summons wolves and whose up-close-and-personal melee attacks can shear through most opposition, and the ranged focus of the Outlander, who plinks away at enemies from a comfortable distance while tossing out the occasional curse. Lastly there’s the Engineer, essentially a summoner class whose mechanical legions of entrenched turrets and skittering drones prove to make some of the most entertaining but tricky moments of the entire game.

Combat isn’t quite as tactile and responsive as it could be, mind – the simple act of cleaving a sword through a monster sometimes feels a bit aloof and disconnected – though Runic Games manages to sufficiently crank up the potential skill combinations, occasional charge bar bonuses and on-screen enemy count that you won’t really notice amid all the chaos.

The most important addition for many, however, will be the six-player online co-op, which can be accessed once you make an account on the Runic Games website and login through the client. Here you thrash through beefy swathes of opposing forces as a team, with a game that’s prepared to test you on Veteran difficulty in a way you’re unlikely to feel if you tackle the gentle Normal difficulty in single-player mode. These online modes are a vital feature (and it’s easy to forget the original didn’t have multiplayer) that have been elegantly implemented with a matchmaking screen that neatly lumps you together with people who are roughly around the same stage of the game as you are.

In many respects Torchlight II makes for a delightful counterpoint to Diablo III. The best way to think of it is to cast your mind back 12 years, and I promise this is the last time I’ll mention Diablo II. Diablo III is the evolution of Diablo II’s closed multiplayer realms, whereas Torchlight II is the next logical step for its open servers. The two games, both born from the same pool of influences, end up complementing one another perfectly.

Torchlight II is up there with the best examples of the genre, but Runic Games makes very little attempt to advance the genre beyond what we were already comfortable with a decade ago. Tweaks and refinements help Torchlight II’s mechanics sing beautifully together, and certain efforts to streamline the whole kaboodle go down a storm, but innovation isn’t really the focus of this blisteringly colourful, entertaining but ultimately familiar romp.

Torchlight II is up there with the best examples of the genre, but Runic Games makes very little attempt to advance the genre beyond what we were already comfortable with a decade ago.
8 Great aesthetic Mod support Great character classes Combat could be a little tighter

Expanding on the whimsical and quirky world captured in the original Torchlight,…

Expanding on the whimsical and quirky world captured in the original Torchlight,…