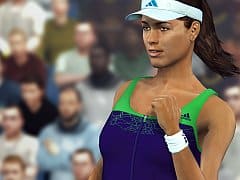 With Top Spin 3, 2K Sports delivered a tennis game that didn’t play like all the others. It wasn’t just a re-skinned Virtua Tennis, instead offering a more nuanced control scheme that relied heavily on precise timing. Almost three years later, Top Spin 4 tweaks the system and introduces a number of helpful guides in an attempt to better convey the game of tennis. The result is a title that, while not breaking any fresh ground in the genre, is more refined and likely to win over die-hard Virtua Tennis fans.

Top Spin Academy is your first port of call, from which you can learn everything there is to know about playing a perfect game of tennis. This straight set of instructions and drills will seem a little dated compared to some tutorial systems, but it teaches you what you need to know and is essential if you want to become competent.

Timing indicators pop-up after every shot and tell you whether you swung too early, late, or perfectly and, while some players may find it getting on their nerves, the constant reminder that you’re crap should drive you forward in a quest for perfection. Similar on-screen markers show how much power you’re swinging with, and all of these can be turned off once they’re no longer needed.

The basic system of one button assigned to each shot type – standard, top spin, slice and lob – remains, with you holding down said button to add extra power to the swing or releasing instantly to perform a controlled shot. This time you won’t miss completely if you don’t release the button, however; your timing will be wrong, meaning there’s a greater chance that you’ll skew your shot wide of the court. Serving is similarly based on precise timing, but it’s the aim of your serve that’s hardest to master, relying on holding down a direction for a certain amount of time.

Once you’ve got the controls and tactics down pat, it’s time to create your own player and start a career. My first player, the aptly named ‘Tom O,’ began life as a fairly poor performer. The goal was to turn him into a world-beating baseline player – fairly weak at the net and not a brilliant server, but excellent at returning and completely dominant in longer rallies.

Where 2K Czech has really got things right is in the player stats, with a general levelling cap meaning you can never max out everything. You’re forced to create a player who is either average across the board or excellent in certain areas. You earn XP every time you use your custom player, which you can then use to level up in areas relating to serve and volley, alongside offensive baseline play and defensive baseline play.

Becoming good at Top Spin 4 isn’t just about learning timing, but also how to best approach certain opponents. It’s pointless trying to out hit Nadal, for example, while someone like Becker or Sampras (numerous legends are included in the roster) will clean up if you let them control the net. Just as your player has weaknesses, the AI opponents (including many well-known male and female faces such as Murray, Federer, Nadal, Serena Williams, and Anna Ivanovic) equally have their own specialities.

You can take your guy or girl on tour through all the big (and small) tournaments, but that’s essentially it for the Career mode. If pure tennis is what you’re after, look no further, but there’s very little in the way of flash and bravado here, which does make Top Spin 4 feel a little dour.

At each stage of your career you can choose to take part in a warm-up event and then a tournament. The warm-up event can be a sparring match against an AI opponent, with certain goals rewarding you with more XP, or a special event that brings with it extra XP.

As you progress with your player you’ll unlock coaches (bronze, silver and gold varieties), which when activated give you stat and XP bonuses. Complete objectives set by each and you’ll unlock more of their bonuses, but switch to a new coach and you’ll only have access to that new set of bonuses.

Aside from a few odd moments when player faces look a little lifeless, Top Spin 4 is a brilliant looking game. Although three of the four major tournaments are officially licensed there’s no Wimbledon, which is a shame considering it’s considered the most prestigious event in the tennis calendar. Still, players are modelled well, animations are superb and everything runs at a beautifully smooth 60 frames per second.

If you don’t have anyone to play with on the same console you’re going to want to make use of the online multiplayer features. Top Spin 4 features numerous game modes that limit the players you can play with. If you want to play as your custom player you can do so in an Online World Tour or Exhibition, while the included pros can be used in a separate mode complete with unique leaderboard and a meta-like game that works out which Pro is the best based on online performances.

Top Spin 4 isn’t flashy and doesn’t come with any gimmicks, but it’s an incredibly competent and in-depth tennis sim that the sport’s fans would be foolish to pass up. It’s more accessible than the previous entry and includes the necessary online functionality to keep you playing for months.

Top Spin 4 isn't flashy and doesn't come with any gimmicks, but it's an incredibly competent and in-depth tennis sim that the sport's fans would be foolish to pass up.
8 Good online functionality Lots to learn Smooth frame rate A little uninspiring

Top Spin 4 brings the competitive action of tennis to life.

Top Spin 4 brings the competitive action of tennis to life.