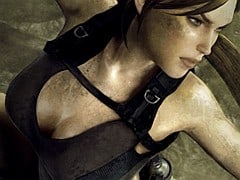 Lara Croft is one of a dying breed of video game icons from the mid 90s. She was once seen as a pin-up for PlayStation and helped convince thousands (if not millions) of gamers that they needed to ditch their 16-bit consoles in favour of a shinier, more powerful 32-bit monster. Needless to say, the rest is history, with Tomb Raider now standing as one of the most popular video game series ever created. After the critically mauled Tomb Raider: Angel of Darkness, developer Crystal Dynamics took the reigns and has returned Lara to her glory days. With Underworld being the most ambitious title in the series to date, is it three for three for Lara’s saviours?

Underworld centres on Lara’s quest for Thor’s hammer, the Norse god’s hugely powerful weapon. After discovering proof of the Norse underworld at the bottom of the Mediterranean sea, Lara starts an adventure that takes her all over the world and into her own family history. It’s a truly epic journey (certainly one of the longer games to arrive in this busy release period), with the game offering the kind of adventuring Tomb Raider made its name from and some solid combat thrown in for good measure.

Anyone who has played either Legend or Anniversary will know roughly what to expect in terms of core gameplay. Lara is as nimble as ever, jumping from perilous ledge to crumbling platform as if she’s still in her late teens, swinging from poles, balancing on beams and abseiling down walls without a second thought. It’s all part of the job, and for the most part comes effortlessly. Lara seems a better mover all-round, and can now handily wall jump between two vertical surfaces – something you should bear in mind when a certain platform or pole seems tantalisingly out of reach.

Also new is Lara’s ability to free-climb. It’s not quite as amazing as it sounds (you can’t climb up anything), but certain walls have a series of hand holds on them, allowing you to climb without leaping from one ledge to another. This adds a sense of realism to your exploration, at least visually, and again is something you need to be aware of. Just as the grappling hook, appearing in a third Tomb Raider, is only now becoming a tool you expect to use and are always aware of, you’ll likely miss a few of these free-climb areas at first as they don’t have the trademark Tomb Raider ledge appearance we’ve become so accustomed to.

Developer Crystal Dynamics has really gone to town with massive caves and underground worlds to explore. At times you’ll enter an area with a lever, only to return to it hours later after finally managing to retrieve whatever missing artefact was needed to get it working. You’ll walk into rooms so large you won’t know where to begin, with part of the fun coming from figuring out what you need to do to get to the various key locations. There are puzzles in Underworld (with some requiring a fair amount of thought, the use of blocks, your grappling hook and cogs, to hint at just a few), but successfully jumping, shimmying, sliding, climbing and wall jumping your way to platforms often just out of reach is the real challenge.

At times you’ll think you’ve done all you can, explored every nook and cranny, and leapt to your death numerous times in the search of that platform that might lead you to safety, only to catch a glimpse of a half-broken ledge on the hidden side of a pillar. With a potential way out spotted, you just have to navigate around the environment (easier said than done) and then make your way to safety. It’s worth pointing out that you’ll encounter a few annoying bugs (notably one that causes Lara to become immobile for a short time) and you’ll occasionally accidentally leap off a ledge in the wrong direction – something that the camera often tries to make worse by refusing to allow you to get the desired shot of the action. Still, for the most part you’ll be enjoying what are some of the most well designed levels we’ve seen in the Tomb Raider series.

Combat thankfully plays second fiddle to exploration. It’s by no means bad, with Lara able to target and even focus shoot enemies in the head for instant kills, but she just doesn’t seem at home doing somersaults while firing pistols. Also making a reappearance is the bike from Legend. Thankfully it handles far better here and is only used as a means to get from location to location rather than having levels dedicated to it. Later levels have an almost free-roaming feel to them, with Lara able to bike around the environment, leaving it behind when entering buildings. It’s a nice touch and gives the game a great sense of scale.

A much talked about feature is the tips system, which dishes out a clue or a much more blatant piece of advice at the touch of a button. In our experience these tips have mixed rates of success, with our struggles often coming not because we didn’t know what needed to be done, but how we had to do it. For example, one level sees you having to find two jaguar heads. Having found one we searched high and low for the second, but simply couldn’t find it. The tips system told us that we needed to find the two jaguar heads and place them on two dials at either ends of a massive room. Not much help really. It turned out that we’d managed to miss the first jaguar head which was located at the start of the level.

Something else we found to be a missed opportunity is the sonar map. Accessed from your PDA, this nifty gadget gives you a 3D map of the surrounding area, but we couldn’t find a good use for it. Something you might have been expecting is the ability to take pictures and share them with friends (perhaps even showing them the location of hidden gems), but this sadly didn’t make it in.

We’ve had some great looking games over the past year or so, and Underworld is on par with some of the best. Lara herself looks superb, the environments are massive, the detail is hugely impressive and the lighting is wonderful. Comparisons are bound to be made to Naughty Dog’s PS3 exclusive Uncharted, and from a visual stand point Underworld certainly doesn’t come off as second best. If anything, Lara’s latest offers a more diverse range of environments to play in. Even the underwater sections look great (and thankfully control well too).

Much of the wow factor comes from the colossal structures you’ll come across and the many massive statues that adorn rooms. If there’s a disappointment it’s the lack of many epic monsters. The Kraken that has been seen in the pre-release media is a sight to behold and a highlight from the first few hours of the game, but apart from that you’ll mainly come across creatures that are large for their species (big spiders and lizards mainly) rather than being giants. It’s really only a slight niggle, with the levels themselves providing more than enough spectacle on their own.

Lara is once again voiced perfectly by the lovely Keeley Hawes, and the supporting cast doesn’t do a bad job either, with many familiar characters returning. We’d go as far as to say the storytelling here is the best it’s been in the series to date, and the ending is both satisfying and open for further games in the series. Xbox 360 owners get Achievements, making gem collecting all the more worthwhile, but sadly PS3 owners don’t get trophies – hopefully this is something developer Crystal Dynamics can add at a later date.

Tomb Raider: Underworld is a visually stunning, epic adventure that continues Crystal Dynamics’ excellent run. We reckon it’s the best completely original Tomb Raider (Anniversary was, of course, a remake) we’ve had in years, and is only let down by the odd control quirk and camera issue. If you’re looking for a game heavy on exploration instead of gun-play and don’t mind looking at a finely toned arse for 12 or more hours, Underworld comes highly recommended.

If you're looking for a game heavy on exploration instead of gun-play and don't mind looking at a finely toned arse for 12 or more hours, Underworld comes highly recommended.
8 Emphasis on exploring Looks stunning Isn't over in six hours Some control and camera quirks