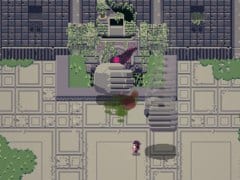 There were times when I seriously didn’t like Titan Souls. I’d drop the controller onto my desk, my character’s recent death causing the pad to vibrate violently and send a disconcerting rumble of plastic on varnished wood through the office. Each time I petulantly threw my 360 pad down I’d mentally given up, even if for just one second. Sometimes, after large chunks of time in which I accomplished nothing but death, I’d get up, walk around a bit, make a coffee – from time to time even wish I’d given the game to someone else to review. Yet, right now, I’d easily recommend it to others. Right now I think Titan Souls is pretty great.

At its core it’s an isometric action game, featuring a series of boss battles, found within a relatively small game world and spread over a handful of different themed zones. You have a single arrow, the ability to fire it, and draw it back like a Jedi, a roll move and a sprint. With those abilities, as basic as they are, you must defeat these bosses. There’s nothing to get in your way between fights other than short distances and the odd puzzle, so the game really boils down to how good you are at using your skills to kill.

One thing is certain: you’ll die. Unless you play games at another level to most humans, it’s more or less impossible to kill these foes on your first try. With their size, movement and attacks all completely unknown until the moment you first see them, it’s incredibly easy to meet your maker 10 or more times before you have any clue about what’s going on. But you’ll gradually work it out, a grin will form (even if it’s an internal grin of smugness) and then you’ll die again. Despite knowing what you’re meant to do, actually doing it can be extremely tough.

High difficulty breeds jubilation, though, so when you do finally nail a boss there’s a very real chance that you’ll shout out – partly in joy, partly to hurl abuse at the fallen enemy. I’m not proud, but I gave the middle finger to one particularly arsey boss. Key to this glorious, emotional reaction to combat is the incredibly fine margin between winning and losing. Every boss in the game is killed by a single arrow to the weak spot. You will have to expose that weakness using a variety of methods or tricks, but the actual kill is one shot. Miss and you’ll usually find yourself eating dirt in a pile of blood, swears erupting from your mouth as you kick yourself for firing just wide or slightly too late.

Frustration rears its head, for sure, but the thrill of walking into a boss cave, rolling twice then smashing an arrow into the monster’s weak spot is incredible. It might have taken you an hour to get that good, but those triumphant 15 seconds were worth it. Things could have been streamlined slightly, though, potentially removing some of the (partly necessary) annoyance. Even though an extremely minor issue, walking for five or 10 seconds to re-fight a boss you just died trying to kill for the 30th time does start to grate. An instant retry option might have eliminated this, even it meant placing save points inside the arenas.

Outside of the boss battles there’s little else of note in terms of gameplay. The world looks lovely, drawn in a style that’s hard not to appreciate even if you usually crave high polygon worlds and fancy graphical effects, but exploration feels limited. You find new areas and bosses but I wouldn’t call it an adventure. Whereas Shadow of the Colossus, a game this certainly riffs on, presents what feels like an epic adventure, moving between bosses in Titan Souls at times more closely resembles a prettified map from Super Mario World.

This is a game that has clearly been designed with at least one eye on speed runs. With an optional on-screen timer and bosses that can hit the ground in seconds, I expect Titan Souls will be popular in those circles, but I’d have liked to have seen more before the credits rolled. If you’re more proficient at games than me you could very well reach the end in less than a day’s play. You can mop up missed encounters after the final boss, and there’s bound to be some secrets hidden within the stupidly hard difficulty modes that are unlocked (no rolling or running! What is this madness!) but I just felt the end came about a little too soon.

Titan Souls is one of the most interesting titles I’ve played this year. For a game built entirely on boss encounters, these had to be top quality and they are. It’s refreshing to be given all your skills from the start and then have huge demands placed on you to become highly skilled, using your knowledge to defeat a selection of wonderfully designed enemies. Had the adventure not felt so slight, the small team at Acid Nerve would have had an indie classic on its hands. For me it falls just short, but remains a unique and memorable experience.

Titan Souls is one of the most interesting titles I've played this year. Some issues aside, this is a unique and memorable experience.
8 Brilliant boss designs Tight controls Tough but rewarding No real adventure