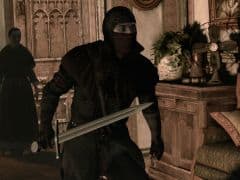 Plundering the past is always a risky move. You’ll rarely find an audience who doesn’t wax lyrical about past gaming glories and clamour for a modern remake, but that same audience tends to take a lot more convincing to actually part with their money. Give them more of the same and you’re in danger of accusations of laziness. Change too much, and there’ll be hell to pay.

Eidos Montreal’s Thief sits somewhere between those two camps. This is a handsome offering, with fluid first-person stealth through a gorgeously-lit approximation of an 19th century English city called, imaginatively, The City. It’s a gloomy and restrictive pseudo open-world, like Dishonored’s Dunwall without the character, and is largely segregated into corridors and alleyways, shuffling hooded antihero Garrett between missions.

The missions – thefts, basically – are where the game harkens back to its roots, offering greater scope for varied approaches as you creep through purpose-built levels, searching for whichever glittering target you’ve been assigned. Almost every room offers a limited stealth-puzzle of sorts, with a flawless solution masked by the more obvious creep-up-and-whack possibilities that sneaky players have been doing since, well, the original Thief.

And therein lies the game’s real issue. Whereas Dishonored (which does feel like Thief’s more charismatic and popular older brother) and Mark of the Ninja have toyed with established hide-and-seek mechanics and shown that there are still ideas to mine in this genre, Thief just sticks to the shadows. You might chuck a bottle to distract someone or hide in a cupboard, but the inescapable feeling of déjà vu only hurts its cause.

To offset this, Eidos Montreal has tried to turn Thief into a kind of Call Of Snoop-y, thrusting set-pieces and copious cut-scenes into the action. In doing so, the developers have missed both audiences – it’s too dull for COD heads and too restrictive for the PC-bred brotherhood that loved it in the first place.

A next-gen revival of the stealth-action series.

A next-gen revival of the stealth-action series.