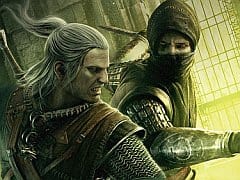 After I scored the PC version 9/10 last year, CD Projekt RED has taken the Witcher 2 to Xbox 360. The Polish publisher originally tested Microsoft’s waters during the development of the now-cancelled The Witcher: Rise of the White Wolf. But the real question has never been whether CD Projekt RED could bring their games to console, but how to transition a title so heavily intertwined with PC aficionados.

For all intents and purposes, The Witcher 2 isn’t built to mimic the action-RPGs that have whet the appetite of the console market so far. Despite having been developed with a controller in mind from the start, the game never embraced the action-based twitchiness of its fantasy cousin Dragon Age 2. Even when it seems to allude to other hack and slash titles by sending out waves of enemies for protagonist Geralt to slaughter, it opts for a less beaten path than many will be used to.

A Witcher is tough, but he’s not at his prime fighting state until he takes time to prepare for combat, which involves the brewing, meditating, or riffling through various things in your inventory to apply to Geralt. This is one of the things that make up the odd tempo of this world. Similarly the game doesn’t reward speediness, or even cater to it entirely – rolls and dodges themselves are slower than anything comparable in DA and even Skyrim, and have their own particular, delayed cadence despite the fact that these defensive measures are crucial for success.

It’s something that feels particularly odd against the backdrop of fantasy RPGs that have been available on Xbox 360 in the last few years, but its steadfastness as a hardcore role-playing game sets it apart from every one of its competitors.

As CD Projekt had proved on PC, The Witcher 2 is a difficult, sometimes ruthless game that embraces the core aspects of fantasy. As I expanded on in our PC review, it’s a joyfully plausible fantasy setting. Night and day cycles, along with the occasional torrential rain pour, affect the environment and the citizens of the game, who themselves start to dejectedly sigh at the first sign of rain or call out to you for help when being attacked as part of Witcher 2’s humans-versus-non-human race war subplot.

It stands apart from its PC sibling too, thanks to CD Projekt’s more-bang-for-your-buck development philosophy. The new Enhanced edition justifies the existence of Witcher 2 on console, providing a slightly renewed take of the game with the inclusion of roughly four hours of new material slotted in, added cutscenes, introductory features for new players, alongside a number of additions from Version 2.0 of the original PC title that will be recognised by anyone who played the game after its release late last year.

That also includes new characters, who pop up by the third and final chapter of the game in side-quests. The studio has been insisting the game is more adaptation than port, pointing to new content like a side-story about a witness to the disappearance of the heir to the throne, and a quest-line that has you escort her to a quiet escape, as reasons to differentiate this from the PC twin.

The game’s control system has been overhauled too, reducing a keyboard to 12 buttons. But the new control system also creates one of the biggest improvements to one of the earlier problems on PC where interaction hotspots on items were too small, forcing users to awkwardly mouse over doors and loot until the item was recognised. Now these are simply non-issues. Items can be picked up all at once when dropped from enemy corpses, with the old awkwardness replaced by the wondrously mind-numbing simplicity of hitting a face button.

More welcome than either of those are a series of additional cutscenes that have been included to spell out the direct causal effect of your choices in the game. Often options that allow you to manipulate the storyline in games lead toward cloudy conclusions, in which your actual role in the series of events is unclear. Now new cutscenes have been added in-between the chapters to show exactly how your choices play out and their significance to the overall story. It’s a clarity that’s often missing within choice-driven RPGs, and which has been perfected in this game.

While it runs on what would have been medium graphics on the PC version, this is a very small cross to bear for a game that brings itself to a mainstream audience – a place it deserves to be. While not necessarily as big a name as the products of BioWare or Bethesda, The Witcher 2 is still one of the most interesting developments in RPGs within the last ten years, and with a combination of additional content and cutscenes its Enhanced Edition on Xbox 360 is one of the most lovingly crafted fan-services you’ll find.

With a combination of additional content and cutscenes The Witcher 2 on Xbox 360 is one of the most lovingly crafted fan-services you'll find.
9 Fixes numerous issues with the PC original Great port Extra content is excellent Might be a little slow for some