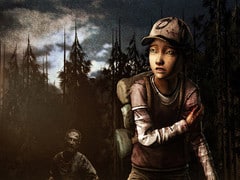 The Walking Dead: Season Two, Episode One – All That Remains Review

It’s good to see Clementine again. It’s been a while since the apocalypse started, and she’s taller, tougher, and a little more aware than I remember her being; I was particularly impressed to be given the option to pull a ‘sad face’ at one point during this first episode to get something that she needed. It showed a new side to Clem that I wasn’t expecting, and I was happy to see that The Walking Dead can still keep me on my toes.

In contrast, the final moments of All That Remains did feel predictable, if only because we all know the format rather well by now. Other than that, however, Telltale seemed very keen to show it still has plenty of teeth. One scene has you stitching a wound on Clementine’s arm: let’s just say it’s not for the faint-hearted among you.

As for the supporting cast, I struggled to really care about the new characters (at least those with two legs) and that’s largely because I haven’t spent a whole lot of time with them yet. The first season’s opening episode had very similar teething problems, and I’m hopeful that I’ll soon change my mind and grow to like/hate my latest friends/enemies. There’s certainly some interesting stories being hinted at here, regardless.

It’s worth noting that your past decisions from Season One and 400 Days shape your experience in some form, but these changes don’t appear to be dramatic. In fact, if you’ve switched platforms or lost your original save file, the game will randomly generate those choices for you, not asking for your input at all. This is disappointing, and carries with it the suggestion that your individual decisions from those past games will not prove overly significant throughout Season Two. I hope this isn’t the case.

Everything considered however, All That Remains is a strong return for The Walking Dead, and proves that Clementine was a fantastic choice for this season’s protagonist.

As openers go, this is a strong debut to the second season, with Clementine a superb choice of protagonist.
8 A few lovely references to past episodes. Clementine rocks it. Telltale still know how to make you squirm. The ending didn't need to follow last season's format so religiously.

The Walking Dead: Season Two, Episode One – All That Remains

Continues the story of Clementine, a young girl orphaned by the undead…

The Walking Dead: Season Two, Episode One – All That Remains

Continues the story of Clementine, a young girl orphaned by the undead…