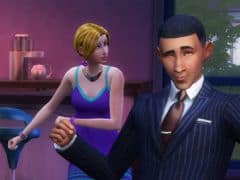 Pools, like garden flamingos, are an almost iconic part of The Sims franchise, but they’re not essential to it. The Sims 4, which famously scraps a number of things from its predecessors, has bigger problems.

The lack of a seamless open world a la The Sims 3 is the most painful omission. Your Sims can’t go next door without subjecting you to a loading screen. There are interesting looking places which can be seen in the distance, as you tend to chores and bladder management, that you cannot visit. You can frequent bars and parks, and interact with other neighbourhood sims that cross your path, but everything you do outside of your house is a separate instance, walled off by the whirring of hard disks and an absurdly cheerful progress-bar. This feels like a regression, and so fundamental to the design that it has little hope of being “fixed” by patching, DLCs or the clever modding community.

However, the focus of The Sims 4 is not on its world, but on the Sims themselves: their personalities, their aspirations and their interactions with each other. On this front, it is deeply impressive – these are the most convincing little computer people the series has ever produced. The attributes you give to them during the extensive character creation phase generate regular “moodlets” based on their emotional makeup and various environmental factors, and there’s probably a lot of maths involved, or something, but whatever goes on at a code level leads to some incredibly convincing people simulation.

The way they interact with each other, the way they can eat, watch TV and chat about underpants or spaceships at the same time is a marvellous technical achievement that puts the rest of the game, with its missing pools and open worlds, into context. I wish we could have it all in the same package – perhaps The Sims 5 will – but for now, I’m happily and frankly unexpectedly willing to trade those bells and whistles for characters that feel, well, real.

The feature list is bare, but the Sims themselves are incredible.
8 Impressive people-sim. As fun and addictive as ever. Some irritating (if minor) bugs. Missing features feel like a step backwards.