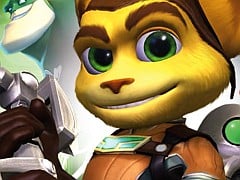 The Ratchet & Clank Trilogy is here to remind us the present is far more complicated than the past. Too often it feels that we’re done with the days when gamers found contentment running and jumping around with a wrench, bashing crates for the eternally satisfying zing that booms from your speakers upon acquisition of another shiny bolt. I worry that we’ve simply lost these moments of simple, uninterrupted fun.

Still, we’ve at least got an HD remaster of the original trilogy to tickle our nostalgia glands: the original Ratchet & Clank, Ratchet & Clank 2: Locked and Loaded, and Ratchet & Clank 3: Up Your Arsenal are all included, and across the three games there’s an impressive amount of content on show. All three are humorous and charming, with a likeable cast of zany characters making up a mix of good, bad, and outright mad. Choose to progress through each game in order and you’ll witness the evolution of Ratchet’s relationship with his monotone robot partner Clank, while saving worlds from nefarious villains one bolt at a time.

These PlayStation 2 classics have aged remarkably well, and it’s almost impossible to tell, even at the most scrutinising glance, that the first game is now a hugely respectable 10 years old. Colour vibrancy and aesthetic variety are key to the games, and the cartoonish style helps them look timeless. Sadly the cutscenes aren’t as impressive, often abruptly switching from 16:9 to 4:3 and losing the crisp clarity that makes the rest of the game so attractive. It’s a small problem but a very noticeable one when it’s happening. 3D support is also featured, but at the expense of a silky 60fps and 1080p resolution, which, in my opinion, defeats the point of owning a HD collection.

Each game is made up of varying planets, of different climates and environments, with most environments featuring large open areas – which was still particularly unique for the platform genre a decade ago, and the freedom to run around all this space lends a charming carefree feel to the games themselves. There’s no unnecessary fat crowding the experience, though, and only a sometimes-irritating camera manages to disrupt the smooth gameplay.

Compared to the later titles the first game feels streamlined but also unadventurous and limited, with the games picking up variety as they progress through the series. Set piece missions deviate from the standard template of fighting enemies and collecting bolts, fending off feelings of over-familiarity.

Ratchet’s unique set of weapons also keeps the potentially one-note vibe of combat at bay. Every tool of destruction is an absolute blast to put into use, and they each bring an irresistible charm to the subtle art of blowing up your enemies. The thirst for new weapons burrows deep into your subconscious, compelling you to collect bolts by the thousands to spend on whizzy upgrades and new items.

However, whilst pretty visuals reinvigorate Ratchet into modern life, and weapons like the Sheepinator keep combat fun and exciting, a few issues show the series’ true age. The problems aren’t as noticeable in the two later games, where combat has been bolstered and refined, purchasable weapon upgrades bring an RPG-lite vibe to progression, and the controls are much more responsive, but the original often stumbles. It’s clunky, provides little challenge and you won’t care to look back once you start playing its successors.

If you can ignore these issues, as well as that dodgy camera, then there’s no reason why you shouldn’t get up off your chair, run to the shops with your arms flailing in the air and buy this collection right now. It’s more than just a nostalgia trip, mind; this is a trilogy that plays great, looks even better and gels together more seamlessly than any other HD collection I’ve played to date.

This is a trilogy that plays great, looks even better and gels together more seamlessly than any other HD collection I've played to date.
8 Compulsive bolt collecting Looks fantastic Barmy weapons are great fun to use Occasionally shows its age

Two PlayStation heroes are back to relive their first three adventures, remastered…

Two PlayStation heroes are back to relive their first three adventures, remastered…