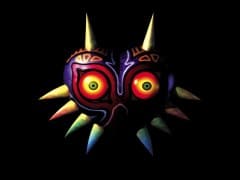 It’s time for Majora’s Mask to step out of Ocarina of Time’s shadow. Comfortably the most innovative and arguably the best of the Zelda series, the condensed mission structure and three-day cycle makes it a perfect fit for the 3DS, and the visual upgrade is on par with Ocarina of Time’s remaster. It’s been a long time coming, but it has most certainly also been worth the wait. (The moon is still terrifying, though.)

Majora’s Mask represents a break in series formula. Instead of traversing a vast open world in search of new items, quests and people, it features a central hub in the form of Clock Town. Four locations occupy the outskirts, hosting the game’s dungeons. Unlike Ocarina of Time, it’s easy to know where to head next, thanks to the smaller landscape. Sidequests and daily events are tracked via a handy notebook, and Tingle is always nearby selling the latest maps.

While other Zelda games give you the freedom to find your way at whatever leisurely pace you desire, here there’s the small matter of the world ending after three days, thanks to a horrific-looking moon encroaching on the city. Whatever you hope to achieve must be completed in this very narrow time frame, before playing the Song of Time to revert to day one and reset the apocalypse, after which all your ammo and rupees are lost.

The three-day mechanic, and world which reacts to it, are perfect for the portable. Each cycle lasts a couple of hours, and choosing to dedicate a few loops to side missions never comes at the expense of the main story. The smaller, more tightly-knit world means you’re never taken too far away from the route to the next dungeon, and you won’t forget what you’re doing thanks to Tatl’s (think Majora’s Mask’s Navi, though much less annoying) reminders upon each return to day one. The Sheikah Stones also make a return from Ocarina of Time 3D, so those really stuck can crawl in and find out where to go next.

That said, the time limit really does create a sense of pressure when it comes to dungeons. The loop basically becomes speedrun practice, and trying to overcome the boss with only minutes left on the clock can be equal parts thrilling and stressful. Failing to complete a dungeon before reaching the final boss means having to go through the process again, a massive headache and inconvenience. But making the boss means that you can use a teleporter at the dungeon’s entrance upon returning to skip the traversal and go straight to the finale, which makes things a little easier.

The addition of masks adds something unseen in the rest of the series, giving Link the ability to become a smorgasbord of different characters at the don of a face. A Goron mask grants super strength that can break boulders with a single punch. The Zora mask allows you to swim the depths of the ocean and also walk along the bottom of the water, taking on whatever lies below. The ability to change Link yields great variety. Switching between masks to complete the objectives that lay before you is something that continues to keep things fresh and, thanks to the second screen, doesn’t become laborious scrolling through pause menus like on N64. At times it makes you forget how far an item’s use extends. I often found myself at a loss, not realising a ledge was waiting for me to grapple to, Link too busy doing his best ’90s Jim Carrey impression to notice.

The visual bump Nintendo has delivered is very similar to the upgrade given to Ocarina of Time. It’s easy to forget how much the original releases looked like a Friday night kebab on Saturday morning, so if you’re initially underwhelmed by the visual overhaul, head over to YouTube for a quick look at the N64 version. While the visuals look far better than they did nearly 15 years ago, performance-wise there are still some issues, with occasional frame rate drops, especially when the 3D is turned on. This doesn’t even have to be during intense battles, either, often occurring during the smashing of multiple pots or when jumping between ledges.

Majora’s Mask is a superb game. Many hold Ocarina of Time as the pinnacle of the franchise, one of the first games to create a true sense of adventure in a world where every inch of the environment feels wonderfully realised in three dimensions. But Majora’s Mask does so much of what OoT did, only better. The game feels perfectly designed for a handheld thanks to its time and mission structure, meaning you can speed through a loop in just a few hours on your journeys. Majora’s Mask is brilliant, and disappointingly still the most innovative Zelda game ever released. For those looking to get lost in an ever-so-creepy adventure, Clock Town is the place to be.

Like the sound of Majora’s Mask? Go buy the game from Amazon.co.uk.

ABXY Moon (sorry)
9 Same great visual overhaul as OoT. So much to do. Mission structure and time scale perfectly suited to portable. Occasional framerate drops, more so with 3D on.