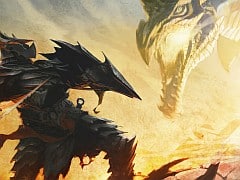 Because we at VideoGamer.com care about our audience, we’d like to offer anyone planning to play Elder Scrolls V: Skyrim a couple of pieces of advice. First off, if you have any long term commitments like say, a job or friends or a significant other, we suggest you ring them to make your excuses now – you don’t want to get sacked or dumped over a video game, and letting your friends think you’ve died or been kidnapped due to lack of communication is just plain rude. Furthermore, it might be worth making sure that your gas and electricity bills have been paid, and that you have enough provisions to last you until spring. You’re going to need time for Skyrim and lots of it.

To say Skyrim is vast is to make a chronic understatement. The sheer scale and size of the game’s environment alone is absolutely mind-boggling and it’s all augmented by a staggering amount of variety. Every town, every dungeon, every temple and every location has been created with a loving care and a fastidious attention to detail, and all of them boast a personality and an atmosphere of their own.

This level of range allows Skyrim to weave its first intoxicating spell of immersion. Players will soon stop seeing Skyrim as a game and become lost in its gargantuan landscape. They’ll visit the cracked black-stone fortress of Windhelm, the blizzard-swept desolation of Winterholm, the sun-kissed settlement of Whiterun, and traverse rolling hills, snow-packed peaks and lush forests in between. Then they’ll stare up at the clock and realise they could’ve finished off a couple of novels in the same time it took to do all that.

It isn’t just the immense size of Tamriel as a place that gives it its ability to swallow lives whole. Bethesda has packed every inch of its game with content for the player to consume. Before the player is even allowed to begin exploring they’re tasked with creating their character, and the levels of customisation on offer are so huge that the player could while away a couple of hours deciding on the exact look and feel of their avatar in the game. Skyrim also boasts over a hundred locations, a huge legion of characters and a lengthy list of quests to complete. The list of activities available is also pretty sumptuous; players can spend hours crafting weapons, mixing potions, enchanting items or simply reading the ton of books they’ll find scattered throughout the game. Underneath it all there’s a rather decent plot trundling along, involving a civil war in Skyrim, the return of some dragons believed to be extinct and the end of the world. You know, the usual epic fantasy stuff.

The player’s role in this is as the last remaining Doväkiin, or Dragonborn to you. Not only does this set them up as the last hope of mankind, it also allows them to absorb the souls of any slain dragons. These in turn are used to unlock ‘shouts’, a list of abilities that range from lightning-quick movement, to a concussive blast that sends opponents flying, to the power to encase foes in a block of ice. Shouts have to be acquired and the player does this by seeking out runes etched into the walls of the many dungeons and subterranean caverns dotted around Skyrim. Each shout has three parts, becoming more powerful as more parts are found. It’s worth spending the time to bolster up the Dragonborn abilities as they provide a much-needed edge in combat.

The rest of the combat system allows players to dual-wield weapons and magical attacks – provided of course, their weapon of choice doesn’t require two hands to swing. Every successful attack earns XP which can be used to level up, and your character will also become more proficient in the types of weapons and magic they use the most in battle. When levelling up, the player is awarded a choice of topping up their health, magic or stamina, and is given a talent point they can use to unlock a perk in the talent tree of their choice.

Talent perks can only be unlocked if the player has reached a requisite proficiency level with in a type of attack or skill. So, for example, if your character fights most battles with a two-handed battleaxe, their two-handed proficiency will rise faster than their defensive or one-handed attack skills. The talents aren’t limited to combat, though; skills such as blacksmithing, alchemy, lockpicking, sneaking and bartering are also available for a boost. Once again, the more players use these skills, the more perks become available for unlocking.

The talent-trees themselves are represented by swirling star constellations in the heavens above Skyrim and are both beautiful to look at and easy to navigate. That latter quality is, fortunately, shared by all of the game’s menus and while it may sound like a bulletpoint on a factsheet to praise the menu system, Bethesda really do deserve some credit for its work in this respect. Given the volume of abilities, attacks and information players need to have readily available to them in the game, a poor menu system could have easily turned Skyrim into a chore.

That certainly doesn’t happen here; players can easily flip between their inventory, magic abilities, talent trees and their map of the world by simply hitting the B button (in the Xbox 360 version tested) and flicking the right stick. They can hotkey any item or magical ability by highlighting it with the Y button, and mapping it to the D-Pad. They can also choose any perspective to play the game from; clicking in the right thumbstick switches the camera from first to third-person view, and by holding in the right stick and panning back with the left, players can shift their perspective to as close or as far away as they like.

If Skyrim has one weak spot, it’s the fact that occasionally the odd bug in the gameplay raises its ugly head. Players may find their heroic efforts hit a snag when they become stuck against a piece of scenery, or prompted to talk to a character that remains oblivious to all of their prodding. These aren’t deal-breakers, necessarily, and to an extent they’re to be expected from a game this size. Most of them can be avoided by loading a previous save, but there were one or two instances in our play-through, which threatened to hold up my progression.

In one mission, where my task was to become wedded to the in-game love of my life, I was informed that I’d failed to get married after being jilted at the altar. When I tried to get hitched a second time, my bride-to-be arrived at the church with no eyes in her head, making her wedding vows seem more than a tad sinister. There were also a couple of instances where the game crashed completely, requiring a console reboot. With all of this in mind, we urge you to remember that this is a Bethesda Game and while auto-saves occur between entering and exiting new environments, players risk being hurled back into early stages of the game if they don’t save well and save often.

In the light of the game’s impressive strengths, however, all of this criticism feels like unnecessary nitpicking. Skyrim is easily one of the strongest and best examples of the Western RPG, and it further establishes Bethesda’s reputation as one of the most talented and creative forces in the gaming industry. Moreover, it offers players a world so vast they could easily become lost in it, and so beautiful they may never wish to return from it.

See you all next spring…

Skyrim is easily one of the strongest and best examples of the Western RPG, and it further establishes Bethesda's reputation as one of the most talented and creative forces in the gaming industry.
9 Huge amount of quests and activities Well-written and compelling narrative Vast deep and detailed world Occasionally buggy