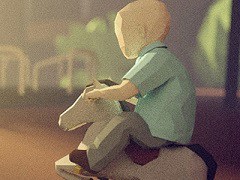 It’s an odd sort of beast, That Dragon, Cancer (see, that works on two levels). It’s certainly a very personal game, though it didn’t make me moist-eyed and emotional like it apparently did others, possibly because I’m a monster that doesn’t have measurable feelings. This may also be why, though the representation of a family dealing with the protracted illness of a child is well done on many levels, it wasn’t as interesting to me as the exploration of faith that was inextricably woven into it.

The real life Ryan and Amy Green are on the record as people of tremendous religious belief, as are the Ryan and Amy of That Dragon, Cancer, but the game shows Ryan in particular having trouble reconciling this belief with Joel’s illness. Amy is always optimistic and has faith that Joel would be healed, whilst Ryan struggles to have that kind of certainty; in one set piece you witness them arguing about this as they float on a wide ocean scattered with little islands of their life. Amy tries to convince Ryan to get in the boat with her and Joel or he’ll drown, whereas Ryan sees her as adrift on her faith without direction.

Ryan never truly loses his faith at any point in the game, but he does rediscover faith in his faith, as it were, in part of the game where Ryan is trying to settle Joel to sleep but can’t. Each action you take briefly calms him, only for his crying to recommence at a louder, more desperate level. It’s one of the most striking sections of the game, as you’re unable to leave the room and escape from Joel’s anguish.

Throughout the game the Greens are able to find comfort in their Christian beliefs, with the inner monologue of Ryan’s thoughts and excerpts from what is presumably Amy’s diary giving you insight into some of their most private moments, though your role as the player is never clearly defined. Sometimes you’re Ryan, sometimes you’re hearing his thoughts, sometimes you’re observing the family and quietly following them. It’s easy to make the assumption that this is representative of God always being with them, but you’re also startlingly powerless as a player (especially when compared to the agency of player characters in traditional games) and have no control over Joel’s fate, just as the Green’s had none.

The name That Dragon, Cancer comes from a bedtime story Ryan and Amy tell to their other children to explain their brother’s illness. Joel is a brave knight fighting the dragon, cancer, aided by grace and by God, who, the Greens assure their sons, will go in to bat for Joel if he needs it. At the same time they explain that in some cases grace can be God granting you peace with death after you have fought so hard and long – and Joel has been fighting for a long time.

You wonder how those without religion to support them cope with this kind of no-win situation, and whether this faith made the ordeal easier or, in a roundabout way, harder, since the Greens’ had to weather more than one crisis.The exploration is gentle but raw, and presents the concept in a way that makes it understandable to someone like me (who has a noted absence of said faith).

This gentle simplicity is mirrored by the imagery of the game, which uses basic colours and forms to paint the different areas you progress through, in line with the progression of Joel’s treatment: a playground before they knew he was sick; a hospital when he was; a sea after they were told it was terminal; a huge vaulted church when they needed a miracle. In all these places it is either night time or evening, with long light and shadows. There’s never any sense of a new day beginning, just endings, over and over again: we made it through another one.

The cancer is ever-present as if to underscore this, as black trees or spiky masses that pulse in time with a heartbeat, lest we forget that cancer is actually a part of the patient. Joel himself is always shown being happy (laughing, playing, floating through a starry sky on balloons that resemble white blood cells). You hear moments of unhappiness, but they’re always disembodied, as if, though the cancer was part of him, the pain he went through wasn’t.

You navigate Joel’s life by pointing and clicking, moving slowly and deliberately along. It’s very occasionally broken up with small sections in the style of traditional mini-games, like a side scrolling arcade game or a racetrack round the hospital ward to collect procedures and medicine. Mostly you’re just interacting, discovering snatches of conversation and phone messages, uncovering more of what the family went through.

It’s not an action game, or really even a point and click adventure; it’s the telling of a very touching, religious story. It’s not for those without patience (especially during the times when the cursor randomly disappears and you’re left clicking randomly to try and get back on track). In no way are you the protagonist in That Dragon, Cancer. You’re just finding out what happened to him.

Joel, like everyone else in the game, is represented by an indistinct sort of mannequin, without any features (though adults do have hair and other basic distinguishing marks). You can say that this allows the player to transpose the events, and more easily see similarities between their own experience and the Greens’. In a game that is so deeply personal, though, it feels odd to be looking right at a little boy, who you know loved dogs and pancakes, and “more”, but whose face you cannot see. Perhaps the Greens understandably wanted to keep a bit of Joel to themselves.

The representation of a familly dealing with the protracted illness of a child is well done, but wasn't as interesting to me as the exploration of faith that was inextricably woven into it.
8 Simple, effective visuals Interesting religious overtones Arresting topic represented well Slightly off-putting character models

A videogame developer’s love letter to his son.

A videogame developer’s love letter to his son.