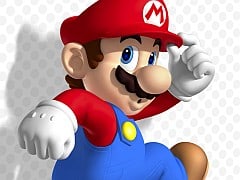 When you’ve conquered the galaxy twice, where do you go next? The universe would seem to be the logical step forward, but then Nintendo’s mascot – particularly in recent years – has rarely taken the most straightforward route. So rather than expanding outwards, Nintendo has scaled back, bringing its hero into sharper focus. It’s a journey into the universe, all right, but instead of drifting through nebulae, arms outstretched, Mario has his feet on familiar ground. It’s his universe; the Super Mario Universe.

Plenty has been jettisoned on his journey back from space. Gone is the storytelling bloat of Sunshine and Galaxy. There is no hub world to explore. Downtime is almost non-existent. This is a game precision-tuned for portable play. Nintendo has suggested 3D Land is the hamburger to Galaxy’s gourmet feast, but it’s more a tray of delicious canapés with no two bites entirely the same.

The streamlined approach is understandable. His recent 3D adventures have seen Mario bounding ahead, leaving some of his audience behind. For all Galaxy’s persistent inventiveness and sheer visual brio, not everyone could get to grips with the spherical planetoids and gravitational shifts. Little wonder many stuck with the familiar comforts of New Super Mario Bros. instead. So 3D Land is Mario extending a white glove behind him, hanging back for others to catch up, as if to say “hey, I’ll wait.”

Initially, it feels like a step backwards. Mario’s moveset is that of his 2D counterpart rather than the nippier version from Galaxy, Sunshine and 64. He’s guided with the circle pad, trotting around slowly unless you hold Y to make him run. There is no triple jump, and his backflip has to be charged. This is a Mario seemingly designed for side-scrolling environments, the Mario of his original NES adventures, except now he’s in a 3D world. It takes a little getting used to.

And it’s not the only nod to Mario’s past. The Tanooki suit from Super Mario Bros. 3 returns, while each level finishes with a familiar leap to the flagpole, and a 1UP reward should you grab the very top. A timer ticks down in the top-right, generous enough to allow for a few brief exploratory forays off the beaten track, while a hit from an enemy turns our hero into his squat, squeaking non-Super form.

But if it pays tribute to everything Mario was, Nintendo isn’t about to forget what he’s become. The levels may not be as expansive as Galaxy’s, but they’re equally inventive, shifting perspectives from side-on to top-down, with isometric interludes in between. Each holds myriad secrets, from brief mini-games to earn coins or power-ups to starman sprints above the clouds, with applause sounding if you defeat every enemy before Mario’s invincibility wears off.

There’s a variation on Galaxy’s comet medals, except here there are three to collect, often requiring smart use of power-ups or wall-jumps to reach. It’s here you’re reminded that Galaxy’s spin jump offered a second chance to redeem mistimed leaps, allowing you to be a little sloppy. There’s no get-out-of-fail-free card here, and 3D Land’s more exacting challenges in the later game enforce precision platforming.

It’s still one of the most forgiving Mario games you’ll play. Long jumps and backflips are rarely required, and the game is so generous with lives that most will finish the game with at least fifty to spare. That doesn’t, however, stop it from being an absolute delight throughout. As with EAD Tokyo’s previous works, its inventiveness is only matched by its generosity. Ideas that could happily bear repetition are thrown away in a single stage, never to be repeated. It’s full of delicate flourishes: there’s a wonderful, top-down tribute to Zelda, and a neat visual gag on the level select screen that sees Bowser’s castles get progressively larger and more ornate, forcing Mario to run for a few seconds to reach the start point.

The use of 3D is exemplary, too, especially in the stages featuring the best of the power-ups: the propeller block. Here you’ll spiral through huge, empty skies, Mario’s legs kicking away as you slowly descend towards distant platforms, these vertiginous drops benefiting enormously from the all-too-convincing illusion of visual depth. Elsewhere, you’ll encounter optical illusions, rooms where platform positions can only be effectively determined with the slider pushed upwards.

It almost goes unnoticed, but the camera is immaculate, sticking so closely to Mario in the main that on the few occasions it zooms outwards, the sense of scale – enhanced by the 3D – is remarkable. It perfectly frames the best visuals on 3DS to date; though there’s nothing particularly showy here, those bright, chunky worlds and their inhabitants look sharper and more solid than ever on that stereoscopic screen. The music is as spry as the plumber himself, though it’s a disappointment to hear so many themes repeated.

It’s not the only misstep. The Tanooki suit looks adorable, but is overpowered, its Yoshi-esque flutter-jump occasionally making a mockery of otherwise testing obstacle courses. The boomerang suit, by contrast, feels a little underused: its projectile is helpful for grabbing medals that would otherwise require a tricky combination of jumps, but little else.

Otherwise, this is a game brimming with confidence, assured enough to reference its past – including a route to a warp pipe at the back of World 1-2, for example – while putting a new spin on established standards. As its accessible early stages do their best to ease in newcomers, it’s these nods to Mario’s greatest hits that will keep veterans happy; a collection of classic tunes where the fans can sing along to the chorus.

But the best is saved for the encore. After a tremendous final battle, it suddenly dawns that you’re only halfway there. Those gentle introductory stages are remoulded into much sterner tests, with timed challenges that prize both precision and pace. Other levels are so comprehensively reworked that they feel completely new. Many are completely new. It’s here that you’ll be grateful for all the lives you amassed and the plentiful opportunities to refill, because a few of these tests will see your stock rapidly deplete.

It is, then, a step back and a leap forward. As a gateway drug for those reluctant to embrace Mario in three dimensions, Super Mario 3D Land should be a huge success. And if Nintendo does manage to convince that audience, that’s something for us all to be excited about. After all, next time, he won’t have to wait around for anyone to catch up.

Super Mario 3D Land is a step back and a leap forward. As a gateway drug for those reluctant to embrace Mario in three dimensions, the game should be a huge success.
9 Bursting with secrets and ideas Superb use of 3D As ever, a joy to control A little too easy to reach the credits