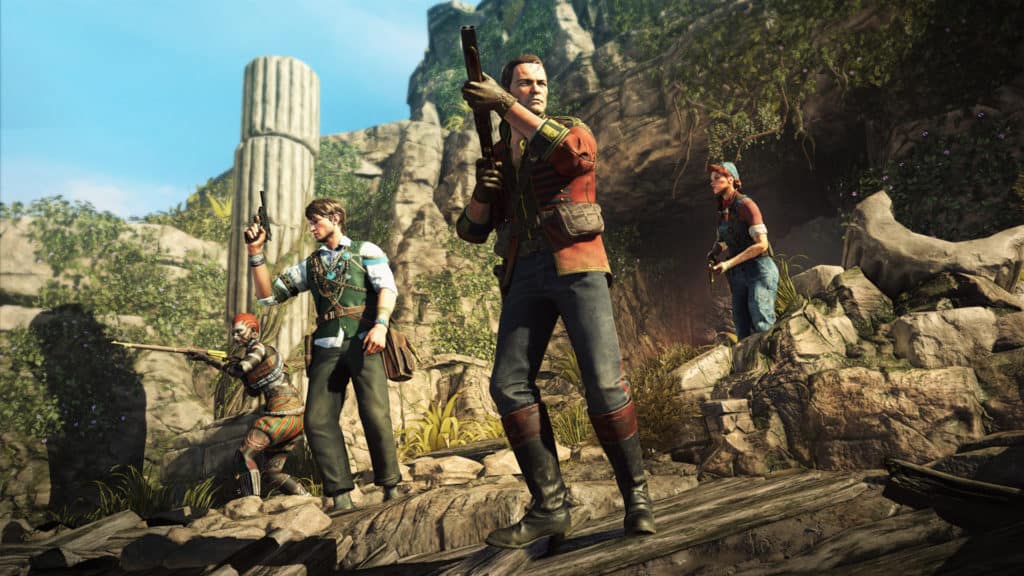 For the avid player, the act of stumbling across any courtyard in reality is underwhelming. Firstly, the sort we are accustomed to often require a trip to a National Trust property. Generally, they are much smaller than we expect; the far end is oddly absent a clear objective marker; and they are largely lacking in waist-high walls behind which to take cover, which is irrelevant anyway because they arrive completely clear of cronies – unless, of course, you go with English Heritage.

Imagine, then, after playing Strange Brigade, the disappointment that would befall any player should they ever travel to Egypt. Gone are the pendulous axes, the pressure-activated flamethrowers, and the spring-loaded wall-traps – all replaced with pedestrian pyramids and suburban sand. Such is the game show world presented to us in Rebellion’s shooter: more obstacle course than ancient tomb, its contestants similarly focussed on the amassing of points and prizes.

The official party line, however, is that they are there to save the world. Arriving in Egypt in their airship, the team aims to rid the world of the newly awakened Seteki, a Witch Queen whose scabrous rule of Saharan Africa, nearly 4,000 years ago, led to her being overthrown – her temples sacked, and her existence erased from the history books. Her resurrected armies now crawl over dig sites and temples like ants, its ranks swelled with skeletal soldiers, mummies, zombies, supersized scorpions, minotaurs (pinched from Greek mythology), and all sorts besides. 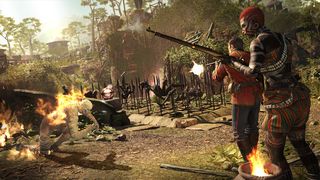 The Brigade’s methods are part of a gaming tradition that predates even Seteki’s rule: shooting things. It’s unfortunate, then, that gunplay is a flighty affair, with sensitive aim and a pinprick crosshair, and its jerky movements take some getting used to. It’s a light chassis, upon which much is bolted on. Overwhelmed by sheer numbers, you quickly learn to take advantage of the environmental hazards: pinging a round off a glowing orb to activate spinning rotary blades, or firing at red pottery to set the horde ablaze.

Then, there are the amulets, each of which bestow different abilities; the professor, Archimedes de Quincy, unleashes a swarm of scarabs, while the factory-bred warrior, Gracie Braithwaite, launches enemies skywards on a hellish backdraft and slams them to earth with a bang. These can be swapped between missions, and weapons can be encrusted with gemstones that bless your bullets with elemental powers, cause them to bounce between enemies, or intensify their potency.

That’s what Strange Brigade is all about: what can be intensified, and how. But this brings into question its core potency. Movement is done at a high-speed spasm, at first unwieldy and later, given the sprawling expanse of the levels, welcome. But it’s imprecise, and your dash is more convulsive than evasive, often hurtling you into bother like a bull in a china shop. The shooting is gnawed at by collision detection trouble, so if your foes encroach within ten feet, you’ll need to race backwards and steady your aim. This lends fights the frantic feel of a palaver, as you battle the game along with the ghouls. However, there are tasty flourishes strewn throughout: when carelessly rummaging through ammo boxes, for example, there’s a shower of shells like sprinkles over ice cream; and headshots are a wonder, the crunch of skulls as satisfying as the cracking open of a pistachio. 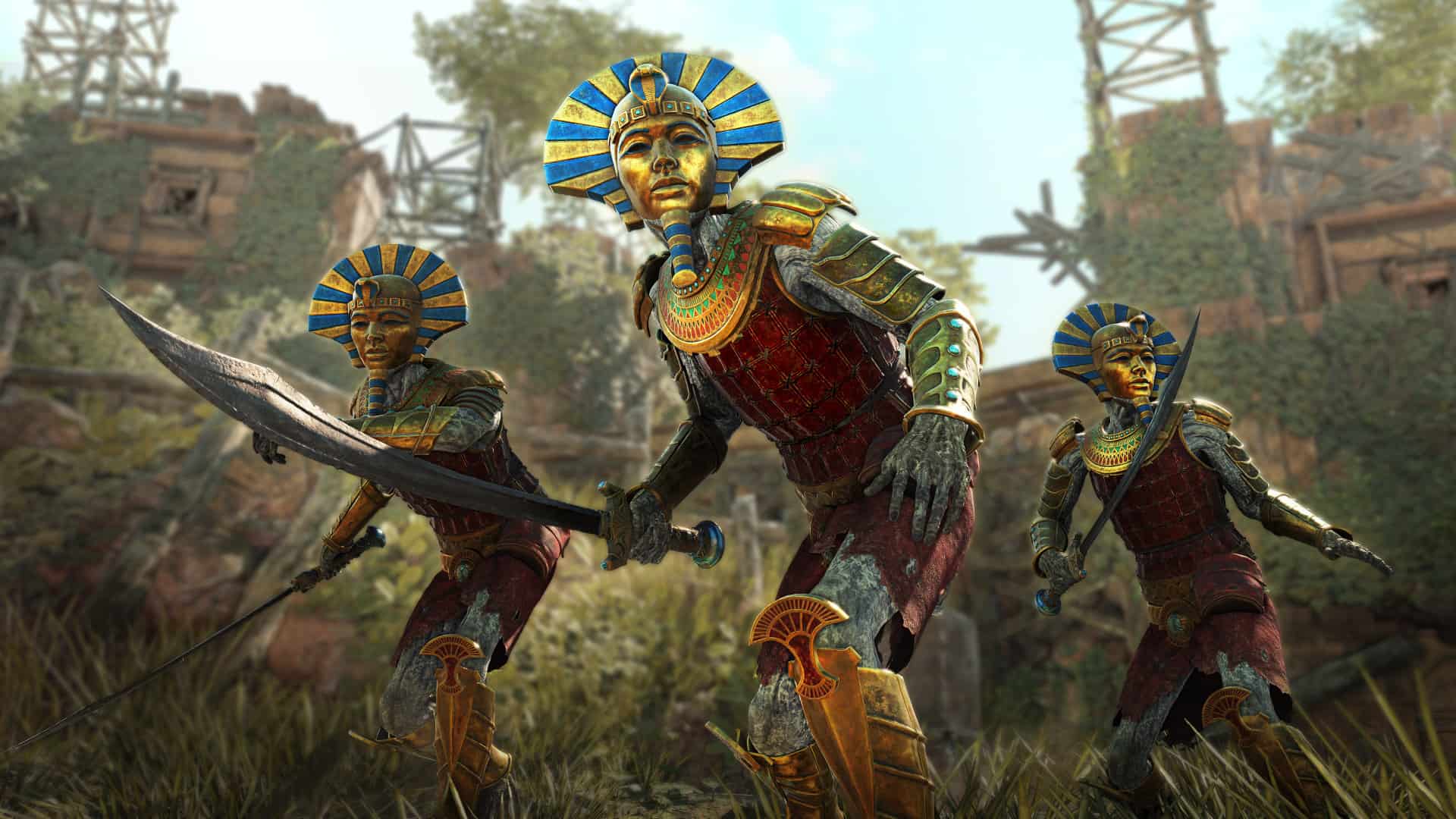 After plundering the area for scattered treasure and dumping it into weapon upgrades, the rhythms of play are pleasing when it’s all in full flow – they benefit from being broken up with puzzles. These are the sort that don’t tax the brain so much as the eyes, their solutions never entailing much more than a root around your immediate vicinity for the telltale glyph. They are welcome roughage, aiding in the digestion of heavy firefights.

By way of sweetener, the game is swathed in spirited attitude. There’s a well-thumbed pulp sensibility to Rebellion that foams from the pages of its comics (2000AD, Rogue Trooper) and soaks its games in style. It’s in every frame of Strange Brigade: The mummy, the witch, and the adventurers; the undead armies; the zeppelin, floating like a bloated fortress. It’s all channeled from the great 1930s serial adventures, and it’s tuned to a comedic wavelength – the game’s narrator firing off stagy quips like an announcer from the Golden Age of Radio.

The trouble is the game doesn’t treat its daftness seriously. The mood foregoes menacing for mincing, and takes on the quivering cardboard feel of a Carry On film. Sniper Elite, with its mission briefings doled out in dossiers, had the Second World War to gird its thrills with gravitas. And Rogue Trooper had the Norts, whose blonde crew-cuts were clipped straight from an aryan propaganda poster, and who weighted the ludicrous story with earnest evil. There’s no such camp seriousness to Strange Brigade; Rebellion’s impeccable grip on genre slips, deflated by the air of its tone. 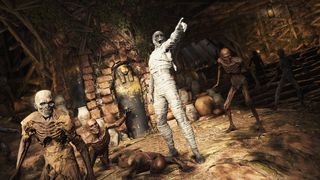 What scant story there is – delivered in the skies above Egypt by a matriarch through an old wireless, like Charlie to his Angels – is offered up limply, the throwaway cut scenes emblazoned with a ‘Hold A to skip’ marker. They are merely on-ramps for play, after all, and the campaign is merely an on-ramp for co-op – where the game hangs its hat.

Sure enough, when the spacious maps are filled with greater hordes and your comrades enliven the action with teamwork – or amusing lack thereof – Strange Brigade is at its most raucous. And where the repetitive nature of the missions remain fresher for longer. Score Attack and Horde modes vie for your attention as well – and the ingenious mechanic whereby environmental damage affects your fellow players makes for some delicious mischief. It’s better with friends, then – but, aside from showering, reading a good book, and dying, what isn’t?

Rebellion has burnished the game’s centre with modifiers – weapon upgrades, puzzles, co-op – but the moment-to-moment play is where its weakness lies. There’s much of the mummified about Strange Brigade: swaddled in fresh layers of humour, preserved with multiplayer, but staling underneath.

Rebellion has wrought a breezy shooter, angled it towards multiplayer, and burnished it with wit, but its minute-to-minute action is repetitive and feels imprecise.
6 Chaotic rhythm is fun when it clicks Co-op is fun Repetitive Shooting is shonky