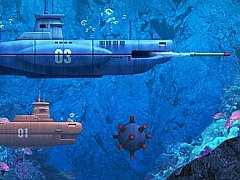 Alright, I admit it: I was wrong on this one. In February when I came back from Nintendo’s 3DS showcase in Amsterdam, I suggested that Steel Diver might be one of the better releases in the platform’s early release window. Now the curious submarine outing is finally out in Europe, and it’s clearly time to chow down on humble pie. Steel Diver certainly makes me think of an oblong-shaped thing that bobs up and down in a body of water… but that thing isn’t a submarine.

Before I get carried away with being nasty, let’s look at the game’s positive points, as there are actually a few things in its favour. For starters, the basic concept is rather original. Steel Diver puts you in charge of one of three submarines and then tasks you with steering your way through a two-dimensional level, packed with mines and enemy vessels. Rather than steering your sub directly, navigation is handled via a set of sliders on the touchscreen. One of these controls your horizontal speed in either direction, a second sets the speed at which you rise or sink, and two of the subs also have a dial that allows you to pivot your ship at an angle – the latter is particularly useful for aiming torpedoes or for making subtle adjustments to your course.

Given that the game is set underwater – a popular location for games in this genre, you’ll be surprised to hear – it’s vital to consider inertia and momentum when plotting your movements. It takes a bit of time to build up speed, but more importantly it also takes a while for you to slow down, even if you slam the relevant sliders in the opposite direction. Timing also creeps into combat, too. You’ve got an infinite supply of torpedoes, but the three subs on offer have a different number of launch chambers, each of which as its own touchscreen trigger. Once a chamber has been fired there’s a short pause before it reloads, and so mindless spamming isn’t really an option. In addition to the forward-firing torpedoes all subs get a temporary cloaking device that hides them from incoming projectiles, and the smallest craft also has the ability to fire upward missiles.

As a result of all these timing requirements, the game starts to feel like a nautical-themed plate-spinning competition. Initially you’ll clumsily steer your sub into every mine you can see, bouncing off the walls of underwater caverns and slowly drifting into enemy torpedoes, with each collision resulting in a cheesy vocal sample that yells “SHIP DAMAGED!” After a bit of practice, your handling will graduate from ‘hopeless’ to ‘largely incompetent’. You’ll still bash into as many threats as you’ll avoid, but generally this will happen because you’re trying to rush through the level – perhaps, if you’re feeling cocky, because you’re trying to beat one of the optional developer ghost times.

The levels themselves are essentially aquatic obstacle courses for your lumbering subs, but when you’re facing several enemies at once it can feel as if you’re playing a side-on arcade shooter with a particularly sluggish control scheme. To an extent, that is exactly what you’re playing. Steel Diver is an odd test of skill and patience, but for all its originality it rarely manages to be fun. There are occasional hints that the slider setup could produce a satisfying challenge, but most of the time the action is simply aggravating – like one of those “pass the loop along the wire” games.

The real kick in the balls, however, is that the overall package is painfully thin. Aside from the training stage, the main campaign boasts a shockingly generous total of seven levels, each lasting between five and fifteen minutes on your first play, and two of which are initially locked. You also get eight time trial stages. Thanks to the omission of enemies, these are more enjoyable than the main game, but you can breeze through the lot of them in the time it takes to run a bath – and at that point you could just get in and pretend that the soap is a submarine, which would be a lot more exciting. Slow-moving marine craft aren’t exactly the best choice for time trials, after all.

There are two other modes on offer, but they’re meagre to say the least. Persiscope Strike is essentially a shooting gallery that lets you use the 3DS’s gyroscope to spin about blasting torpedoes at ships that go zipping past. It’s actually quite a likeable mini-game, especially if you play on an office swivel chair, but it loses its novelty value swiftly. A curtailed version of Periscope Strike pops up between missions in the main campaign, so if you start out by jumping into that first it’ll seem old news by the time you get around to check out the standalone bit, with its grand total of three variations.

The final stab at add-on value comes in the form of Steel Commander – a turn-based mode that can also be experienced via Download Play. Here two players (or one and the AI) take part in a simple strategy battle that blends Battleships-like guesswork with yet another helping of Periscope Strike. It’s hatefully dull, and I really have nothing else to say about it, good or bad.

It’s rare for a game I review to be so flawed as to actually inspire anger in me, but Steel Diver comes extremely close to doing just that. As I’ve said, there’s a smattering of potential in the basic concept, but the overwhelming feel I get is that the developers couldn’t be bothered to do the game properly. The approach to unlockable content is particularly insulting. To open up the last two levels of the campaign you’ll be expected to complete the first five using all three of the subs; while the trio of craft have their differences, the contrasts certainly aren’t enough to lend significant variety to the repeat playthroughs. There’s eventually an Expert mode to unlock, and if you can be bothered to play the same stages enough to acquire it, I dare say you’ll enjoy doing them all yet again on a harder difficulty.

Perhaps the biggest piss-take is to be found in the power-up decals that you can win via the inter-mission Periscope Strike sequences. In theory, you can win these badges and then apply them to your sub, altering its properties to give you an easier time when ploughing through the stages for the umpteenth time. Bewilderingly, the icons will only grant perks once you’ve randomly won them a certain number of times – and some of the more useful badges have to be collected 10 times before they work. You read that correctly: the developers could only be bothered to make seven campaign levels, but they expect gamers to play through them enough times to gather 10 coloured crowns from what is effectively a random drop mechanic. Then and only then will the game give you a perk for lowering the health of boss enemies… the same bosses you’ve presumably learned like the back of your hand by this point.

And who do we have to thank for this treatment? Why, Nintendo itself. Incredibly, this is an in-house attempt and a £40 launch window title. If Steel Diver is an example of how the Big N is planning to treat first-party 3DS games in the months to come, the future is bleak indeed.

If Steel Diver is an example of how the Big N is planning to treat first-party 3DS games in the months to come, the future is bleak indeed.
4 The central idea has (had) potential The unlock system is stupid Embarrassingly thin on content Steel Commander is very, very dull

Guide a submarine in three dimensions.

Guide a submarine in three dimensions.