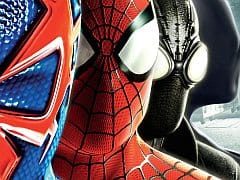 Spider-Man: Shattered Dimensions is a work of pure indulgence, a tapestry of silver age fanservice framed with an overly elaborate multiverse-spanning plot. The wafer-thin conceit is that you flick between four spider-men from various comic incarnations – Amazing, Ultimate, Noir and 2099 – who are working together to fight a variety of familiar villains and recover a magical (read: potentially apocalyptic) artefact, eventually culminating in a showdown with old foe Mysterio.

The game is – wait, Mysterio? This is a guy whose most significant trademark is wearing a fishbowl on his head, and his defining action was blowing his own brains out in an issue of Daredevil. How bad must things be if developer Beenox is forced to scrape the barrel so hard only Mysterio is left remaining? Sure, there’s Carnage, Vulture, Deadpool, Doctor Octopus and Kraven, but Norman Osborn’s stock must have taken a severe battering if he’s playing second fiddle to Mysterio. Mysterio!

But in all seriousness, the game’s ensemble cast only serves to prove what most fans will already know: it’s the vanilla Amazing Spider-Man that’s the best. His is the campaign that ties the others together, and he’s the one who receives cult icon Neil Patrick Harris as a voice actor. Still, despite efforts to mix up the quartet with an aesthetic mix of the popular (Amazing, Ultimate) and niche (Noir, 2099) the actual end result, with one exception, tends to play exactly the same.

The real pearl of the game is the punning script, packed full of the one-sided bantering that’s come to define the friendly neighbourhood webslinger over the decades. It manages to elicit more than a few chuckles across its duration, though does fall victim to regurgitating the same one-liners from time to time. The solid (if corny) voice acting goes down a treat, though, and Stan Lee’s narration neatly fits with the tone of the game. Don’t expect gritty, basically.

It also helps that developer Beenox also has a keen eye for the set-pieces. One level has you jumping between oil rigs by way of surfing a capsized boat across a tidal wave, all while being filmed as the contestant in Deadpool’s ‘The Pain Factor’ TV show; another has you darting over splintered shards of wreckage flung out from a stage-engulfing typhoon; and one has you chasing a cannibalistic Vulture through dimmed, prohibition-era backstreets and alleys.

Beenox’s decision to theme each stage around one particular rogue pays dividends, with multiple spiralling encounters proving far more rewarding to the player than simply tossing in cursory boss fights as level finales. After enough to-and-fro, each villain will activate the powers of their shard trimming – that one that will destroy the universe – which signifies the big, traditional end of level fight. It is a shame, however, that each souped-up encounter is usually just a more difficult version of former tussles.

The game is divided up into three acts, each featuring a level for each of the spider-men, and a very lengthy finale sequence. Noir is the most individual of the four, although its implementation is the weakest overall. Its style is lifted piecemeal from Arkham Asylum’s stealth sequences, albeit with a moody, monochrome aesthetic. You take an expectedly predatory role, popping out of the shadows whenever you see a flashing icon to perform powerful, booming single-button takedowns. So far so Arkham, but the main problem here is that Noir’s levels have none of Batman’s finery in their design, and the sloppy AI makes it too easy to web up even the largest packs of enemies. There’s still an undeniable charm in picking off your targets one by one, however.

Noir’s saving grace is that it cuts up the repetitive familiarity of the other three. We’re firmly entrenched within typical brawler territory with these, though each permutation has its own particular weighting: Amazing focuses on combos, 2099 on speed and Ultimate on mashing together attacks. This works well, ensuring that the core practices are the same across each incarnation: a five string light combo is always a five string light combo. But instead of making four unique styles of game, as the back of the box would have you believe, Beenox has made one with a stealth level every now and then.

Still, there are a fair amount of bells and whistles to help carry things along. Ultimate (donning the symbiote suit) has a Rage meter to boost his damage, turning his attacks into flowing, powerful waves of spiky tendrils. 2099 can (less spectacularly) slow down time, although his levels are complimented by elaborate constructions of futuristic flying cars, secret labs and hologram advertisements plastered absolutely everywhere.

Levels have a tendency to drag on a bit, however, and the strictly linear design will likely perturb some fans who’ve become accustomed to the open world nature of previous games. The distinct aesthetic variety functions somewhat as smoke and mirrors for the rather poor mission variety too, which often boils down to either progressing from point A to B, ferrying civilians about or battering conveyor belts of enemies while you wait for a door to open.

The game’s schizophrenic control scheme also has a habit of flicking between smooth, acrobatic fluidity and stodgy, camera-swirling madness – often within seconds of each other. Combat is dextrous and well handled, but some occasionally dire camera angles force you to run around in the wrong direction for a few minutes. Navigation across obstacles is rarely an issue, with a clever system of zip-lining achieved by tapping the right trigger, but a less effective web swing can be deployed when you hold it: problems arise when you try for one but get the other.

A hardy system of tracking the hundreds of collectibles and in-game accomplishments helps keep you occupied through the poorer moments. A constant sense of accomplishment sets in for following instructions to perform the most perfunctory of tasks – like kill 50 of something, smash 10 other things or do certain bits within a prescribed time – with a ticker on the top right of the screen always informing you how close you are to the next success. Points awarded from these tasks go towards buying new moves, boosting your abilities or simply splashing out on alternative costumes.

Despite some occasional frustrations, Beenox has done well with Shattered Dimensions. This isn’t to Spider-Man what Arkham Asylum was to the Caped Crusader, but nonetheless it perseveres as a consistent, rugged and undeniably enjoyable romp through some bright colours, excellent set pieces and laugh out loud lines.

Four different takes on the Spider-Man franchise is one video game.

Four different takes on the Spider-Man franchise is one video game.