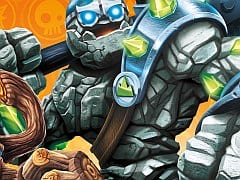 The greatest trick Activision ever pulled was convincing the world that on-disc downloadable content wasn’t such a bad idea after all. It turns out the act of locking away characters and levels is perfectly acceptable as long as you bung in a free toy. That’s the cynic’s perspective, but the beauty of last year’s Skylanders is that it was good enough to make such observations entirely moot.

Repeating the process could have proven a tricky proposition for developer Toys For Bob. How do you bottle lightning a second time? Get it wrong, and you’re looking at an enormously expensive one-hit wonder; get it right, and you’ve got a bona fide phenomenon on your hands. The trick, as always, is to dream a little bigger. Though rarely has that concept been interpreted quite so literally as it has with Skylanders Giants.

You can see where all the mountains of money went. The original never seemed particularly cheap, but the developer has spent a chunk of its millions on buffing things up. Everything looks a little crisper, and the frame rate has been improved. It isn’t solid, mind: indeed, there are places where it seems to fall victim to lag and dips, but that’s because there’s a great deal more going on. But the extra power of the HD machines has clearly been utilised, whereas last year the 360 game felt like an upscaled Wii title and betrayed the identity of the game’s lead platform.

Skylanders Giants is still the same Kiddy Diablo it was last year. You smash objects and bad guys, gobble up loot, solve simple puzzles, fight bosses and, if you’re lucky, discover secrets. As with any good dungeon crawler, any route that doesn’t lead you closer to the exit always hides something worthwhile.

Continuing with the bigger is better approach, there are now more baubles and trinkets to hoover out of the environment. Okay, deep breath. There are now four bog-standard treasure chests on each level, along with the new hats and a trickier Legendary Treasure, which this time has more value as it’s used to decorate your airship hub. All of these are joined by Sapphire Butterflies, each of which contributes to an overall discount when it comes to buying new abilities. When you’re done with all that lot, there are wheels to find that slot into a machine called the Luck-O-Tron, giving you extra health, food and experience from each enemy you defeat. And…relax.

Meanwhile, there’s a proper story with expensive CGI cutscenes. A couple of these rather outstay their welcome, but for the most part the dialogue is brisk and witty. Where the original game often felt like a loose collection of gags strung together by a threadbare plot, there’s a little more of a story this time, including an intro that gets dangerously meta. Plus a bit of slapstick, of course, because who doesn’t love that, eh?

More budget, more characters, more loot, more story: there’s more of everything, basically. Well, almost everything. This approach hasn’t been extended to the number of stages. Unless there’s a bundle of levels that unlock when you’ve spent 5 zillion pounds on new figures, there are noticeably fewer stages in Skylanders Giants. Thankfully, there’s a trade-off in that they’re longer and more elaborately designed than those that came before. Phew.

It’s also even easier than the original. There were a couple of notable difficulty spikes last year, most evidently in a final boss battle that would test the endurance of even the most patient child, but there’s definitely more of a gentle curve this time. There’s an Easy setting, too, though most kids should be able to conquer Medium without too much trouble – especially as a plummy-voiced shopkeeper sells an item that allows you to skip the pesky rotate-the-lock puzzles.

There’s also a new mini-game called Skillstones, which is a bit like noughts-and-crosses mixed with a card battling game, and which, more importantly, is potently addictive. And several hours with the Battle Modes reveals that the new titular Giants are far more effective in the games where brute force is required, with those carrying ranged attacks particularly deadly against their diminutive counterparts. Still, their lumbering pace makes it a closer call than you might expect in games like the gridiron-esque SkyGoals, though players may have to enter a gentleman’s agreement to use like against like when it comes to the new Ring Out variant.

The Giants play a part in making the game easier: they’re slower, but so much more powerful than the regular ‘Landers, and capable of withstanding a great deal more punishment, allowing you to blunder through levels without ever really needing to take care. They bring a few new abilities to the table, also: they can lift boulders, divebomb through cracked ground, and perform feats of strength, all by hammering on the Y button. That’s one change that some might feel is for the worse: there was something oddly satisfying about waggling the right stick to shake the locks off a treasure chest.

Still, the Giants are attractively designed in both plastic and digital form, and there’s a genuine sense of weight and heft to their movements that make them a pleasure to control. They’re a little too sluggish to avoid some of the faster-moving hazards, but they can often simply bludgeon their way through, killing smaller beasts like the toothsome Chompies by simply walking into them. Better still, they light up when placed on the Portal of Power, which is just about the best thing ever if you’re six.

Early favourites among the Schilling clan so far include Swarm, who attacks with sharp claws and can transform into a cloud of wasps. Bouncer – think a robot Zebedee on nandrolone – can shoot bullets from his fingertips. Crusher, meanwhile, comes in normal and Granite varieties – the latter’s black and blue hues entirely appropriate given the beatings he gives out with his giant hammer.

Competing with the Giants might seem like a tall order, but the regular-sized Skylanders are fun, too. Pop Fizz is perhaps the most interesting and unique of the newcomers, glugging a potion that temporarily turns him from likeable goggle-eyed furball to monstrous Mr. Hyde, attacking quickly and furiously with sharpened claws. The jousting Fright Rider sits atop a skeletal ostrich, alternately attacking with beak and lance, while ice queen Chill – an attempt to prove that this isn’t just about toys for the boys – eventually gains the power to shoot narwhals, which is just about the best thing ever if you’re any age.

The new versions of last year’s figures, however, leave a little more of a sour taste. Admittedly they’re better designed, but with their level cap upped from 10 to 15, and boasting an additional power, they end up leaving the originals feeling comparatively feeble. When you’ve spent hours levelling up, say, Terrafin, it’s a bit galling to discover he’s outmuscled by a new model. Such is the nature of toys, perhaps, but in a game context, the idea of an existing character being treated as a second-class citizen feels wrong. Moreover, while it’s sensible that the figures will be released in waves, the presence of their soul gems and preview videos are a nagging reminder of some characters’ current unavailability.

And therein lies the problem reviewing a game like this, because until all the figures are available, it’s impossible for any appraisal to be entirely comprehensive. Sure, none of the new characters will fundamentally change the game’s design, but it’s impossible to fairly test the multiplayer component when half the figures (and therefore in-game characters) haven’t even been released.

Talking of which, that’s currently a bone of contention in my house: “I would give it 9/10,” comes the expert verdict of my son, James. “Do you know why it’s not a 10? Because you have to press the Y button really fast instead of moving the stick and you can’t get Thumpback and Flashwing yet.” You’ve already got 15 of the bloody things, I remind him. “Yes, but they’re the best ones,” is his immediate riposte.

Staggered figure release dates notwithstanding, all the signs point to Skylanders Giants as a case of refinement over revolution. A vast majority of its changes are clearly for the better, even if that initial thrill of seeing the figures transfer from portal to game has been diminished through familiarity. It would have been easy to just toss out a sequel for a quick buck but I think the game shows a genuine desire to create something intriguing. In other words, despite the occasional glimpse of dollar signs in its publisher’s eyes, Skylanders Giants is that rarest of beasts: a kids’ game that’s very, very easy for adults to like.

Despite the occasional glimpse of dollar signs in its publisher's eyes, Skylanders Giants is that rarest of beasts: a kids' game that's very, very easy for adults to like.
8 Looks better than ever Giants are a great addition Still only two players supported, and no online modes Figures more expensive than before