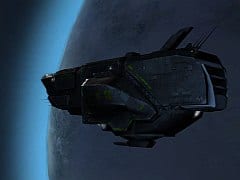 Sins of a Solar Empire Review

You might not think it to look at me, but I actually have something in common with James Bond. No, really. It’s “The World is Not Enough”. For Bond, it’s a family motto. For me, it’s more a symptom of my megalomaniac complex. Why would I want to bother piddling about conquering one pitiful little dirtball when there’s an entire galaxy out there just waiting for my harsh, but ultimately fair, leadership? Sins of a Solar Empire offers just that opportunity of galactic domination you’ve been waiting for.

Sins of a Solar Empire isn’t a standard real-time strategy, but what one of those self-consciously cool tech-evangelists would call a mash-up. It takes ‘4X’ (eXplore, eXpand, eXploit, eXterminate) gameplay, normally associated with turn-based strategies like Civilization, and marries it with a grand-scale real-time strategy, making the game play like a cross between Galactic Civilizations II and Supreme Commander. Obviously, the potential pitfalls of merging two genres like this are as huge as they are plentiful. Thankfully, Sins sidesteps the biggest ones, stumbling into only the odd interface niggle – but more on that later.

Like any self-respecting RTS these days, Sins features three playable factions: the Trader Emergency Coalition (TEC), the Advent and the Vasari. The TEC represent the typical hero-human society, having no real special powers to speak of, but being very industrious and having a fleet that lends itself to the mass production of ships. The Advent are a sect of religious nutters that were cast out by the TEC for worshipping “the Unity”, a religion which heightens psychic powers. Naturally, they have a very different philosophy to the TEC, utilising energy weapons (rather than ballistic weapons, such as autocannons) and have a balanced fleet that utilises the strengths of their hive mind, being very mutually supportive. Finally, the Vasari are the dastardly aliens of the piece, being equipped with very tough (but very expensive) ships. The Vasari arguably have the technological edge of the three factions, having some weapons that will bypass a ship’s shields entirely. The races are quite nicely balanced, and it will probably take you a couple of play-throughs before you find a favourite. Personally, I prefer the Advent, if only for the haughty cruisers which reply “We’ll consider it” dismissively whenever you give them an order – a very nice touch.

The differences between each faction really manifest themselves in the tech tree, which is pleasingly complex. There are separate trees for military technology and societal advancements, plus a separate tree that governs your fleet capacity. Relatively few research items have prerequisites, so you don’t need to slavishly plough your way through the entire tech tree if there’s one particular thing you’re after. However, there is a dependency on the number of research stations you have for each tree (military or social) to unlock each tier of research. These stations are relatively cheap to produce however, meaning that you can cherry-pick items from near the top of the research tree quite quickly.

Undoubtedly, the tech tree you’ll most want to concentrate on early in the game is the one governing your fleet capacity. The two sub-branches of this tree increase the number of capital ships you can maintain in your fleet and the percentage of your income needed to supply your fleet. You may research these sub-branches at different rates, but since capital ships consume much greater amounts of your resource capacity than frigates or cruisers, it is in your best interests to keep both at a similar level; otherwise it is difficult to maintain a good balance between capital ships and the smaller frigates and cruisers. This balance is important, as a fleet entirely composed of capital ships can be overwhelmed by a massed fleet of a few dozen cruisers and bomber squadrons. Once these trees have been fully researched, you can field a force of sixteen capital ships and literally hundreds of cruisers and frigates, making for an impressive sight when you assault an enemy planet.

It’s just as well you can build such large fleets, because you’ve got a lot of space to cover. Sins of a Solar Empire even outdoes Supreme Commander for scale; your view of the action is able to zoom right in to show a frigate until it fills your screen or – at the other extreme – taking you back out to give you an overview of a cluster of solar systems. You can move between both extremes of zoom with ease, with the zoom-to-cursor functionality allowing you to shift your view from one planet (or star system) to another with a quick move of the mouse.

Maintaining a large fleet, however, is very costly, so you can’t afford to neglect your economy. Planet upgrades can be bought, increasing the potential size of your colonies, and trading platforms can be built in orbit, enabling inter-planetary and even inter-faction trade, further boosting your income. There is even a fully-fledged black market on which you can buy or sell crystal and metal to either make up a supply shortfall in production, or make a profit on a surplus. Crystal and metal is mined from asteroids around the planets owned by your empire (this is where the ‘eXpand’ and ‘eXploit’ part comes in) and opposing factions will look enviously at your resources and demand some of them in exchange for better relations. Diplomacy, on the whole, is probably the least developed aspect of the game. It’s a little disappointing that you can’t give missions to the other factions, or ask for resources from an ally when you’re in a tight spot in the single-player game. Perhaps this is a realisation by the developers that they couldn’t make the game too complex… The huge maps can have hundreds of planets to conquer and anything between two and a dozen opposing factions. There’s definitely a point where Sins reaches a critical management mass, and it can be a little too big for its own good.

Personally though, I love the sheer scale. Small maps with a handful of planets can be conquered in a few hours, but if you really want that space opera feel, you have to really invest a lot of time on the bigger maps, where the interplay between multiple factions allows you to scheme more effectively, siding with factions that allow you to assume the strongest strategic position in the long-term. Plenty of maps and scenarios have been provided by the developers, but the game’s longevity has been extended even further by the ability to create custom maps. This allows you to set-up some genuinely massive games, which can take dozens of hours to resolve. Being able to create and conquer your own star cluster with hundreds of planets negates any real need for a campaign: having a scripted narrative or formal mission structure would take away a lot of the freedom that ‘4X’ games benefit from.

You’ll note that I haven’t really talked about the combat yet. This is because despite the fact you’re going to be doing a lot of it over the course of a game, I didn’t really find it all that memorable; not for any lack of endeavour on the part of the developers, I should add. When you have the camera zoomed in on the action, combat can be quite spectacular, especially if two large fleets are involved. However, part of the problem with making a game on this scale is that control at the tactical level is much less important than seeing the big picture at the strategic level. Most battles will be won and lost according to the composition of the opposing fleets, rather than on tactical acumen, since the AI is pretty handy and will perform quite adequately without constant instruction. I mentioned interface niggles earlier: it’s in combat where they really manifest themselves.

Taking up the left hand side of the screen is the empire information bar, which allows you to select planets and fleets. Since enemy ships are also shown on this bar, it’s actually easier to give attack orders to your fleet using the icons shown on this bar than in the main playing area. This means that it’s more effective for you to run battles from a zoomed-out, strategic view, rather than while you’re zoomed in, using the cinematic mode to gorge on all the eye candy… So while the graphics are perfectly effective and atmospheric (if a little lacklustre), from a pure gameplay point of view, they could be considered completely superfluous. Not that this is a criticism which only applies to Sins: the same could equally be said of Haegemonia: Legions of Iron, another space-based game, which married a more traditional RTS campaign with large scale ‘4X’ gameplay.

Indeed, Haegemonia is quite a good comparison to Sins of a Solar Empire. Both games share a lot of common points, but if there was one feature from Haegemonia that Sins should have stolen mercilessly, it’s the planet browser. Once your empire spans greater than a dozen or so worlds, the empire information bar quickly becomes unwieldy, making it a little more cumbersome than it should be to conduct a quick overview of the worlds under your command. It’s by no means a fatal flaw, especially on small maps, but can lead to you “forgetting” to upgrade worlds purely due to the sheer breadth of your domain, damaging your economy or even leaving worlds undefended and open to attack. Of course, this is a consequence of the game’s ambitious scale, so is perhaps to be expected.

The slick blend of genres and the sheer size of the game make it hard to give an unreserved recommendation: Sins of a Solar Empire will not be everyone’s cup of tea. However, if you’ve been hooked to titles like Galactic Civilizations, experiencing ‘4X’ strategy in a real-time environment may be a revelation for you. Likewise, if you got a kick out of Supreme Commander, but wanted to have freedom to explore the fictional setting, rather than play through a fixed campaign, then you’re going to find a lot to like here. Ultimately, whether you’re going to enjoy Sins of a Solar Empire will depend on whether you prefer deep, slow-burning strategy to the fast-paced thrills of a tactical RTS. With its mix-and-match gameplay, Sins is certainly a title out of the ordinary, but very much an acquired taste. However, a bit like with Guinness, once you’ve acquired the habit, it’s a tough one to break.

With its mix-and-match gameplay, Sins is certainly a title out of the ordinary, but very much an acquired taste. However, once you've acquired the habit, it's a tough one to break.
8 Can build custom maps and scenarios Massive scale A fine blend of '4X' and RTS gameplay The GUI could be a little friendlier

Sins of a Solar Empire

Sins of a Solar Empire represents the birth of the RT4X genre,…

Sins of a Solar Empire

Sins of a Solar Empire represents the birth of the RT4X genre,…