Shadow of the Colossus Review

I remember talking to a friend a few months ago about how a game based around beating boss after boss could never be as entertaining as a traditional videogame. I scoffed at the great reviews Shadow of the Colossus received in the US and in my view those praising the imported version of the game were simply being swept along in a wave of hype. Fast forward to a few days ago and I would happily have stuck by my initial thoughts. The opening twenty minutes of the game left me frustrated at the camera, aggravated by the sloppy frame rate and baffled over how exactly I was meant to down a huge monster. It comes as some surprise then that as I write this review, I really wish I was playing it through again.

Playing as a young warrior atop a strong black horse, you enter an ancient temple carrying a seemingly dead young girl. Upon laying her down on a stone tablet a spirit from within the temple speaks of the only way to save the girl; you must hunt down and kill 16 giant beasts that lie hidden in the area surrounding the temple. Only then will the girl be saved. You’re not told who or what this mysterious voice is, nor are you told how killing these beasts will save the girl, but you jump on your horse and set off to find colossus number one.

Armed with only a sword and a bow and arrow you’re not exactly best equipped for fighting giant monsters, but you’ll be taking a more hands-on approach than you might be expecting. When raised in the air the sword also doubles as a handy route finder, reflecting beams of light that can be used to work out where your next target is hiding. Your noble steed helps you speed across the vast environment and within a few minutes you’ve climbed a cliff wall and come face to face with your first colossus. Make no mistake; these aren’t your garden variety boss characters. These are absolutely gigantic, well-armoured killing machines.

This opening colossus isn’t even that large relative to other colossi, but the sense of size and weight is still utterly incredible. As he slowly ambles across your view the ground shakes, trees move and the earth beneath his feet is churned up, and as you gaze up at the hairy beast you wonder how on earth this is actually running on a PlayStation 2. Once no longer awestruck you can get to work on actually bringing the giant down. Each colossus varies in how it needs to be taken out, but what you learn from the opening fight will be almost all you need for the rest of the game.

As I said, this guy is hairy (as are all the colossi) and you can use this to your advantage. You leap onto his hairy ankle and hold tight, climb up his leg, stab him to bring him to his knees, and use this moment to pull yourself onto his back. Once on, it’s a constant battle to stay there, with the brute not interested in being friends. He’ll shake in an attempt to throw you to the ground, but you can sit tight, assuming your grip holds up. The grip meter is probably the most important element in the game. A circle in the lower right corner of the screen indicates how much grip you’ve got left and replenishes when you aren’t holding on.

To make sure you can stick around, you’ll need to make the most of the time between violent shakes. Running around the beast without a hand-hold will slowly recharge your grip meter, and in the case of the first colossus you need to head straight to his head. With your sword equipped a vulnerable zone will be highlighted and it’s this area that you need to target with your sword. While holding on to the hair, and in moments of relative stability, you can raise your sword and plunge it into the beast’s flesh. The more time you wait before plunging the sword, the more damage you inflict, but you often don’t have time to inflict maximum damage with each strike.

With the first colossus defeated you’re attacked by some ghostly ribbons and returned to the temple. Here the statue of the defeated colossus is destroyed and the mysterious presence gives you some clues on the whereabouts of your next target. Your quest to hunt down the remaining 15 colossi will take you all over the surrounding area, and what a landscape it is. The environment is breathtaking in its scale, stretching far into the distance, featuring huge chasms, stunning waterfalls and lakes, incredible bridges and other suitably impressive structures. The beauty is compounded by some of the most glorious lighting ever seen in a videogame, let alone on the PlayStation 2. The game has an oversaturated look that goes well with the generally bright environments, but dark, dank areas look equally great.

Looking at various aspects of the presentation in isolation would reveal a number of weaknesses, but as a package Shadow of the Colossus is one of the most stunning looking games ever created. It’s easy to complain about the stuttering frame rate, the pop-up and the bland textures, but for some reason, it just doesn’t matter. Somehow, despite these numerous technical problems being obvious to even an untrained eye, you just overlook them. This is no doubt helped by the animations of the main character, his horse and the colossi themselves. Every movement, from the boy’s desperate attempts to hold onto a thrashing colossus to the powerful swing of a colossus’ sword, is frighteningly lifelike.

The sound, too, is just as it should be. While voice work is limited, the boy’s call for his horse and the spirit in the temple sound perfect. The ambient sounds help bring the game-world to life and the music is intense when it needs to be, kicking in when the in-game action heats up. It’s another example of how stunningly created the game is. Within a few moments, and without it seeming out of place, you can move from a tranquil setting to fearing for you life at the hands of a dog-like killing machine. The music makes the shift in tone all the more impressive.

You might think that the total lack of smaller enemies in the environment will make Shadow of the Colossus a lesser game, but you’d be wrong. Part of the fun is exploring the land without the need to contend with smaller foes. It’s all about the big guys anyway, so introducing puny fodder would have lessened the impact the colossi have. The variety in colossus design and the way in which they need to be taken down is more than enough to keep you entertained, with the fights often taking more time than it would take you to complete a level in a traditional video game. Each colossus is effectively a level in itself, and far more memorable than any you’ve played before.

It’s all too easy to heap praise on the game, but it’s not without the odd niggling problems; the most intrusive of which is the camera. It’s clear that its goal is to create a beautiful looking scene, but this often comes at a cost to gameplay. Even when taking direct control, at times you’ll find it almost impossible to get a good view of the action, resulting in more than a few expletives being muttered under your breath. In a lesser game this would be a deal breaker, but you’ll get over it here. Climbing the larger colossi is also occasionally rather cumbersome. It’s a given that climbing a giant beast isn’t going to be easy, but actually navigating around the mass of hair is frequently trickier than it need be. Reaching a relatively safe area on the back of a colossus before your grip gives way simply isn’t possible in some situations, even though the distance you need to travel is so small; your character just won’t move where you want him to, instead shimmying around until you fall to the ground in a heap. Thankfully, these problems can be forgiven, but it’s still a shame that they’re here in the first place.

If you had never played a video game before and were asked to come up with an idea for one, Shadow of the Colossus would be it. The premise is so simple, yet the way it’s been pulled off verges on the sublime. Slaying giant fantastical beasts is something almost everyone would want to do in a video game and Shadow of the Colossus lets you do that sixteen times. I’ve been intentionally vague about the colossi themselves as they’re the real stars of the show. Each encounter is an experience you’ll remember for a very long time and it’s something that should be enjoyed without much prior knowledge. Video games are at their best when you forget all about what’s going on in the real world, and for two days I was a brave young boy, riding my horse and risking my life to slay monsters of all shapes and sizes. It was two days I’ll never forget.

The premise of Shadow of the Colossus is so simple, yet the way it's been pulled off verges on the sublime.
9 Breathtakingly beautiful Incredibly atmospheric sound A unique experience A little short 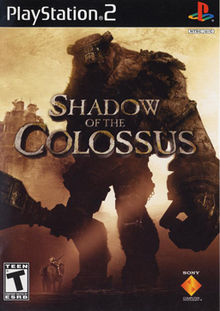