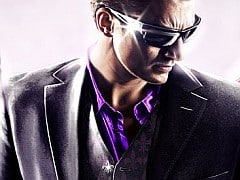 Three games in, and Saints Row is now much more than a Grand Theft Auto tribute act, growing from a feeble, shameless copycat into the gaudy celebration of wanton debauchery the tabloids believe Rockstar’s game to be. Now it’s no more like GTA than Mario; indeed, the comparison with Nintendo’s series isn’t entirely unwarranted, as Volition’s game shares the same generosity of ideas, and avoids being hamstrung by the need to conform to the rules of a pseudo-realistic gameworld. This is a game that constantly prioritises the needs of the player. It’s very smart at being stupid.

That said, the first hour or so creates a false impression. Sure, it begins with a bang: a crazy gunfight inside (and out of) a cargo plane flying over the city of Steelport, involving two daring airborne rescues and a moment where your protagonist skydives through the cockpit of the falling craft to beat up a single enemy at the back. But the early game settles into a very familiar rhythm as you attempt to rebuild the Saints’ empire in a new city, taking on a series of tasks that amount to little more than driving to a place and shooting a lot of people on arrival.

Yet it’s not long before Volition finds its feet, with a series of smart design decisions that underpin the mayhem that follows. While side missions are clumsily integrated into the story, these asides add variety to the early game, and they’re over in a matter of minutes, so even if you’re not a fan it’s not long before you can move on. The GPS system is terrific – set a waypoint, and huge floating neon markers pop up along the route to tell you where to turn, like an old-school arcade racer.

A neat smartphone menu system allows easy access to everything you’ll need, from a world map to selecting your next mission to upgrading your abilities and calling your homies for backup. You can even input cheat codes or activate a camera to take screenshots at any time by tapping down on the d-pad. Meanwhile, car handling is tight and responsive, and the new melee combat system is satisfyingly chunky, even if the game seems to do the occasional quick time event prompts for you half the time.

There’s a constant feeling of progression. Buying buildings not only expands your property empire and the associated cash boost you’ll receive per hour, but eats into the territorial percentage of that area’s gang. It also provides a place to instantly reduce your notoriety. If and when the action escalates to unmanageable levels, you can simply drive or run to your nearest owned building and nip inside to get out of harm’s way.

As you complete more missions you’ll be able to add further members to your crew, and as your respect rank rises accordingly, you’ll be given the opportunity to upgrade your protagonist and the gang. Complete one side mission and several other instances of the same will be instantly marked on the city map, so if you find an activity you enjoy, you can make the most of it to earn some quick cash and respect. You can also repeat these diversions, though after the first time your only reward is monetary gain.

It’s the thrill of the new that gives Saints Row: The Third an irresistible forward momentum. There’s always a new and crazy weapon of mass destruction just around the corner, always a fresh way to customise your character or your allies. You can tweak vehicles to make them faster or more powerful, allowing you to simply bulldoze any vehicles foolish enough to get in your way. You’ll fly above the tallest skyscraper and jump out, knowing that you’ll have a parachute to save you from being a fleshy pavement decoration. You’ll happily drive into water, knowing that you’re a button-press from warping instantly to the shore. You’ll stroll towards enemies rather than cowering in cover, knowing that you can withstand quite a bit of damage before dying. You won’t panic when you see an enormous brute headed your way, knowing that a few well-placed headshots is more than enough to bring him to his knees, before you finish him off with a satisfying one-button execution.

Volition’s game is full of little touches like this to make everything that bit more pleasurable. Like just about every major release these days it has moments where you’ll need to make a key decision, but either way the choice benefits the player. One early mission asks you to choose whether to blow up a building or simply commandeer it as a new base. The former gives you a huge respect boost, while the latter significantly increases your bank balance. It’s a win-win situation.

The plot is merely a framework to hang a series of increasingly hatstand set-pieces off, though the dialogue is genuinely funny on occasion. At the aforesaid BDSM club, you’ll threaten to beat a character to death and he’ll beg you to do so. Shortly afterwards, you make your escape on a cart pulled by a man in a gimp suit with a ballgag. As disappointing as it is to hear all the women described as “hos” and “bitches”, there’s an equal-opportunities approach here: female characters are treated no different to the males, and the dialogue adjusts according the gender of your avatar.

As outrageous as it gets – and, let’s face it, this is a game where you can run around in a rabbit suit, clubbing pensioners to death with an enormous wobbly purple cock – it’s so relentlessly offensive that it’s actually hard to be offended. Sure, it’s not a game you’d want to play with family members present, and you get the impression it’s setting back the cause of video games quite a bit, but there’s something good-humoured about the deranged orgy of chaos that just about every mission descends into. There was a slightly nastier undertone to Saints Row 2’s violence that’s pleasingly absent here.

The game still suffers a little from the usual technical foibles, like pop-up, the occasional frame-rate drop, and a few minor bugs. Steelport itself is a little bit dull, too. But crucially, almost everything you do isn’t. The insurance fraud missions return, feeling more than ever like a human version of Burnout’s Crash mode, with ridiculous physics that see you ragdoll between vehicles like that endless YouTube loop of Brad Pitt’s demise in Meet Joe Black. Hop into a car and sometimes you’ll be able to start a hostage mission, driving at high-speed for long enough while tailed by police until your kidnapee pays up. Other stages see you drive with a tiger in the passenger seat, avoiding crashes to avoid a mauling, and occasionally powersliding to reduce his rage. One mission sees you pilot a tank; another enlivens a wrestling match by introducing a chainsaw. It’s the kind of game where you can – and I did – play as an obese African-American woman with a voice like Jason Statham.

Ceaselessly crass and juvenile it may be, but then Saints Row: The Third has no higher purpose than to entertain you in the most ridiculous way possible – though that in itself is a lofty ambition. Its surprisingly clever and thoughtful design ensures that it succeeds – and then some. It is, as I said before, very smart at being stupid.

Ceaselessly crass and juvenile it may be, but then Saints Row: The Third has no higher purpose than to entertain you in the most ridiculous way possible.
8 Riotous fun in co-op mode Decent soundtrack and good voice acting Constant silliness with solid design to back it up A few technical kinks that should have been ironed out