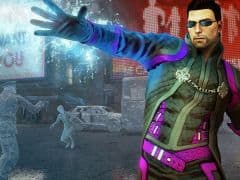 How far Saints Row has come. For a series once fascinated in cautiously emulating GTA, we now have the so-called triple-A’s most outrageous game; an open world epic that plays by one rule set only – that there are no rules.

Playing as both the boss of the Saints and the president of the USA, your day-to-day life of cancer-curing, bill-passing and stripper-pole White House installation is rudely interrupted when aliens decide to destroy the planet. You survive, and are inserted into a simulation of Steelport, created by marauding Power Ranger hyper alien Zinzak.

In this simulation, the rules of normal life no longer exist, so our pres is imbued with super powers that let him sprint at the speed of sound, leap over buildings and fire icy blasts from his hands. And with this same simulation, Volition has freed itself of any shackles – crafting a world, narrative and missions of extraordinary creativity, crackling humour and ripe parody.

The first hour is one of the best in recent memory, and even when the game settles down into a more measured pace it blasts you with ideas so ludicrous and off the wall I felt like high-fiving anyone in my immediate vicinity. Structurally, it actually mirrors Mass Effect 2 more than Grand Theft Auto, as you round up your surviving gang members and take on loyalty missions for them, before ploughing into an all-or-nothing final battle.

It’s not perfect; in many ways Saints Row 4 shares DNA with the games of Suda 51 – simultaneously works of left-field genius and self-indulgent slog. And it might not be a technical triumph (audio bugs and sporadic crashes are joined by a sketchy framerate and a fairly low resolution on consoles), but it makes up for it with style, panache and a freedom of movement only before seen in Crackdown and Prototype.

Even a heinous final boss encounter can’t dampen the mood. Saints Row 4 is a comedy gem; built by creators that are clearly on our side, and totally in love with what they do. It’s pretty easy to love them back.