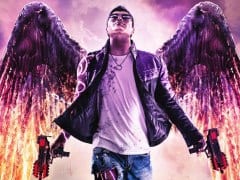 Saints Row IV on PS4 and Xbox One has been released at retail as a pack containing Saints Row IV Re-Elected (a content-complete and visually enhanced version of the last-gen game) and Gat out of Hell, a standalone downloadable expansion set in a version of Hell. Here we look at both separately but the score is for the complete retail package.

The Saints Row series has been on a rather steep slope into craziness ever since the original, rather po-faced instalment on the Xbox 360. This came to a brilliant, bizarre, and rather hit and miss crescendo with Saints Row IV, in which you play the leader of the Saints and the President of the United States inside a virtual world created by an alien, whose race have launched an attack on Earth.

It’s as crazy as it sounds, allowing developer Volition to go to town on things that usually wouldn’t have worked in a simulation of a real world. So, you end up being a superhero of sorts, complete with special abilities, such as being able to leap into the sky, run really fast, stomp the ground and glide through the air like a flying squirrel. Some missions and ideas hit the target better than others, but on the whole Saints Row IV is great fun, very funny at times, and an excellent alternative to the sometimes all too realistic world found in GTA 5.

On PS4 and Xbox One the game has been given a slight spruce up, but considering the original on Xbox 360 and PS3 didn’t look too hot to begin with, the result is a game that looks decidedly bland compared to current-gen stablemates. On PS4 (the only current-gen version I’ve tested), the world is notably sharper thanks to a 1080p resolution, and the frame rate is noticeably better than on the old consoles. Whereas the PS3 and Xbox 360 struggled to hit 30, the PS4 game often hits 60 – although it’s a shame this isn’t consistent given the dated visuals on show.

Improvements may have been made on top of these two most basic and expected areas, but I couldn’t see any. There’s still a fair bit of pop-in as you move through the city, the world isn’t nearly as detailed as you’d expect from a current-gen title, and character models are pretty basic when stacked up against games such as inFamous Second Son. Theres doesn’t even seem to be any form of anti-aliasing, which results in a jagged appearance that fights against the higher resolution. Essentially, a reasonable PC can easily produce a better looking Saints Row IV experience, and that is disappointing.

If you haven’t played Saints Row IV or couldn’t get on with the lacklustre presentation on old-gen consoles, this is (PC version aside) the best way to go. If you’re expecting (or demand) a makeover similar to that seen in last year’s Tomb Raider Definitive Edition, though, this is a long way from being that.

Gat out of Hell

Brand new to the Saints Row world is Gat out of Hell, a standalone expansion to Saints Row IV. The President is summoned to Hell after the gang mess about on a Ouija board, with Satan deciding that El Presidente is the ideal man to marry his daughter, Jezebel. It’s up to Gat and Kinzie to enter Hell and save their leader.

Although it’s a solid set-up, boasting a new location to explore (why wouldn’t Hell be a durgy city complete with condemned souls walking around like normal citizens?), this expansion is essentially a series of activities tied into one big mission. There’s almost no creativity in what you’re asked to do, with each ally in the world asking you to perform basic tasks until you eventually fill a meter allowing you to face the ruler of the underworld himself.

The addition of wings means freedom of movement, and barrelling around the city is very enjoyable: swooping down in and around skyscrapers is one of the expansion’s most enjoyable aspects. Sadly nice gravy on a plate of dry Ryvita. You can reach the credits in well under a day’s play if you don’t get stuck on any of the activities (some of the flying courses can be tricky), but you’ll have become aware of the repetitive nature of it all well before then.

Humour and silliness was one of Saints Row IV’s big plus points, often producing proper laughs and at worse a few wry smiles. Gat out of Hell rarely touches the high points of IV, with only one musical interlude sticking in my memory as anything of note. A couple of your allies have some witty remarks to offer, but I wouldn’t say they ever really did more than slightly amuse.

On the whole there’s a distinct underuse of the setting. The whole thing is in Hell, but it doesn’t really feel like it aside from the lava pits and unpleasant pedestrians. Maybe that’s the joke, that city life is no different to life in Hell, but in a video game series now so entwined with satire and off-the-wall ideas, it all feels a bit safe.

Disappointments with the improvements made in Saints Row IV’s transition from last-gen to current-gen aside, this is still a much better way to play the game than console owners have had before. Issues with the dated visuals soon fade away once you’re into the game, and there’s really no other open-world experience like this. I’d have liked the port studio, High Voltage, to have more fun with it, perhaps playing up to the fact that the game is now on new consoles, but that wasn’t to be. As a bare-bones port, this does the job but nothing more.

Gat out of Hell gives you more stuff to do, and is mildly entertaining while it lasts, but it’s not a patch on the core game it comes with. If thought of as the side course to the main dish, this is fine. Newcomers will find a lot to enjoy, but there’s little reason to return if a dive into Hell is what you were looking forward to.

Newcomers will find a lot to enjoy, but there's little reason to return if a dive into Hell is what you were looking forward to.
7 Proper funny moments Core game is still great fun Gat out of Hell isn't great Visually it's nothing special

Saints Row 4: Re-Elected/Gat out of Hell

Saints Row 4: Re-Elected/Gat out of Hell