“Exuberant laughter.” This is the phrase used in the subtitles to describe the sound made by Vex, the villain of Sackboy: A Big Adventure. It falls laughably short. He is voiced by Richard E. Grant, for whom exuberance comes in many flavours. He can spike it with mania. He can oil it with sleaze. He can slur and blur it with booze. And, if pushed, he can play it straight. Here he goes for bendy, which makes sense, given that Vex has a body of yarn that weaves its way around as if caught on the wind. He is gloved, waistcoated, and caped in purple, and his brow is a furrowed bolt of yellow felt. We know that he is a villain, because his eyes and his grin are illuminated, like a halloween lantern, but we like him. Why? Two words: exuberant laughter.

The story is set in the Dreamiverse, which is described as “an ever-changing stream of Dreamers’ imaginations…” Wait. Sorry, my mistake. The story is set in the Imagisphere, which, we are told, is “made up of all the creative thoughts and ideas anyone has ever had.” Quite. We aren’t just told this, mind; we’re told this by Dawn French, who voices Scarlet, a kindly sage of cloth and stuffing, who introduces us to Craftworld, and to our hero, Sackboy, whose life, in the village of Loom, is one big party. Sackboy, like Scarlet and his fellow-Sackfolk, is stitched together from thick material. He has a zip up the front, black beads for eyes, and a smile of gaping darkness—a tear in the fabric of his face that, against all odds, manages to be endearing. 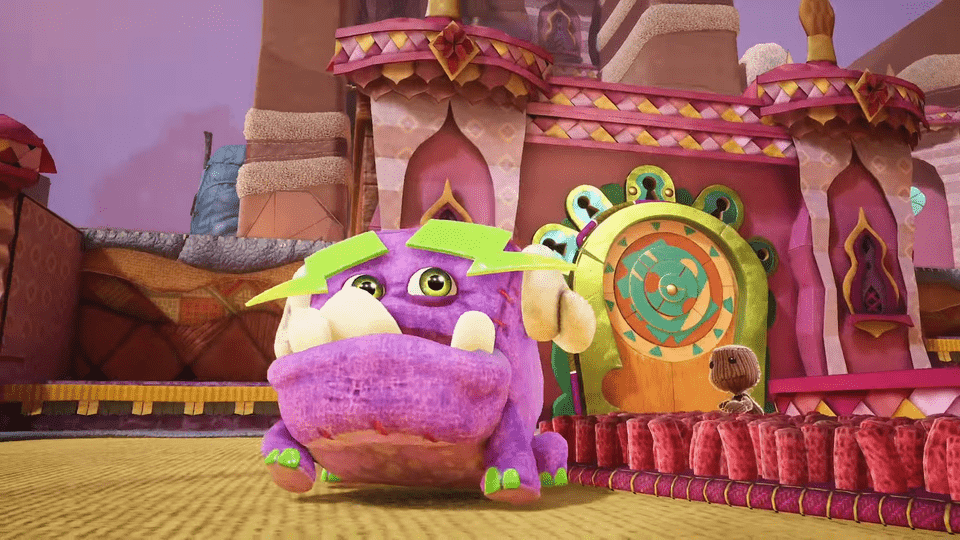 We have seen him before, in LittleBigPlanet, from Media Molecule, a studio that has never been content merely to make games, and likes to coax us into the job whenever possible—“Play, Create, Share,” went that series’ tagline. Sackboy: A Big Adventure is a spin-off: a linear platformer, locked against our creative meddling, developed by Sumo Digital. And I like to imagine that Vex, who crashes into town and sucks up all the Sackfolk with a contraption called the Topsy Turver, is sticking up for those of us who, at the end of a draining day, would much rather the traditional arrangement of Play, Enjoy, Keep For Yourself. Nevertheless, you (“Craftworld’s biggest spoilsport,” according to Vex) must leap, roll, thump, and—this being a launch title for the PlayStation 5, with its DualSense controller—feel, grab, and rumble your way through the planets of the Imagisphere, to foil his fuzzy schemes.

The game is also available on the PlayStation 4, for the LittleBigPrice of £49.99; but the PS5 version, £10 more expensive, boasts a bundle of advantages: quicker loading, extra detail crammed into the frame, and haptic feedback, to swathe your hands with authentically scratchy texture. The art direction, by Joel Smith, doesn’t stray from Media Molecule’s signature style, wherein the landscape appears to be assembled by an overskilled nursery group with a bottomless arts and crafts budget. A starry night sky is, in fact, a sweep of blue silk, studded with sequins. One planet, the supremely named Crablantis, lies underwater, and bustles with foam fish and woolly coral, while cardboard seahorses slide across the backgrounds. It may be churlish to point out that the aesthetic made more sense when we were being handed the creative tools—when the complex code of game development was being dreamily recast as crayons and glue. Here the visuals have a thrown-together clamour, and the quirks are piled high in the hope of charming us. 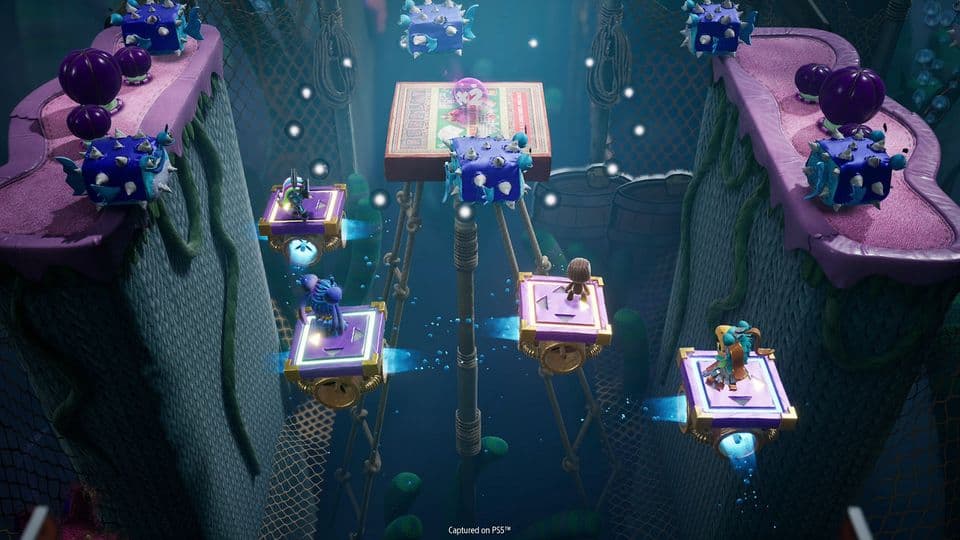 Does it work? Well, yes, but I’m pretty sure that it cheats. The action cribs lovingly—and wisely—from Super Mario. Note the overworld, where the path to each new level is laid with an unrolling carpet; and the platforming, with its collectible bubbles, its enemies that stack atop one another, and its vacuum-powered pipes, which deposit you into hidden chambers. This is far from a criticism, of course. You can hardly make a platformer of any sort without snagging your elbow on ideas that were dreamt up first by Nintendo—most of which sprang, from the Imagisphere of Miyamoto’s head. We need only praise the good taste of Sumo Digital for tipping its cap to the best and plumbing the genre’s richest depths.

Where Sackboy: A big Adventure proves most winsome isn’t in its play but in the surfeit of its surrounding glitter. The soundtrack, for example, is outrageous, thronged with hits that thrash out for certain set pieces—Uptown Funk, by Mark Ronson; Toxic, by Britney Spears; Jungle Boogie, by Kool & The Gang, etc. Like the art style, the licenced music is happy to be a jumble, though I did relish, in one level, the thematic significance of Madonna’s Material Girl. There is a raft of costumes and clothes to mine—googly eyes, tridents, butterfly wings, ninja masks, and so on. And, in so far as replay value goes, there is local co-op, which is ripe with opportunities for mischief. Playing with a friend, I was heartened to find that Sumo Digital had included the option to thump them over the head whenever the mood took me—which it did mainly during the end-of-level polaroid snaps, just as they were posing for the camera. 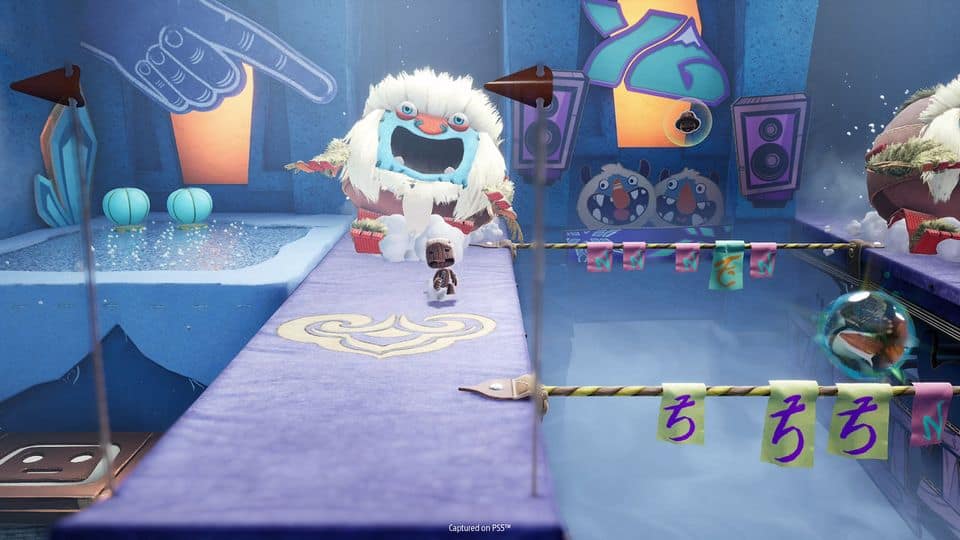 Why, then, should it leave me feeling hesitant? It has something to do, I suppose, with the way that the plain and perfectly well crafted platforming is spangled with the flash of production. The game’s best moments are those infused with great songs, looping and hooking their way into your memory. And I was helpless to resist, while in the thick of play; it was only afterwards that I started to impugn the joys on offer. Perhaps Vex was right: maybe I am Craftworld’s biggest spoilsport. One reaction to seeing Sackboy dressed up as a yak—complete with plush horns, fur, and a flapping tongue—and pouncing his way through a level lined with spikes while Let’s Dance, by David Bowie, blasts forth would be to say, “It’s possible that I’m being manipulated here.” Another reaction would be to enjoy yourself.

Where Sackboy: A big Adventure proves most winsome isn’t in its play but in the surfeit of its surrounding glitter.
8 Platforming Richard E. Grant Music Being suckered Being suckered