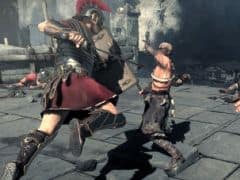 Ryse is a game that’s perfectly aware of what purpose it serves. I’d wager no one from Crytek is expecting any Game of the Year awards: Son of Rome exists to give you instant satisfaction – the sensation that the hundreds of pounds you just spent on Xbox One were worth it.

It does this, of course, by pulling out all the graphical tricks it can muster. From start to finish, Ryse is a constant joy to look at and ticks all the boxes in order to sell its tech: lush forests, awesome vistas, ancient Roman architecture. There’s not a single moment its engine and direction doesn’t impress in some fashion.

That’s what Ryse is, and was always going to be, though. When it comes to the rest of the game, it’s hack ‘n’ slash all the way. With a combat system that borrows ideas from the Arkham series, you never do anything in Son of Rome other than stab people in the face. It stands out on its own by introducing an execution mechanic -holding RT after whipping someone’s ass will see foe’s glow in a certain colour, indicating which button to push to get the best combo possible.

You don’t have to follow this guide – if you mash the pad Marius will still slice someone’s arm off – but to get the most out of any fight it’s essential, especially if you want to acquire more points to put towards the various upgrade options. ‘Valour’ earned through fighting can then be spent on buying health buffs/more executions and so on.

Ryse is simple, but the game has a certain moreish quality to it. It’s without doubt repetitive, and replicates its few ideas constantly across its six-hour running time, but I couldn’t help but enjoy it. For all its idiotic and straightforward ways, anyone who gets this day one with their console will, at the very least, have a wry smile on their face.

It’ll vanish from your brain as soon as you’ve finished it, but before that, Ryse is oddly fun.

The visual showpiece for your Xbox One.
7 So very, very pretty. Combat is straightforward but entertaining. Multiplayer not a strong enough reason to play it once you're finished. Literally has one idea and runs with it.