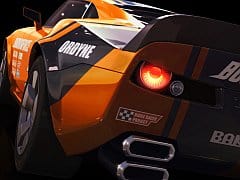 It’s Ridge Racer. That’s not me trying to be clever by bringing up that legendary moment from E3 a few years back. I’m just saying that Ridge Racer 3D is Ridge Racer. That, in many ways, is all that needs to be said if you’ve ever played a Ridge Racer game before – unless you’ve only played the awful DS game or the quite terrible iOS versions.

You drive cars, usually at very high speeds, drift them in insane ways around corners and use nitrous to boost, all the while trying to take first place in what is best described as a parade of opponent racers. While boosting wasn’t around from the beginning, the rest of that sentence could be used to describe every classic Ridge Racer in existence.

As is always the way, the opening races are – by later standards – achingly slow and simple. The game’s structure, built around a series of Grand Prix events, means that for the first few hours anyone with even a brief history with Ridge Racer will find themselves bored by how easy winning is. It’s not until tier 2 cars are unlocked that things start to heat up.

A considerable bump in top speed turns what was a fun but somewhat relaxing jaunt around a series of tracks into a blistering battle against a bunch of nippy rivals as you try to cling on to the racing line. The powersliding has no standing in reality whatsoever, with corners being taken at 300+kph, your car gripping the tarmac like it has cut its own groove.

Some effort has been made to simplify sliding for newcomers (heresy in my book), meaning you can start a slide by pressing a button and exit a slide by releasing the button. While there might be an argument for including it, I hope most people won’t use it as learning how to and then perfect the control of powerslides is the best part of the Ridge Racer experience.

In terms of progression there’s not much more than unlocking new cars and tracks, while points earned can be spent on nitrous upgrades and race bonuses, such as a pre-filled nitrous meter and an automatic speedy start. It feels like cheating at first, but with an abundance of points just sitting there I felt I might as well buy whatever I could afford.

As for 3DS extras, it’s more a case of 3DS omissions. Yes, there’s Street Pass support, meaning you can share ghost lap data with other players, but multiplayer is limited to just four-players over a local connection and with each person having their own copy of the game. There’s no online play or functionality such as leaderboards, and no Download Play – the ability to let a friend play with you without owning a second copy of the game.

If you’re after a title to show off the 3DS’s graphical capabilities I’m not sure this is it, but played using the bonnet cam the 3D is impressive, delivering a great sense of depth. Rather disappointingly the frame rate takes a dive at times and the courses themselves aren’t especially detailed.

Comparisons to the now ancient Ridge Racers on the PSP don’t do this new 3DS version any favours, either. On 3DS the game might look a tad better, but it should be leaps and bounds ahead of a game that hit Japanese stores in December 2004. Back then the PSP game wowed and made people sit up and take notice of Sony’s handheld. Ridge Racer 3D blends into the crowd almost unnoticed.

Ridge Racer fans are used to this, but it’s worth pointing out that the majority of content here is reused from older games. You get some tracks from Ridge Racer, Revolution, Rage Racer, Ridge Racers, RR6 and RR7. Unless well hidden there only appear to be three new tracks. For newcomers this won’t be an issue, but for long-time fans there’s precious little new here, and as a compilation a lot of good tracks are missing.

Something fans of arcade racers will appreciate is the in-game announcer, who will take you right back to the 90s. Not so good is the incredibly annoying female commentator who seems intent on putting you down at every opportunity. There’s also an excellent soundtrack, which includes many old favourites and 15 brand-new tracks – which you can listen to while watching any saved replays.

Neat 3D, a great sense of speed and a tried and testing handling model make this a highly enjoyable racer on the 3DS (easily better than Ubisoft’s Asphalt), but this is a game missing essential features. The lack of online multiplayer in this day and age is unforgivable, visually the 3DS can do a lot better and many people will have played most of this before – numerous times.

The good news is that with Ridge Racer, Namco has a winning formula; a racing recipe so good that it doesn’t need any extra seasoning. So, Ridge Racer 3D is, almost by default, one of the best titles in the 3DS launch line-up. In fact, I’d rather play this than any other game currently available for the system, but that doesn’t forgive the many signs that Namco rather rushed this out of the door.

Ridge Racer 3D is, almost by default, one of the best titles in the 3DS launch line-up, but that doesn't forgive the many signs that Namco rather rushed this out of the door.
7 3D is impressive Classic gameplay Seen most of it before No online play