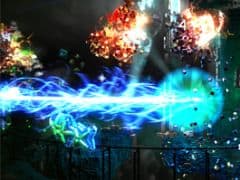 by Christopher Bratt on Dec 3, 2013
No Comments

Resogun is a simple game in many respects. But don’t be fooled into thinking it’s just another good-looking shmup with a lively soundtrack: beneath its obvious aesthetic appeal is an extremely well-crafted title. Frantic yet skill-based, engaging but not infuriating, its gameplay is as appealing as its voxel-based graphical style.

Set against the backdrop of five stages which don’t scroll (the player moves either left or right around the circular map), you’ll have to combine killing aliens (and massive end-of-stage bosses) with rescuing human prisoners to increase your all-important score multiplier.

Freeing said humans from their new alien overlords is technically an optional objective, but proves vital if you’re after a respectable score. Completing each level won’t prove too much of a challenge for experienced players: enemies constantly spawn, but it isn’t a constant bullet hell and your upgrades – such as a boost and overdrive, which freezes time – are effective equalisers. Finishing a stage while saving all ten of those pesky hostages, however, is a different matter entirely.

It adds yet another constraint to worry about, as you rush to unlock and then rescue each survivor within the small window of time provided – giving a welcome sense of progression leading up to the stupendous visual treat of a boss fight that concludes every mission. Five maps may not sound like much at all, but if you care about high scores and public leaderboards, there’s an awful lot of replay value up for grabs.

It’s a game where focus is rewarded, and as such there’s a welcome emphasis on using the PS4’s hardware to relay information to the player without compromising their concentration, such as the pad-based speaker barking instructions. It’s one of a number of smart changes introduced by Resogun to a genre that relies heavily on repetition, helping ensure that this ridiculously intense game is a pleasure to restart over and over again. Easily my pick of the launch titles.

Amidst a pretty lukewarm lineup of launch titles across both platforms, Resogun absolutely shines.
9 The feeling when you complete a run without losing a single human. Excellent aesthetic. Bursting with energy and compulsive appeal. May seem rather short, unless you’re battling over high scores.