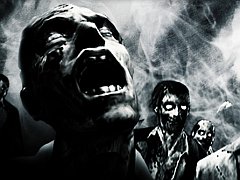 Never let it be said that Capcom doesn’t try to look after its hardcore fans. Resident Evil: Umbrella Chronicles will have every Resident Evil fan salivating at the mouth, twitching in anticipation and experiencing all those other bodily reactions we go on about when we’re excited about a game. It’s a shame then that while UC is decent fun and one of the better-looking titles on the Wii it feels as if it could have been a whole lot better.

Umbrella Chronicles retells the first four Resident Evil games, Zero, 1, 2 and 3: Nemesis, as an on the rails, House of the Dead style shooter. You point your Wii Remote, or the Wii Zapper if you have one, at the screen, move the targeting reticule about and shoot at endless zombies, bats, undead dogs and, most annoyingly of all, leeches. While you can move the camera in a very limited fashion with the Nunchuck analogue stick, movement is predetermined by the game, taking you on a journey through settings any Resident Evil fan will find familiar.

For the Resi Evil canon enthusiasts out there, the ones who would ace Mastermind with a chosen subject of: “Resident Evil series of games, from 1996 to present”, let’s deal with what UC covers. The game is divided up into four main chapters, each with two different playable characters. Somewhat disappointingly there’s no gameplay difference between the characters – all play exactly the same. But you do get different cutscenes depending on what character you pick, some of which fill in plot details.

The first chapter deals with Zero, offering up rookie STARS member Rebecca Chambers and convicted US marine Billy Coen as playable characters. The second chapter moves on to the original Resi Evil game, with STARS members Chris Redfield and Jill Valentine as playable characters. The third chapter, which sees Jill and UBCS solider Carlos Oliveira as controllable characters, combines Resi Evil 2 and 3: Nemesis, which is a major disappointment – Resi 2, in my opinion one of the best Resi games, is hardly touched upon at all. The fourth and final chapter in UC, Umbrella’s End, is completely new to the series. It takes place one year before Resi Evil 4, which, incidentally isn’t dealt with at all by UC – another major disappointment (deliberately ignored for a sequel?) and five years after Raccoon City bites the dust.

Perhaps of most interest to hardened fans will be the bonus sections included in each chapter. These bonus sections allow you control familiar characters from the Resi universe, including mysterious plotter Albert Wesker, who narrates the UC story, secret agent Ada Wong and Umbrella Special Forces member HUNK. It’s here that fans will glean the most new info on the series’ story. In short, playing UC is like letting Capcom’s fans loose in a Resident Evil candy store with a bag full of change.

So while fans will be delighted to be given the opportunity to play through what is essentially a short synopsis of the first four Resident Evil games, all everyone else cares about is whether the game is fun to play. The answer is yes, resoundingly, but there are some problems which let it down.

The first of which is the divisiveness of the genre itself. As they say of Marmite, you either love it or hate it, and so it is with on-rails shooters. The thing with UC is that it does absolutely nothing new with the genre, so if you like light gun rail shooters like House of the Dead, or even Time Crisis, you’ll probably find lots to like with UC. Conversely, and unfortunately if you’re not a fan of the genre, there’s no effort from Capcom to revolutionise the genre so that its appeal might extend beyond the hardcore. Perhaps this is no bad thing, perhaps it is. Perhaps Capcom’s philosophy when designing the game was to concentrate on doing the basics of the genre right, which it spectacularly failed to achieve in past years (I’m looking at you Survivor).

This is how it works: you point the Wii Remote at the screen and shoot with A. It doesn’t really get more complicated than that. You reload by shaking the Wii Remote, which also helps shake off zombies who get close enough to jump on to you, and switch weapons with the C button. You’ve got a pointless knife attack, which just involves quickly moving the Wii Remote from side to side to protect against leech attacks and the odd scripted event where you need to quickly perform a button press or shake the Wii Remote to dodge an attack.

There’s a splash of tactics involved, which only really boils down to saving your machine gun and shotgun ammo for the hard as nails bosses, but for the most part you’ll be trying to relieve zombies of their heads with the handgun, which is surprisingly satisfying – Capcom has managed to reprise that classic meaty head pop feel from the traditional games in UC.

As mentioned above, you can move the camera in a limited fashion with the Nunchuck analogue stick, but you’ll only be doing that when trying to shoot up the scenery on the hunt for weapons, ammo, health giving herbs, life preserving first aid sprays and bonus story material. For the most part it’s a case of trying to be as accurate as possible as quickly as possible, which is no mean feat – played on anything but the easy difficulty level UC is pretty hard.

This is where my major beef with UC comes in. Wielding the Wii Remote is simply not as accurate as using a light gun in say Time Crisis or House of the Dead. This has nothing to do with the game per se, but a lack of calibration offered by the Wii. Because of the way the Wii works I’m not sure on the rails shooters on the console can ever be as intuitive or as accurate as light gun games on others. As monster upon monster darts about the screen inexorably wearing down your life bar, it can be a frustrating experience missing not because you’re crap, but because the targeting reticule is so hard to control. Being great at UC requires accurate shooting of enemy weak spots, whether that’s a head shot or otherwise. Unfortunately this is almost impossible on the Wii.

Apart from this though UC is a thoroughly decent effort. Compared with other third-party efforts on the system it looks like a game from the future. The graphics, while oddly below Resi Evil 4 standards, are surprisingly good, with nice lighting effects, destructible environments and lovely cut scenes. We’re not talking 360 or PS3 standard here of course, but having played through some of the dirge available for the Wii UC looks reassuringly polished.

You’ll get a checkpoint roughly every 10 minutes or so, and the game itself won’t take you longer than 10 hours to complete, so it’s well suited to casual play. It’ll last you longer if you’re bothered about all the collectable background dossiers and files, or getting the S grade for each level. If you’re not a Resi fan it’s worth a rent. If you are it’s worth a purchase. Either way you’ll have a thoroughly decent blast.

If you're not a Resi fan it's worth a rent. If you are it's worth a purchase. Either way you'll have a thoroughly decent blast.
7 Good graphics for a Wii title Plenty for Resi fans to sink their teeth into Resident Evil 4 ignored Accurate aiming is very difficult