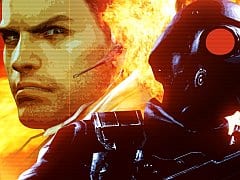 The idea is simple: shoot as many of those wretched Majini as possible before the timer runs out. You can change your choice of character, weapon and environment, but essentially it all boils down to shooting zombies (well, zombie-like enemies) in the face as quickly as possible. This isn’t a criticism of the experience itself – Mercenaries 3D is a score attack game, after all – but I question its longevity; you don’t get much bang for your buck here.

Many people will be familiar with the Mercenaries mini-game already, it having appeared in Resident Evil 3, 4 and 5. For the 3DS debut Capcom has bulked the mode up with some unlockables and then slapped a £34.99 price tag on the box. There’s no narrative to stitch it all together, no crappy dialogue, no dodgy voice acting – just you, a bunch of zombies and a score counter in the top-left-hand corner of the screen.

At the start of the game, you’ll be presented with a choice of three zombie-hardened mercenaries: the log-armed Chris Redfield, Jill “master of unlocking” Valentine, and Hunk, who insists on wearing that silly gas mask even though nobody else does because the viruses responsible for the zombie outbreaks quite clearly aren’t airborne. After working though the 20 missions in the game – each set in memorable locations from Resident Evil 4 and 5 – players can look forward to unlocking Claire Redfield, Rebecca Chambers, Barry Burton, Jack Krauser and Albert Wesker.

Each character is defined by the three weapons in their arsenal, as well as melee finishing moves. Jill, for example, has a machine gun, shotgun and knife. While the latter lacks the ferocity of a gun, it isn’t limited by a finite supply of ammo. For her finishing move, she leaps into the air, bombing bent knees into the hideous face of her downed opponent. Krauser quickly became my mercenary of choice thanks to his bow and unlimited stock of arrows, which – with a decent headshot – is a one-hit kill.

It’s an all-star cast in the enemy department, too, with such favourites as Black Zombie, Woman Zombie, Dude with the Big Axe, Bag-Head Chainsaw Man, and those robed priests with the creepy masks. Latter levels throw them all at you once, making survival that little bit more difficult.

Unlike most of the games in the Resident Evil series, Mercenaries 3D has the ground-breaking feature of being able to move and shoot at the same time. Not only this, the default control scheme is set up in such a fashion that taking aim – by tapping the R button – shifts to a first person perspective. If first-person isn’t your shtick, however, you can switch to the over the shoulder view that Resident Evil 4 pioneered. Whilst aiming, you can then press and hold L to move. Although you can shoot while moving, you can’t aim, leaving you with a locked strafe. That’s the trouble with having just the one analogue stick, you see.

Depending on your rank in each mission – which can be anything from a D to an SS – you can expect to new earn skills for each of the eight mercenaries. These include anything from restorative powers to improved weapon handling to increased critical hit rate. Each character can equip up to three perks, allowing plenty of options for strategy. There are 30 to unlock in total, but this is a slow process. Improving what would otherwise be a poor progression system are extra costumes and medals, which reward specific actions in combat with a nice shiny medal.

As with many games of this ilk, combos are the way to big scores. String together kills quick enough and you’ll be awarded extra points. It concerned me how little I cared about my score, though. For a game that’s all about racking up as many points as possible, it would have been nice to compare that number with friends. Mercenaries 3D is crying out for online leaderboards in some form, but sadly they are myseriously absent. Without such a feature, it’s incredibly difficult to muster any drive to replay levels over and over again – which is really the thrust of the whole package.

There is both local and online co-op, however, which boasts a solid netcode and no signs of lag. In this ‘duo’ mode, both players contribute towards the combo, resulting in much higher scores than singleplayer. That said, there’s obviously no support for voice-chat on the 3DS, so conveying a strategy plan to your partner is hard work.

The game is graphically accomplished but the frequent animation problems stick out like a sore, mangled thumb. Distant enemies are missing frames of animation, resulting in a horrible jerky motion. What’s worse, you can literally see the moment where the animations are swapped – the exact point when an enemy crosses the threshold and they gain a few more frames.

The fast-paced, score-orientated nature of Mercenaries mode remains intact for the 3DS version, but even with all its bells, whistles and ‘duo’ co-op play, it never feels like a ‘proper’ game. There is a demo for Resident Evil: Revelations on the cartridge, which is indeed a ‘proper game’, but as this is over in a minute or two, it’s doesn’t offer much of an incentive.

If you’re not entirely sure whether you’re going to enjoy The Mercenaries 3D or not, ask yourself this: is £35 too much to spend on a mini-game ripped out of Resident Evil 4?

The fast-paced, score-orientated nature of Mercenaries mode remains intact for the 3DS version, but even with all its bells, whistles and 'duo' co-op play, it never feels like a 'proper' game.
6 Plenty of unlockables Graphically pleasant Shoddy animations No leaderboards