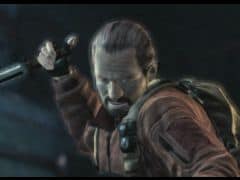 Capcom’s latest run at an original Resi after the assault on sense that was Resident Evil 6 may be using a new format (and series favourite Barry Burton) to entice fans, but it’s Revelations 2’s mix of styles old and new that truly appeals. By tying the later games’ co-op, combat, and viewpoint together alongside the original trilogy’s resource management and item hunting, Capcom has built something that will please its audience, as well as providing a solid foundation for later instalments.

Episode 1 kicks off with Claire Redfield and Moira Burton, Barry’s daughter, being kidnapped and confined to a remote prison. The motives of the kidnappers aren’t clear, but in true Resi style the island also doubles as a torture site, overseen by someone who a) hates cleaning up, and b) loves talking in weird riddles. As Claire and Moira (and later, Barry and Natalia), you’ll have to explore the abandoned buildings and surrounding grounds in a bid to escape.

It’s a standard setup, especially for this series. But it is effective, not least because the small cells, snaking corridors and poor lighting give your enemies places to hide. Most adversaries resemble zombies in appearance, but in action they recall the more aggressive ganados, again a mix of some of the best elements of Resi old and new. Their quickness in chasing the player down is unsettling: despite shambling appearances, most foes are surprisingly adept at closing distances, and the small environments mean it’s easy to be overwhelmed.

Couple this with the lack of ammo – and your general weakness to enemy strikes – and Revelations reveals its particular brand of horror as being based on panic. It’s a game which asks you to shoot precisely, lest you run out of ammo. But enemy movements are so unsettlingly quick that it pressurises even the simplest shots, creating a powerful dynamic that introduces doubt at the exact time you want there to be none. There’s almost always a brief window for Hollywood-style ‘hero’ moments, the last-ditch clutch shot. But there are far more chances to miss, which ratchets up the intensity.

When you’re not shooting, of course, you’ll be hunting for items to help you navigate the world.The puzzles you’ll encounter don’t stray much further than recovering the right key for the right door, or finding a cog to open a suspiciously Capcom-y mechanism. But given the short running time of the episodes (around 40 minutes for each character) their relative lack of complexity makes sense, inasmuch as they’re meant to dial down the action and give the player – and the world – space to breath.

For the most part, however, Resi Revelations is surprisingly tense. Its visuals play a part in this, but not to the extent you’d anticipate: its overall look is distractingly gaudy, often playing reds and greens off against each other, and its texture work on interior fittings can be outright terrible: low resolution and distractingly flat. It is, essentially, a last-gen game prettified. But its audio is superb, especially the driving, jumpy combat score, feeding a feeling of vulnerability here that’s been missing in Resi for a little while.

Part of this vulnerability is also due to the fact that your partner is much weaker than you are. Moira is foul-mouthed and aggressive, but the only shots she’s firing are verbal, preferring instead to use a crowbar in combat. Natalya is a child, whose weapons skills extend to bricking zombies, which automatically makes her the most well rounded character Capcom has ever produced.

In single-player, this means that you’ve got to watch your own back, but also ensure the safety of the rather helpless individual you happen to find yourself with. In co-op, those playing as the weaker of the two must find time to use their unique skills (Moira’s flashlight can blind enemies, while Natalya can ‘sense’ nearby zombies and point them out), while relying on their friends to do the heavy lifting. There’s plenty of room for error on both sides.

Episode 1 is short by design, but it’s well-paced, building to logical, well signposted and satisfying end points for both Barry and Claire. It also makes sure to offer something different with each of its protagonists. Thier adventures on Zombie Island occur in the same location, but not at the same time, enabling Capcom to play around with the previous character’s effect on the environment, much like in Resi 2. Like that game, each protagonist has different weapons: when Barry turns up, he is perhaps the only person in the history of the series that has gone to somewhere they know is dangerous with the weapons they actually need.

The game quickly subverts notions that his playthrough is going to be all-out action, however: ammo is still scarce, and different, more powerful enemies are thrown in. Barry’s unexpected vulnerability leads to the most effective set piece of the episode, with players being chased through a forest by zombies that only die when their limbs are blown off.

Overall, Episode 1 is a solid start to Revelations 2’s broader story. Narrative threads are dangled well: why is Moira so afraid of guns? Did her father accidentally kill her mother, Barry-style? Is The Burtonator too late to rescue his family? Why is Natalya on the island? And who is this mysterious woman that keeps taunting them relentlessly?

These are all to be answered in later chapters. So far Revelations is ticking along nicely, especially given that it also features the score-attack Raid mode, where players fight hordes of zombies to earn medals and upgrades for their characters. It’s fun, with a compulsive quality and a constant glut of rewards to keep you playing and earning more weapons, perks, and Yet More Stuff for your build(s), even if it lacks the time pressure and one-more-go appeal of Mercenaries. At five quid, however, there’s no going wrong here.

An intriguing start to Capcom's episodic adventure.
7 Well-paced, enjoyable episodic structure. Great value for money. A combination of some of the best elements of Resi. Visuals don't hold up well on new-gen.