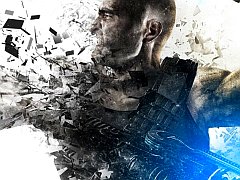 There are times when Red Faction: Armageddon is great: when you’re firing rockets at the pillars supporting a bridge and watching the Martians on top get swallowed by rubble, or using the Magnet gun to send an explosive barrel into an alien-infested structure and creating a firework display of bodies and debris. But outside of these isolated instances, Armageddon doesn’t have a whole lot to offer.

From the bald-headed tattoo-armed protagonist, to tired enemy design and generic objectives – Armageddon feels like a hodgepodge of everything the third-person shooter genre has done a hundred times before. To be clear, the mechanics underpinning the game are sound; there’s little to flaw here in terms of design. But the experience as a whole is uninspired.

Blame Darius Mason. He’s the reason you’ll fight a seemingly endless horde of bug-like aliens – the root cause of Armageddon on Mars. And even though he was tricked into awakening this long-dormant race of evil Martians by an evil Marauder priest, the guilt of being fooled into doing so spurs him onwards to purge the lot of ’em from the planet. So while the colonists of Mars might think Darius is one of the bad guys (and he has a sharp tongue to match this perception), we know otherwise.

The ten-hour campaign that ensues involves tracking down the fanatical bastard that set the wheels of the Armageddon in motion, and riddling anything that stands in your way with bullets. Lots of things stand in your way. After three or four hours of employing the same tactics to kill the same three or four enemy types, things start to get tiresome. Objectives such as “defend the convoy!” and “collect the power cells!” do very little to mask the repetitive flow of play.

The second half of the game is more interesting. Vehicular interludes break up long stretches of gunplay, with even a dreaded turret shooting gallery offering a welcome change of pace. You’ll plod about in mech-suits and pilot mechanical scorpions, each with its own infinite supply of rockets and lasers. In the final hours of the game, there’s certainly more variety to the action and the pace ramps up considerably because of it. While vehicles aren’t as numerous as they were in Guerrilla, these sections of the game hold up well.

There’s certainly no shortage of interesting weaponry. In addition to the usual slew of pistols and shotguns, there are nano-rifles, plasma guns and rocket launchers. As well as being functionally interesting (the nano-rifle disintegrates an enemy on impact), they’re brought to life with some impressive aural accompaniment. The shotgun is particularly good, delivering its load with a hearty boom. Sound design on the whole is fantastic, with haunting sci-fi melodies juxtaposing the destruction on screen.

Although I’ve already addressed Mason’s arsenal, I feel the Magnet gun deserves a paragraph all to itself. Shoot one magnet to an explosive barrel, for example, and the other to a building and, well, you can imagine the results. The same trick can be applied to combat, too: pop one magnet on an enemy, the other on one of his pals – and BAM. I didn’t swap the weapon out of my inventory once during the course of the game.

Despite an intense apathy towards the game, there’s no denying that GeoMod 2.0 has a damn impressive appetite for destruction. You can shoot through walls to create a new path for yourself, block the routes of enemies by destroying their entry point, and bring entire buildings to their rubbley knees with a few well placed magnets. But often it can buckle under its own weight. In more spacious environments, explosions and collapsing architecture murder the frame-rate. Most of the time the game runs incredibly smoothly, but the frequent drops stick out like a sore mangled thumb.

The Nano-forge – a device passed down in Mason’s family – compliments the devastation with the ability to tamper with the laws of physics. Any man-made objects that have been destroyed in your wake can be rebuilt. So, if you’ve accidentally destroyed a bridge that you need to cross (which happens a lot) then you can simply repair it. The Nano-forge has combat uses, too. The Shockwave ability is perhaps the most useful, sending swathes of enemies floating into the air, where they’re momentarily defenceless.

An upgrade system encases all of this, allowing you to spend salvage points on upgrading your proficiency with firearms, Nano-forge recharge time and health, amongst other things. Any upgrades purchased in single-player transfer to multiplayer, which is a nice touch.

Armageddon forsakes the conventional deathmatch in favour of a Gears-inspired Horde mode. Infestation pits up to four players against 40 waves of Martians. I got bored after four. Sitting below Infestation on the main menu is Ruin mode, which is considerably more entertaining. Taking full advantage of GeoMod 2.0, the idea is to cause as much destruction as physically possible in an allotted time period. Scores, multipliers and leaderboards make this rather addictive.

As I’ve said, Red Faction: Armageddon is technically accomplished and mechanically sound. But unfortunately that’s not enough in a world of Dead Spaces and Gears of Wars. Aside from marvelling at the odd collapsing building, there’s little here to hold your attention for more than a few hours. It’s not a bad game by any stretch of the imagination; it’s just an entirely forgettable one.

Aside from marvelling at collapsing buildings, there's little here to hold your attention for more than a few hours. It's not a bad game; it's just an entirely forgettable one.
6 Magnet gun is great GeoMod 2.0 is technically brilliant Generic shooting Inconsistent frame rate

The fight goes underground in this explosive sequel.

The fight goes underground in this explosive sequel.