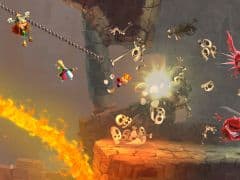 After shunting the recent efforts of Mario into a lurid green U-bend, Rayman Origins proved a tough act to follow. As a sequel Rayman Legends initially disappoints with what seems like a shift away from speedy platforming, but warms up into something wonderful after you’ve played for a few hours.

Originally planned as a Wii U exclusive, Legends is keen to showcase the Gamepad functions right from the very start of the game. Murfy is a green grinning fairy that pops up in specific levels, moving objects and cutting ropes when you appropriately poke the gamepad’s touchscreen. The problem is, most people won’t own one.

On the 360 code provided for review, Murfy’s actions have been mapped to one button. Press B, and he’ll activate whatever object he’s currently beside. Unfortunately, you can’t control Murfy’s position: the game doesn’t do a terrible job of ensuring that the green fairy is always locked on the object you’re expecting, but there’s an overall lack of precision here that doesn’t gel with the razor-sharp platforming. Anyone can activate Murfy in co-op, which immediately proves to be a bit of a nightmare. ‘Don’t touch the B button!’

Thankfully the latter half of Legends uses Murphy in a less frustrating way, and it isn’t long before the game offers up hardcore goodies: time trial trophies don’t appear this time, but instead we get loads of bastard-hard speed-run missions.

As things open up, the best level designs surface. 20,000 Lums Under The Sea blends Bioshock’s vision of velvet and brass with a classic James Bond tone. The overall aesthetic in Legends however doesn’t match the magic of Origins, but this isn’t an overly negative point: it’s like trying to compare Disney to Pixar. Stand-out moments ensure it never feels average, and the quantity of stuff to do puts Origins to shame.

A whopping chunk of Origins is playable within the game, and your ‘Awesomeness’ level can be increased indefinitely by competing in weekly and daily challenges. Rayman Legends isn’t perfect, but it’s still a cracking game.

Rayman Legends isn't perfect, but it's still a cracking game.
8 Tons of tough stuff for hardcore fans The musical levels are infrequent, but delightful Level design lacks the magic of Origins Wii U stuff doesn’t translate well to pad